FACT Rated is our series digging into the sounds and stories of the most vital breaking artists around right now. Next, Will Pritchard meets Belly Squad, whose blend of dancehall, Afrobeats and grime with ‘Banana’ landed them London’s song of the summer in 2015. Rather than ride the hype, the London trio have carefully planned their next move and fresh off a showing at M.I.A.’s Meltdown, they’ve got big plans.

There’s a joke that goes something along the lines of “How do you know when someone’s from London? They fucking told you.” Belly Squad wouldn’t need to tell you they’re from London, you’d just need to dip into their burgeoning catalogue.

A blend of dancehall, Afrobeats, grime and rap, with a dash of cocksure swagger, it’s a sonic emblem of the cultural melting pots that make up the UK capital’s inner-city boroughs. And it’s a sound – buoyed by a social media-savvy youth generation and with the indomitable J Hus as its standard bearer – that you’ll hear booming from car stereos, rumbling in clubs, and trailing out of headphones on the bus.

It’s telling that when you ask where they come from, they respond not just with which part of London they grew up in – Yung Max and Ty in Newham, Ross in Greenwich – but what their heritage is, too.

Ross, who’s of Sierra Leonean and Liberian descent, says this is important because it’s where many of the melodies and earworm hooks that make their tunes so catchy come from. Ty (Sierra Leone and Guinea) agrees: “We’re part of this new wave of music with heavy African and Caribbean influence,” he explains, “we have vibrant sounds that you can dance to, and energetic sounds you can jump about to.” 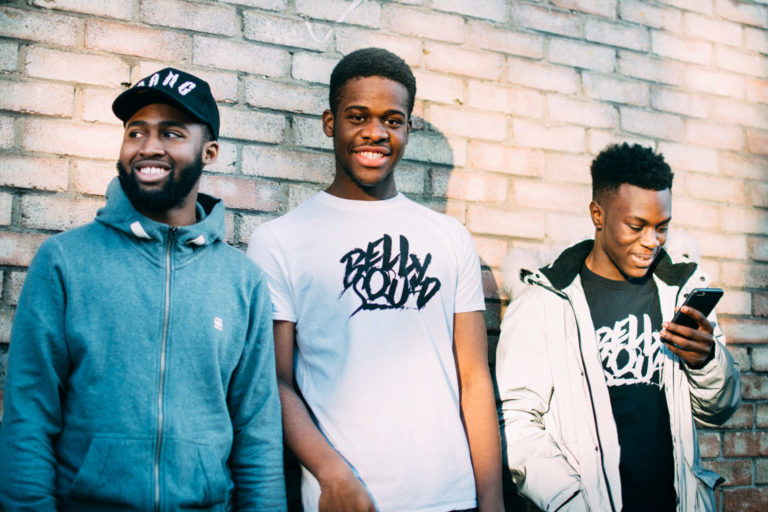 “We want to take it to as many places as we can.”

It’s the danceability that makes their music so appealing: it’s absolutely unfettered, with bouncy instrumentals and lyrics that barely extend beyond the premise of partying, drinking, and linking with girls. Every single tune on the tightly-packed Banana EP is in some way about hooking up, and the metaphors aren’t exactly subtle. Even their name is a play on the term ‘hit the belly’, and while Ty explains that it’s a reflection of their hunger for success, anyone familiar with local slang will recognize the sexual undertones.

New track ‘TMG (Take Man’s Gyal)’ continues the trend, and was produced by the same team that put together Hus’ underground anthem ‘Dem Boy Paigon’. Yung Max (Jamaica and Dominican Republic) explains that they’ve worked together plenty in the past, and that Hus is just the first to come through and find a large audience. “I wouldn’t say we’re influenced by him,” he goes on, “but he has definitely shown us where we can take it.”

Indeed, amid a swelling sea of J Hus imitators, Belly Squad are rising above the surf – thanks at least in part to patience and a firmly grounded attitude. Despite ‘Banana’ soundtracking the summer of 2015 and its official video clocking more than 1.5 million views on YouTube, the boys sat tight and waited until this year to put out a full follow-up. “[‘Banana’] opened a few doors for us,” explains Ross, “so we just wanted to build on the success we had.”

And build on it they have done. The ‘Banana’ remix has crossed the 5 million play mark in the few months since it dropped, they’ve played shows across the UK, and earlier this month they performed for the M.I.A.-curated Meltdown festival at London’s Southbank Centre.

Belly Squad’s ambitions are as global as their sound is. “We want to take it to as many places as we can,” Ross offers to a question of what the future holds, before Yung Max steps in with his own typically catchy response: “World domination.”