Gorillaz link up with Octavian for poignant single, ‘Friday 13th’

Over the last six months Gorillaz have teamed up with artists including Slaves, Fatoumata Diawara, Peter Hook and Georgia for Song Machine, an episodic series of singles and hybrid videos, in which Damon Albarn’s real life collaborators join Jamie Hewlett’s cartoon creations.

South east London MC Octavian is their latest guest, lending his gravelly delivery to a downbeat, melancholic track, ‘Friday 13th’. The timely visual features all four of the Gorillaz showing post-protest bruises and injuries and concludes with a quote from writer and playwright James Baldwin.

‘Friday 13th’ is out now. You can also catch up with the three previous episodes of Song Machine here.

Watch next: Against The Clock – Cromby 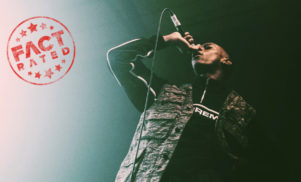