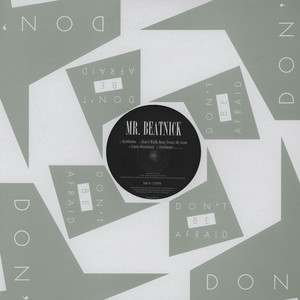 If you live in London, you probably know someone who knows Mr. Beatnick. He’s one of those guys who’s always around – whether it’s DJing with the likes of Paul White and Bullion, his various radio appearances (including past stints on Rinse FM), or just haggling with local record dealers – he just always seems to be there. The sort of guy that once you’ve met him the one time, you’ll bump into everywhere. And the sort of guy that, although he’ll never shout about it, is a better producer than most, a better DJ than most, and in possession of a better record collection than most. You don’t even need to be told it about him; you just know it from one conversation.

So it’s nice to see Mr. Beatnick’s solo productions (in the past, he’s often worked as part of production groups) start to gather a little more publicity. That’s the difference between Beatnick and most – he doesn’t publicise himself at all, and that’s why many won’t have heard of him. And it’s that modest attitude that comes across in his own music: ‘Synthetes’ is quietly regal, full of immaculately measured strings and padded kicks. The track’s lead melody falls like leaves on an Autumn day; it’s incredibly beautiful stuff, and there’s not a lot about that sounds like it.

‘Don’t Walk Away from my Love’ is classic unquantised slow house run through the tape machine, full of space and heady atmosphere. It doesn’t come to any grand climax, it just finds a groove and sticks to it, going gently about its business. It’s great headphone material, but in the hands of a DJ who can mix it long and deep, it’s got subtle potential to set off a dance floor. ‘Casio Romance’ is the slowest, and perhaps the least memorable of the original tracks here, but it still boasts a deceptively weighty bottom-end under that woozy lead, while Architect lends live-sounding percussion to ‘Synthetes’ to add some shuffle to its step. Overall, it’s an EP that quietly rails against the over-production of much modern dance music with simple but effective old school techniques, prioritising groove, space and complimentary sounds over loudness and dramatic EQ sweeps.