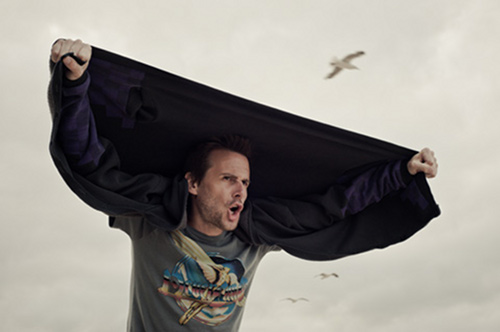 Warp mainstay Chris Clark has snipped the ribbon on a new run of free downloads.

Clark returned with his sixth full-length, Iradelphic, earlier this year. The record is the feyest – and, it must be said, quite possibly the least essential –  thing he’s done to date, a gentle collection of blushing electronica flecked with tropical guitars and breezy vocal turns. If his MUTEK performance is anything to go by, he’s also rocking a newly revitalised live set.

As Clash report, Clark is now giving away a series of offcuts from the Iradelphic sessions. ‘MFB Skank’ certainly sounds more like the Clark of old, a driving mechanical riddim that ticks along like clockwork. In Clark’s words, the trace was “recorded alongside Iradelphic in an onset of modular dementia. It wouldn’t have worked on Iradelphic’so it’s been slinking it’s way into my live show instead. I was going to put a ragga acapella over it but thought it would ruin the texture. Props to anyone that manages to pull it off over this instrumental version though! The more aggro the better I reckon.”