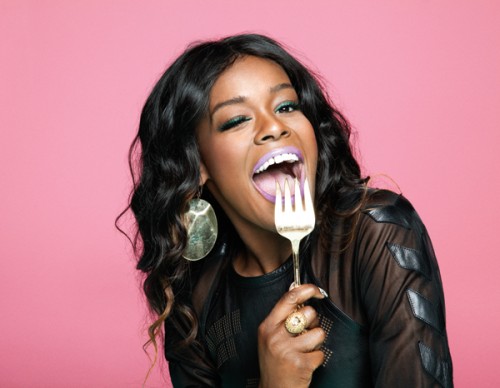 As the weekend whirred into gear, Azealia Banks continued a recent flurry of activity with a great new track.

Having finally released the 1991 EP, tripped onto Danja’s ‘Bad Girls’ revamp and turned out the Machinedrum-helmed ‘Aqubabe’, the Harlem trash-talker dropped ‘Nathan’ on Friday. It’s the first major Banks track to clock up a feature, with The LOX mainstay Styles P dropping in for a verse.

Considering how much Banks’ schtick so far has been about a sort of cussed, hypersexualised independence, it’s interesting to hear another voice entering her hermetically sealed studio space. Banks’ double-tracked voice is much more malevolent than normal, locking onto haters and promising to eliminate all enemies. Drums Of Death’s aqueous skank proves a highly effective backdrop for Banks’ tongue twisting. Banks hasn’t ventured far from the niche she opened up with ‘212’, but as long as she keeps making this sort of irresistible hay, that’s fine by us. Click below to stream or download.