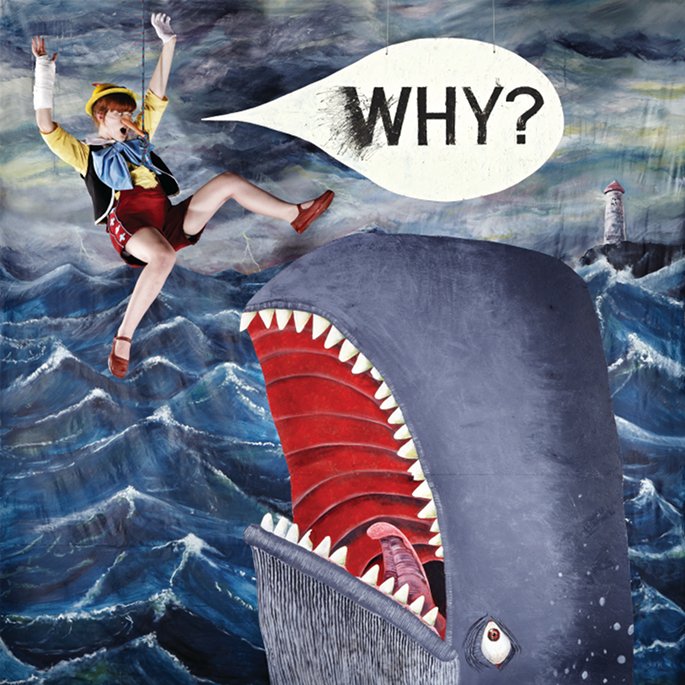 WHY?, California’s principal purveyors of piquant rap-cum-indie, are back with a new record.

Yoni Wolf cut his teeth with much-missed anticon flag-bearers cLOUDDEAD. Over the years, he’s steered WHY? from a solo bedroom indulgence to a highly regarded band project. The last half decade in particular has seen the project creep its way to the upper echelons of the indie firmament: 2008 breakthrough Alopecia has a fireworks display’s worth of flashes of genius, and the knottier follow-up Eskimo Snow saw the band on elegiac form. This summer’s Sod In The Seed was sprung from the same turf as its predecessor, although the ‘Hey Ya!’-cribbing title track showed Wolf sounding peppier than he has in yonks.

Following on from sparkling lead track ‘Jonathan’s Hope’, the band have now made Mumps, etc. available to stream in its entirety. In a marginally cagey interview earlier this year, Wolf promised that we could expect a “bit more rap stuff” from Mumps, etc., and although it’s hardly a boom-bap record, there’s an unforeseen jauntiness – cheeriness, even – to the record that gives it much more bounce than its predecessors.

Mumps, etc. is due on October 8 on City Slang. WHY? also have a European tour in the works – dates are included below. Wolf has kindly written a SparkNotes style list of footnotes for the record – you can read his typically pithy track-by-track primer below.

Jonathan’s Hope
Working title, “Mumps.” Dropping rocks. Saw a dove perched on a truck like a hood ornament. Now I know it stands for hope/rebirth/peace. Through all illness/depression/fear (Mumps, etc.), I still desire to live in the light.

Strawberries
Started writing it on my grandmother’s birthday. The start of strawberry season and the day of Wrestlemania V or VI, I believe. What was supposed to be banjo (Deliverance), ended up being marimba (Lion King).

Thirteen on High
Working titles, “End of the Night”, “Way High on Highway Thirteen”. Wrote this one in about 1/2 hour after listening to the Neil Young song “One of These Days” off Harvest Moon. Wrote it on Josiah’s Piano in Xenia while he and Liz were out at Walmart or some shit.  Demoed it in a cottage up 13 behind The Claremont in the Oakland Hills. Josiah made me rewrite the first stanza.

White English
Working title, “English.” Made music trying to copy The Game’s song “Ol’ English (prod. HiTek).” A few years between writing verse 1, and then 2 and 3. Last minute hook tweaked by Graham Marsh. Maybe my favorite lyrics of the album in the last stanza of verse 2.

Danny
For my boy Danny T. who passed on his own volition. I could also easily go that route and be swallowed up, but every day I choose not to. This is not a lottery. No bets necessary. Only blood, sweat, and tears. It takes work to keep going, but that’s what life is; doing the work.

Sod in the Seed
Try to copy “Hey Ya” with the production (obviously). Some of my funniest writing in my opinion. I’m very proud of the writing.

Distance
Initially Doug’s favorite, I think. Added melody to the raps last minute of making the demo and the song bloomed. Buffi Jacobs killing the cellos. Cajon in full effect.

Thirst
Probably the earliest song of the bunch (mid 2007). Reminds me of “The Vowels Pt. 2” for some reason. Liz Knight kills the BGVs (and Andy Broder’s in there too with the King Tut harmony).

Kevin’s Cancer
Working title “Histories of Christmas”. For Kevin Kagel; best listener an artist could ever ask for, and the sweetest man. Rest easy brother.

Bitter Thoughts
Original demo was a sample from Madmen. Liz Wolf featured in chorus talking about the rapper.

Paper Hearts
Once again trying to put some shit to rest. Once again failing. What can I say, I’m a hopeless psychotic romantic with a very big heart.

As A Card
Sort of a post script. A vow to live while I’m alive. To harness life and only accept death as the final possibility after there are no others.