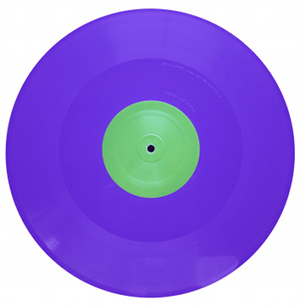 “File under: annoying rave anthems.” EVOL’s words, not ours.

The computer-controlled Hoover bass is back: EVOL have returned with their unique brand of extreme economy on Right Nightmare, the latest instalment in their continuing ‘rave synthesis’ series. And this time they have brought a friend.

Despite the lack of variation – a general description of EVOL’s work being one sound source stretched to absolute breaking point – the progression found in Right Nightmare as the latest in a series is noticeable. The material, admittedly, is only spread across two tracks, allowing the record to be more focused, but the tracks themselves are an interesting pair.

Side ‘A’ launches in with a downward pitch gesture that, purposefully or not, may be deliberate, anarchic underwhelmism (“Oh, Jesus, not again…”) but what follows becomes endearingly goofy. One constant, 8-minute, unsteadily fluctuating chord, plus chorus of detuned imitations, it is a fairly traumatic form. And yet, through the meandering and dithering of its parameters, it somehow manages to carry off an air of bashfulness. It’s kind of like a…well, like a giant, comically radioactive bumblebee, for want of a less ridiculous analogy.

Side ‘AA’, however, is voiced similarly to Hecker’s ‘Acid 245 Ph.Inv 9T2’. The voice is tightly compacted, hard at its core, the nasal buzz of a radio-controlled car being thrashed around the local park. Largely a single voice drawing a long, spasming line, it is occasionally joined by fitful octave stabs to emphasis near-melodic elements. Around the 5-minute mark the main voice joins the stabs to create about a minute’s worth of percussively scattered melody, rebounding back into more viscous gestures before climbing unexpectedly into a full on, wildly looping and re-looping laser beam assault. The final minute and a half is a harsh, sheet-like chord that collapses, just before the end, into harmonic phasing around a single note – reinforcing the uncanny similarities between ‘AA’ and a study for trombone. So yeah: file this one under Future Trombone.

EVOL also have other tricks up their sleeve to vary the content of the series and keep things interesting. Thus Right Nightmare features 20 locked groove, micro-sized remixes – 10 of each track per side – by Russell Haswell. The decision is an inspired move, Haswell’s input reduced to bursts and creating nasty, infinitely revolving rhythms; the polar opposite of EVOL’s trademark strings of sound.

This decision highlights another aspect of the release’s success. As with all EVOL and ALKU projects it is worth noting the presentation of the media, this particular release following previous instalments by being reproduced on coloured vinyl (hot pink 7” and ectoplasm green 12” having preceded). Right Nightmare is a fantastically vile Lemmings purple-and-green combo (wax and sticker, respectively), housed in a transparent PVC sleeve, the only identifiers of its content scratched neatly onto the record’s surface.

Although already an engaging object, through the addition of locked grooves Right Nightmare suddenly gains an entirely dual use as a performance tool, a different kind of record entirely. This suggests a total awareness of the vinyl format as an extension of their experiments, which stands the record out from simply being an example of solid aesthetics.

For all the praise, however, let’s answer those who, inevitably, say ‘but is it good music?’ This is as brutal a record as they come, a lateral experience of electronic body music through the discomfort it purposefully creates. But it’s also difficult to ‘rate’ music like EVOL’s, as it tends to set its own agenda through its own parameters. It is something the listener can attempt to embrace, but it is also fairly obvious that it doesn’t really matter if they don’t. Further to this, despite the extremity of their output EVOL’s sounds are never spiteful. Dramatic, yes; relentless, definitely; but only ever confrontational through a kind of grinning curiosity. The analogy to a bumblebee may therefore not be so daft after all.

Any aversion to this aside, Right Nightmare is a satisfying example of how imaginative work can still be made through referencing the past in new ways. Through operating conceptual ideas and references skilfully over different levels of interaction and consideration, EVOL and Haswell have created an original, multifaceted result.