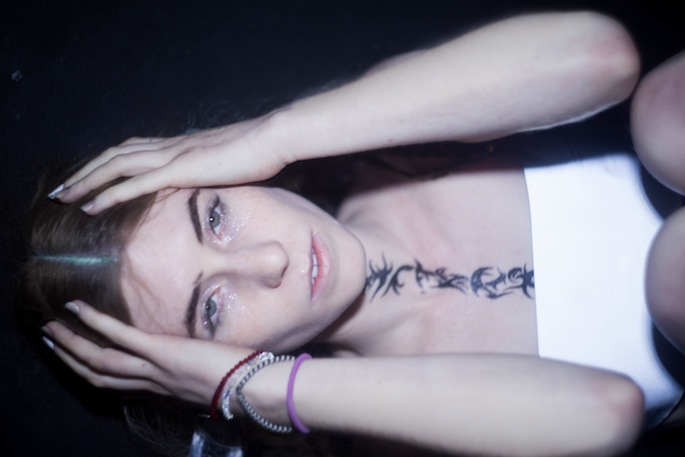 The producer/vocalist/visual artist has collaborated with underground favorites Physical Therapy and Gobby. Now she’s ready to go it alone.

When I spoke with Jamie Krasner, she was preparing for a trip from New York to Berlin, the en vogue destination for electronic music expatriates. For Krasner, the move is logical: after growing up in NYC suburb New Rochelle, attending famed art institute Rhode Island School of Design, and relocating to Brooklyn, it seems that it was only a matter of time before she ended up in Berlin alongside her friends and collaborators.

Krasner first appeared on our radar last year, her voice giving a soothing, human quality to Physical Therapy’s jungle-nodding ‘Drone On’. She also was part of synth-pop duo VANESSAS and she recently teamed with UNO NYC talent Gobby to co-produce SETH, a sample-driven, “frazzled pop” project on which she also sang. But while her collaborations have caught our attention, Krasner’s work cannot be limited to one side of an ampersand.

“I’m been making music forever, but I started out with guitar,” she says. “When I was in high school, I would lie about my age and play in bars.” Not beholden to the stereotype of the folksy female singer-songwriter, her music was influenced by jazz, Elliott Smith, Beck, and Nick Drake, all “kinda depressing,” she laughs. After high school, she attended RISD, meeting and befriending the Providence musicians behind that city’s experimental noise scene.

“Using my voice for every instrument is fun for me.”

In Providence, Krasner collaborated with a group of friends who would go on to found nascent techno label White Material Records (home to DJ Richard, Young Male, and Galcher Lustwerk), working with them on house, techno, and noise projects. Throughout, she was producing her own music, integrating the various projects and “collaging all the ideas together.” “Working by myself is like writing in a journal,” she says. “I have to get little things going and see which turn into songs.”

That process has resulted in James K’s Rum EP, her just-released debut solo effort (which you can stream below). Its four songs are somewhere between the pop songwriting of VANESSAS and the experimentation of SETH: off-kilter drums punctuate the seasick ‘Directions’, while her overdubbed vocals mingle with detuned synths on ‘Drunktrack’, a song reminiscent of early Zola Jesus.

A home producer, Krasner primarily uses Ableton to corral analog drum machines and synths, live piano and drums, and — the thread that ties it all together — her voice. “Basically every other sound is my voice through pedals and effects,” she explains. “Using my voice for every instrument is fun for me.”

“It’s a relationship, it’s intimate, of course; maybe it brings out a part of you that you didn’t see.”

While her solo work is her focus at the moment, Krasner still appreciates the “cool dynamic” of collaboration. “When you collaborate, you’re choosing what you like out of each person, and that’s the product,” she explains. “You always come out with something that is a fusion of the two, but it’s also what you think is the best of that person and what they think is the best of you, and it turns into this baby.” Furthering the “baby” analogy: “It’s a relationship, it’s intimate, of course; maybe it brings out a part of you that you didn’t see.”

That collaborative spirit has seen her influences come full circle: the video for SETH’s ‘Fish Oil’ was directed by veteran director Steve Hanft, who helmed Beck’s ‘What It’s Like’ and ‘Loser’, among others. “When I was a kid, I knew about [Hanft] because I was so into Beck,” says the self-described MTV obsessive. “I found out about him, and he’s a total influence of mine.” Krasner is set to work with Hanft, adding that “it’s crazy what we come up with.”

But while her visual art is influenced by artists like Beck, Hanft, and sources as varied as Godard films and Japanese anime, her major influences these days are her friends. “I’ve done the academic,” she says. “Now I’m trying to experience what immediately surrounds me.”