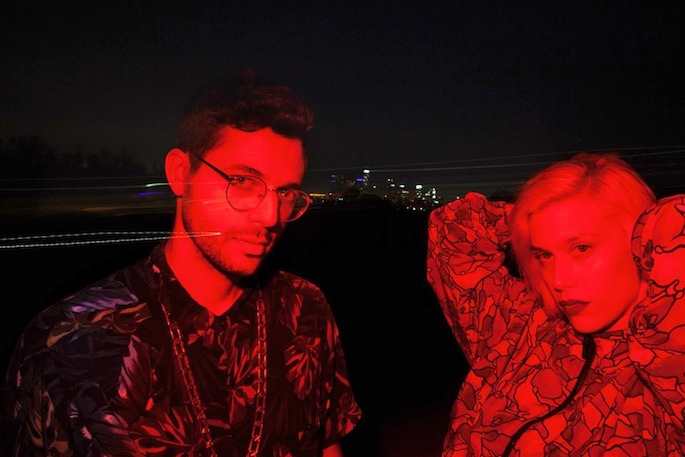 Let’s face it: while he might have spawned a raft of ice-cold R&B, The Weeknd is not for everyone.

Thankfully, there are plenty of artists working in a similar space, from Kelela’s guns-and-synths to Inc.’s quiet storm revival. With the release of their debut album, you’ll be able to add Skin Town to the list of artists pushing forward R&B with one eye in the rearview.

The duo, comprised of vocalist Grace Hall and Zola Jesus collaborator Nick Turco, came together late last year, and their album The Room is due out on October 28 via Time No Place. FACT spoke with the pair via Skype about 90s R&B, the continuing influence of 808s & Heartbreak, and covering Nickelback in a strip club.

How did you get together as a band?

GH: We met at a Vitaminwater uncapped event last year.

NT: It was The-Dream show.

GH: That’s where we both realized we liked R&B. I stalked him online a little bit and it turns out he’s an R&B guy who makes beats.

What projects did you have before this one?

GH: I was doing more punk and noisier stuff. I was playing in a Slits tribute band called The Slips. That’s how we got discovered and signed: one of the girls in the band heard my voice and was like, “you’re a really good singer, but I’m not sure about this style of music for you. Do you have any other projects?,” and said “I have this dark R&B project.” I was in a Crass tribute band, too; we did Penis Envy, start to finish.

Do you prefer tribute band or cover band?

GH: They were both cover bands, actually, because tribute is when you dress up like the person. Those guys are more serious.

“The 90s vibe is where we’re coming from in our hearts.”

Nick, other than touring as part of Zola Jesus’ band, what else had you done?

NT: I did this project called Rory Kane and I did Nika & Rory with Nika [Danilova] of Zola Jesus. I’ve been making R&B since 2008 when I first heard Kanye’s 808s & Heartbreak and Akon’s ‘I’m So Paid’, that whole album Freedom.

NT: 808s immediately appealed to me as soon as I heard it. I loved his sense of rhythm, his sense of melody, and the sounds he chose: the really cold digital feeling but also that warm emotional heart. That was really inspiring to me. Nika and I wanted to create some pop music like that, way back when we both lived in Madison, Wisconsin, having fun making tunes, and that’s how Nika & Rory came about.

GH: Rory Kane was this T-Pain, New Jack Swing project. That’s what I Googled and I was like, this is not the person I met at the show.

Was there R&B in your backgrounds before 808s?

GH: I grew up on it: SWV, En Vogue. I knew every word to every dirty song when I was 6.

NT: It’s always been my favorite. I’m a huge pop fan, especially the R&B side. Growing up in the 90s, listening to the radio and going to parties, that’s the soundtrack of my childhood.

Did your bandmates in those cover bands find it strange that you like pop music?

GH: No, they just didn’t know I have this voice. It wasn’t that I was shy, but that I had been told my whole life to be a singer. I felt pressured and I wasn’t able to do it for a while. I took a ten year break from singing, and it feels good to be doing it again. I didn’t know how I was going to come back to singing before I met Nick.

“Every era has a production style and it’s all about taking what you’re influenced by and moved by and updating it for the modern.”

What was the process for writing and recording The Room?

NT: It was real natural, we didn’t do anything unless it felt good.

GH: We started with a cover of Craig David’s ‘7 Days’ as a test. Synth-wise and vocally, we wanted a band that had that same feel. We wrote all the songs together. Some I wrote more of, some he wrote more of, but we always come together.

NT: We just tried to keep it simple and make the strongest songs that we could.

GH: Without doing too many takes or overworking the vocal melodies. Just keepin’ it fresh.

How would you describe your live performance?

GH: It’s like karaoke because we don’t have a band right now, but the production is so strong and the sound of the songs is so huge that it translates to any size venue.

NT: I do live synth, and obviously Grace sings the vocals, but that’s it.

Any plans to enlist a backing band?

GH: We don’t have any plans to do that! I think keeping it a two-piece is cool.

NT: When you bring in a band, you have different variations [of the music]. I experienced this with Zola Jesus, because I was there from when she first started playing to when she was playing across the globe. It was always a question, how do you interpret the songs, how much room do you give the different players? I love a live band feel, but we’re not ready for that yet.

GH: I don’t think it’ll ever work for our sound. But people always want to see a drummer.

NT: We could go for a live jazz band kind of thing. That’s what I love about live hip-hop sets when they expand the beat and it always ends up being super jazzy.

“We did a cover of Nickelback’s ‘How You Remind Me’ and [the strippers] really liked it.”

GH: I feel like we need a sound guy, a driver, a couple assistants, some background dancers. We have some choreography that is supposedly on the way. Right now I’m just on the ground, dancing all crazy, I don’t know what to do.

NT: The best was when we played Cheetah’s, this strip club in LA. Grace almost had her own background dancers when the strippers started doing a conga line.

GH: We did a cover of Nickelback’s ‘How You Remind Me’ and they really liked it. I always liked that song.

NT: I wasn’t a fan of the song, but it hit me: those chords are undeniable, the lyrics, the melody… it’s a well-written song.

What should people take away from the album?

How do you pay tribute to what you grew up with but still make it your own?

GH: I think the 90s comes through the most vocally. En Vogue, Missy Elliot, Tamia’s ‘So Into You’, Mariah Carey – that’s where I’m coming from. The music is the more modern part. But some of our songs, like ‘Hit Down’, sound more 90s, instrumentation-wise.

NT: From a pop point of view, every era has a production style and it’s all about taking what you’re influenced by and moved by and updating it for the modern.

As a name, “Skin Town” is visceral, sexual and a little gross; how’d you come up with it?

GH: My first name for the band was Claire’s, like the mall store, but Nick didn’t think it was funny or cool.

NT: If you don’t know the store, it makes no sense.

NT: I would recommend the Crazy Town performance on MTV’s Spring Break from 2000.

GH: The anti-fashion of 2000… Then, the second song that I came up with was White Town’s ‘Your Woman’. So it had to be something “town.” I picked the name because it didn’t feel like it matched the genre necessarily and it’s some weird, future shit. We just want to be different.