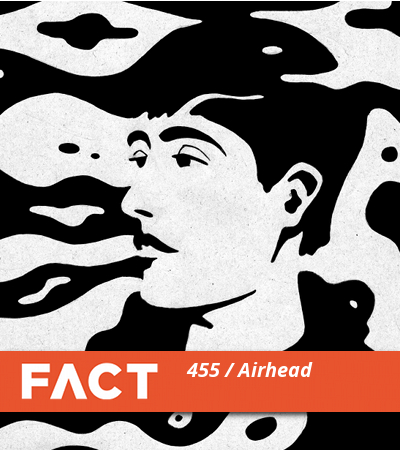 Rob McAndrews finds himself in the press a fair bit: he’s a regular collaborator with James Blake, performing as part of Blake’s live set-up and popping up on his BBC Radio 1 show. His debut single, 2010’s ‘Paper Street’, was also a collaboration with Blake.

However, as the years have gone by and the releases (an impressive six, including an album on R&S, For Years, and an aborted full-length on Brainmath) have rolled out, it’s become clear that Airhead’s an exceptional producer in his own right. He rarely plays it straight: there’s always something different about his tracks, be it a rhythmic element that beats out of time or a sample that threatens to – but never quite does – engulf the music whole, but with each release he gets closer to the centre of the dancefloor, and his latest 12″, on Untold’s Hemlock label, is simply a pair of brilliant, weird peaktime house bangers.

Like his music, Airhead’s FACT mix also gets pretty odd: it opens with a piece by electro-acoustic composer Richard Maxfield and continues with Arca and Daphne Oram, before Kassem Mosse and Bluntman Deejay drag it kicking and squealing towards the dancefloor. It never quite feels like it’s comfortable there, and Airhead’s not afraid to completely pull the floor out from under the listener, but once you’re in its world, you get the feeling that this is – as Untold might put it – rave music at its most fucked-up and fearless. No one ever said euphoria came easy.