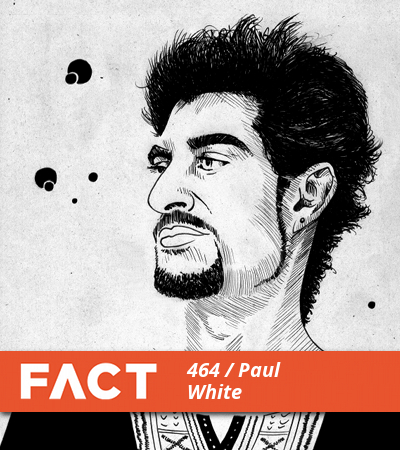 One of the underground’s most beloved diggers steps up on a mid-week FACT mix.

Paul White enjoys being in the background. For close to a decade he’s been releasing spellbinding hip-hop, electronica and more, mostly on the One-Handed label run by close friend Alex Chase, while also producing for Danny Brown – who called White his “favourite producer to work with”. He also puts in shifts as a library music producer, last year working on BBC2 programme L8er.

After a handful of albums on One-Handed, this year White struck up a relationship with veteran label R&S for the release of Shaker Notes. White’s most – ahem – musical album yet, it features live drums, bass, guitar and vocals, charting “the intoxication, heartbreak and ultimate triumph of a grand love affair.” We know: an electronic producer picking up the guitar is usually enough to make us pull a Tricky on their whole collection, but White’s music has always drawn as much from the Beatles as the Beatnuts, and it’s a move that makes perfect sense in his case.

FACT mix 464 not only adds context to Shaker Notes, it also feels representative of a slightly less grand love affair: the records that White just couldn’t live without. White might be a digger, but here he takes comfort in well-known records by Bjork, Aphex Twin, Boards of Canada, The Flaming Lips and more, while scattering in pieces of his own material and, inevitably, Gong (for more on that, discover White’s 12 favourite records from the mind of Daevid Allen).

We wouldn’t quite call it no surprises, but it’s a timely reminder that sometimes, established records are well-known for a reason.