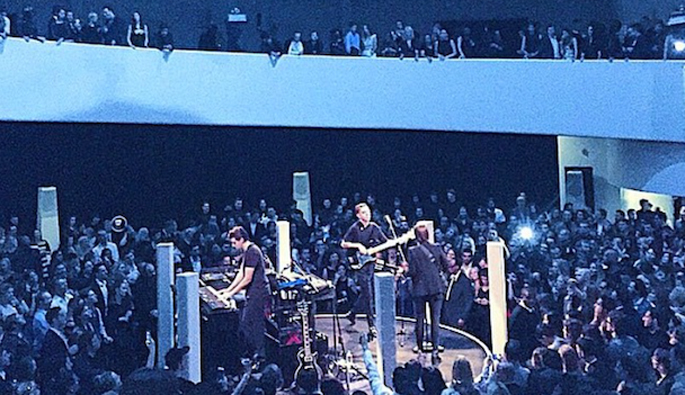 The xx played a pre-party at the Guggenheim ahead of the museum’s International Gala weekend.

The Dior-hosted event saw the band performing in front of a crowd that included Marion Cotillard, Raf Simons and A$AP Rocky. The xx performed beneath a large, illuminated globe created by the late German artist Otto Piene.

The band also reportedly premiered some forthcoming material at the event however footage of those tracks has not yet surfaced. You can watch the band perform their hits ‘Islands’, ‘Crystalised’ and ‘Angels’ below.

The xx also sent out a newsletter update on their highly-anticipated third album earlier today. The group have been recording the album in Texas, Iceland and London. You can read that below as well. [via Stereogum]

It’s been a while, we hope everything is wonderful with you.

This year has been a creative one for us so far, we have been hard at work writing and recording new music in a few different places around the world.

In the spring we spent a few weeks in the incredible and unique town of Marfa in Texas. Then, in Summer we spent some time just outside of Reykavik in Iceland. This Autumn we have been back in London, writing and having some time at home but this week we are heading out to Los Angeles to continue the writing and recording process.

Although all very different, each of these places have been inspirational environments to create music in, and each will have an influence on the new album. The whole process is a big adventure and we can’t wait for a time when we’ll be able to share the music with you.

Lots of love until then.