Lists I By Francis Englehardt and Paul NickersonI 11.02.15 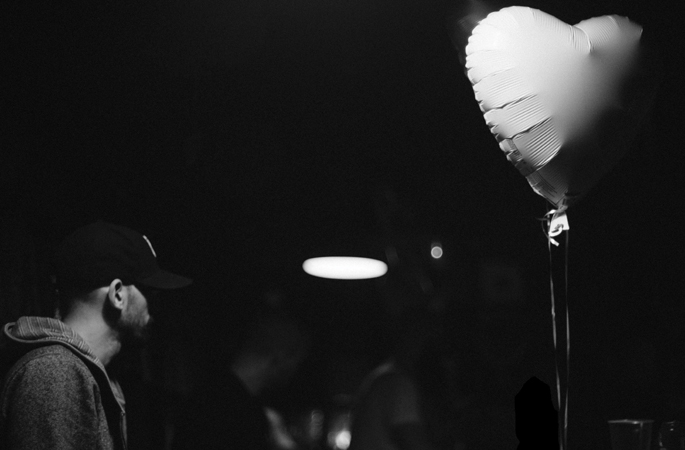 Every month, Slow to Speak round up the best new 12″s around – or at least, that’s the plan. In case you haven’t noticed, these dudes march to the beat of their own drum – so stuff from other years and genres invariably features alongside newer club-ready material.

If you’re looking for a romantic night out on Friday, then make sure you drag your dancing feet over to Good Room in Brooklyn, where Francis Englehardt and Paul Nickerson will be playing the good stuff all night, just in time for Valentine’s day. Tickets can be snagged here.

Nickerson and Englehardt have even been kind enough to piece together another exclusive mix for the occasion, which you can stream below.

The ultimate Valentine’s mix! I remember sitting for an entire summer in the Boston Common during my lunch break and playing it over and over. I was 17 and fascinated by all these tracks and the way he played them. I wasn’t really familiar with any of them but knew all the hip-hop jams that had bastardized them. I had no idea who 7L was, but in my head he was this larger-than-life figure with a massive library of music and encyclopedic knowledge of soul and funk jams. I remember listening to ‘Over Like A Fat Rat’ again and again, blown away by the way he cut it up, imagining going to clubs where they played music like this.

This was a time before the internet and if you didn’t grow up in NYC, where these tracks were blasting on the radio all day long, you didn’t hear them. WBCN and WZLX sure as hell weren’t playing Kleer’s ‘Intimate Connection’ and house clubs in Boston would only play the three standard disco records at the end of the night – Lonnie Liston Smith’s ‘Expansions’, George Kranz’s ‘Din Daa Daa’ and MFSB’s ‘Love Is The Message’. Music was shared through mixtapes and this tape was a real fucking lesson in the music we would come to play and promote full time.

I didn’t meet 7L until years later and it turns out that he did have a massive library of music and was still a killer DJ; on top of that, he was one of the coolest guys around. I don’t think I ever told him how important this mix was to me and he’s too humble to accept praise anyways, but I’ll give it a shot here just in case he reads this – George, THANK YOU, THANK YOU, THANK YOU! This shit changed my life!

The Urban Motion Project
’12” Of Love’

Magnificent American-made deep house vocal from 1994 on the aptly named Deep Crap Records, with a song title whose double entendre sums up both the mood of the jam and the sleaziness of the scene at the time. It’s still cheap on Discogs – hurry though: Jeremy Underground Paris has his finger on the ‘Buy Vinyl’ button as we speak! It’s perfectly boring enough to be included on the next My Love Is Underground compilation.

A delicious Pal Joey dub indeed, right up there with ‘Jump & Prance’, ‘Party Time’ and ‘Love’s Gonna Getcha’. In Boston, this was a hard one to find. His remix of ‘How Do You Say… Love’ was only on the ‘Power Of Love’ promo 12”, which confusingly came in the same picture sleeve as many of the other versions of that single. I searched for so long and bought so many different copies of ‘Power Of Love’ ’til I finally found the right one. And when I got home and put it on, it sounded even better than I remembered.

There is something magical about Deee-Lite being reworked by good ole Joey Longo. His remix of ‘Good Beat’ is perfect, and I’m not entirely convinced he had nothing to do with the B-side classic ‘Riding On Through’. Straight Alchemy.

They took the Gloria Jones classic, famously covered by Soft Cell, and achieved what neither of those two artists did – making the right music to match the lyrics.

There is something about songs named after women that always brings about special results – Hall & Oates’ ‘Sara Smile’, Siouxsie & The Banshees’ ‘Christine’ and The Beatles’ ‘Michelle’ are all magic moments, but I think ‘Angie’ eclipses them all. And the story behind it is as good as it gets.

‘Angie’ was written by Mick Jagger and Keith Richards, and neither will admit to the real origins of the song. Richards claims ‘Angie’ is a pseudonym for heroin, which he was trying to kick at the time, but it has long been speculated that ‘Angie’ is actually a reference to David Bowie’s first wife Angela. According to her, after returning home from a trip, she walked into her bedroom to find Bowie and Jagger in bed together. Jagger denies her story, but what else could’ve inspired him to write a song about the haunting, sad eyes of a girl named Angie?

Judge for yourself. Either way, there is no doubt that the piano work of Nicky Hopkins on this song is some of the most heartbreaking ever played.

One of those songs that, whenever it comes on the radio, you crank the volume up to 11! Without love, where would you be now?

One of the most unforgettable house vocals ever written and arguably DJ Duke’s best production. I think I’ve heard it a million times and to this day I still get chills down my back when I hear the keys. DJ Duke is one of house music’s most underrated producers, and this record is easily on par with any of MK’s best works.

Speaking of MK, I had to get this remix of his on the list. It’s not often that a great producer of the past can still make dope records. I could’ve easily written about an MK classic like ‘Burning’ or ‘Love Changes’, but this is a new record! There are so few great house vocals coming out these days, so this one is extra special. MK manages to take this song and totally flip it. I don’t know how many times I’ve tried to figure out the lyrics, but fortunately the ones that matter seem to be about love, so the track qualifies.

Man, the lead vocal on this song destroys me. There is just something about the way she swings her voice that makes me melt. Classic ’80s R&B at its best.

Lenny Williams
‘You Got Me Running’

A couple of years ago, a good friend of ours passed away on Valentine’s Day. One of the last records he was looking for ‘You Got Me Running’, so this one is for him.