We’re told on a regular basis that pressing plants are at breaking point, but you wouldn’t think it given the sheer volume of house and techno 12”s being pressed each month. The number alone makes it difficult enough, but the proliferation of watered-down deep house and identikit techno tools doesn’t make staying on top of things any easier, and that’s before you consider the digital-only music, mixes and live streams we now have to choose from.

With this in mind, Scott Wilson takes over FACT’s house and techno column to highlight the best and most interesting music in the form of 12”s, EPs, remixes, albums and mixes. With the club environment splintering off into different directions, it’s easy to forget that there’s just as much innovation in the house and techno scenes worth noting. Of course sometimes a track’s just a banger, and there will be plenty of that too.

It couldn’t have gone unnoticed that the house and techno communities have been in crisis. Ten Walls, Boddika, Tanner Ross and now the Berceuse Heroique label have been rightfully called out for homophobia, racism and sexism, leading to a lot of discussion about discrimination and the creation of safe spaces in the club. It’s been unpleasant to witness such attitudes bubbling to the surface in the short term, but it’s the best thing that could have happened in the long term. Discussions are starting to happen about things that should have happened a long time ago, not just involving bigotry and sexism, but about what kind of imagery is appropriate to use when you’re selling a techno 12″.

Given the year’s events, techno could use more figures like Joseph Seaton. As The Thin Air’s Aidan Hanratty has pointed out, Seaton still holds to the early rave ideals of inclusivity and community. It’s probably not a coincidence that the name of his blissful new single for Houndstooth is drawing attention to one of the worst humanitarian crises the European community has had to deal with. While other producers make comments that attempt to divide, Seaton’s message sadly feels all too rare. 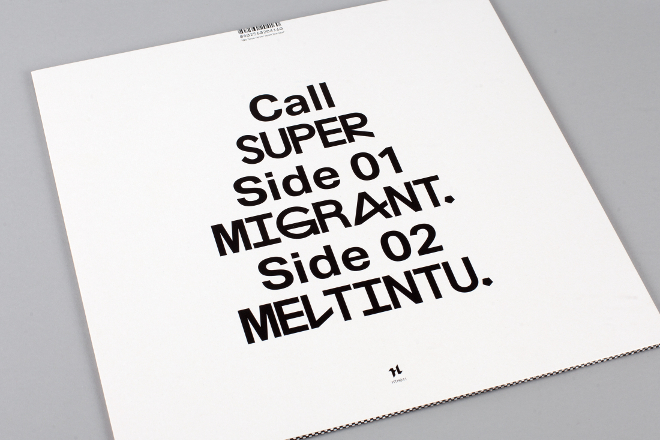 It helps that ‘Migrant’ and B-side ‘Meltintu’ are also two of the deepest, most colourful things Seaton’s produced as Call Super, with the latter flecked with the sort of detail that brings Oni Ayhun to mind. Seaton gets better with each record, and he shows no signs of stopping.

Listening to the music of N1L is at times like staring into a vast, bleak expanse where time moves at a different rate to the rest of the world. It’s probably why he’s the first artists to appear on Lee Gamble’s new label UIQ; like Gamble’s recent Koch album, N1L’s music feels stretched and compressed in equal measure, combining a nostalgic traces of 90s techno, jungle and rave into something that sounds like it’s been torn from another era and warped in the process. The title of the record is Wrong Headspace, but Crushed Headspace might be more apt; at times N1L’s take on techno exerts so much pressure on your brain it feels like you might be a make-up effect in Scanners.

It’s unlikely that anyone is flying the flag for optimistic techno futurism quite like Tadd Mullinix and D’Marc Cantu at the moment. The Ann Arbor pair have been making music together as 2AM/FM for 10 years, but this debut album for Mullinix’s Bopside label is the project’s crowning achievement. The pieces will be familiar to anyone who’s heard a Detroit techno record made in the past decade, but the pair arrange them in a way that feels like you’re hearing the genre with fresh ears. There’s no better example of this than ‘Excuse Me Miss’, an acid vocal number that sounds like a 16-bit version of a vintage Trax 12”. This album is as deep as they come, but the duo don’t forget to have fun while they’re at it.

Schmorgasbord isn’t the most prolific of labels, but it’s quietly put out some of the Bristol area’s most unusual techno records of the past four years. Each 12” sees two producers take on each other’s tracks, and this release is the best yet: Bristol veteran Peverelist up against Freerotation co-founder and modular techno wizard Steevio. It makes a lot of sense as a pairing; for more than a decade they have been developing a fluid style of techno in parallel, and to see them meet feels like something that should have happened years ago. Pev reins in some of Steevio’s modular excesses on ‘Seren,’ and Steevio brings a little looseness to Pev’s ‘Edges’; if you saw the latter on Livity Sound in the future it wouldn’t seem at all out of place.

‘Face A’ is probably the most uncomfortable techno record I’ve heard this year. Like much of last year’s Blues Dances tape for UK label Where To Now?, the influence of dub techno is hard to miss on Beatrice Dillon’s latest, but here the chords cut through the mix like an ice pick puncturing your eardrum alongside blurts of no wave saxophone. Though the mix of frequencies inspires a kind of nails-on-blackboard sensation in my own brain, I haven’t been able to get enough of it; like Dillon’s DJ sets it marries more offbeat sounds with a beat that’s just about stable enough to dance to. ‘Face B’ is more of a dub version that tones down some of its wilder inclinations, but it feels almost vanilla in comparison to the lead track, which is undoubtedly one of the year’s highlights.

The Black Madonna’s remix of Nick Höppner’s ‘Relate’ is a masterclass in how to make a track a bit rougher without losing the emotion of the original. The rolling granite kick reminds me a lot of the jackhammer groove of Doug Lee and Ron Morelli’s 2012 track ‘Real Bad News’, but where that collapsed in on itself in a synth freak-out, this remix hits a euphoric crescendo that’s almost like a more laidback take on one of Thomas Bangalter’s Roule classics. Given The Black Madonna’s Chicago heritage, it’s not overly indebted to the city’s classic sound – it’s just a banger, plain and simple.

A lot of people were surprised that DJ Richard should be releasing his debut album on Dial, and for good reason. On White Material he released tracks like ‘Leech2’ and ‘Nailed To The Floor’, ghetto house-inspired productions that had little to do with Dial’s delicate, umber sound. I’m not sure whether DJ Richard consciously set out to make a “Dial” album or not, but Grind is probably my favourite record on the label since John Roberts’ brilliant Glass Eights, balancing irradiated ambient tracks like ‘Waiting For the Green Flash’ with yearning club tracks like ‘Vampire Dub’. DJ Richard might have lost some of the energy that made those White Material 12”s so exciting, but what he’s created on Grind feels like something much less ephemeral.

There’s very little to go on with regard to vinyl-only label The Lauren Bacall. It’s distributed by Brooklyn store Halcyon, and it enjoys using the imagery and names of classic Hollywood to evoke a different kind of mystique than your average hand-stamped operation. It’s the kind of thing that would usually turn me off, but the music is so solid it’s hard to ignore, and this LP from label regular Grant is the ideal entry point. Like Frank & Tony and Galcher Lustwerk, Grant distills the essence of deep house into something that puts a fresh spin on a vintage feel. It’s deep house that’s content to settle into a sumptuous groove and let it play out to the end, but it’s also got a sound that’s more homespun than consciously lo-fi.

William Burnett might release a lot of records, but for the most part they’re always different. On one release he’ll create a 90s-inspired track on UTTU, on another he’ll make weird acid for The Trilogy Tapes. This lack of consistency is probably his biggest asset; while you more or less know what you’re getting with a Legowelt record, Burnett’s always full of surprises. This record for Jordan Czamanski’s Off Minor is one of his most experimental yet, contrasting an amorphous melodic track that could almost pass for early Autechre with an unrelenting banger that sounds as if a pneumatic drill’s been let loose on a battered old piano.

Russell Haswell
As Sure As Night Follows Day LP
Diagonal

Though he’s known ostensibly as a noise artist, Russell Haswell has been hovering at the fringes of the techno world for years. He’s collaborated with Regis as Concrete Fence, but it wasn’t until he connected Powell’s Diagonal label that he released a solo record that engaged with the dancefloor, last year’s 37 Minute Workout. It’s clear, however, that his follow-up album for Diagonal is the real club record, a collection of tracks that channel his formative raving experiences and appreciation for Drexciya, Jeff Mills and Robert Hood. The high point is ‘HARDWAX FLASHBACK’, three minutes of grinding modular waveforms and granite kicks that are guaranteed to provide you with a wide grin. To be honest, much of the album is still as undanceable as Haswell’s vast back catalogue, but that’s not really the point – there’s more true techno spirit coursing through this LP than most of the identikit industrial 12”s filling the racks.

Page 1 of 11
Tags: The month in house and techno