Nightmare Before Christmas returns this December with the art provocateurs at the helm.

After a turbulent few years, All Tomorrow’s Parties has announced a return to its classic holiday camp format in 2015. Controversy-stirring siblings Jake & Dinos Chapman will return to curate the Nightmare Before Christmas weekender at Prestatyn Pontins, bringing the likes of laptop manipulator Holly Herndon, Detroit punks Death, psych-rockers Loop and Fuck Buttons offshoot Blanck Mass to the North Wales coast from November 27-30.

Following ATP’s Don’t Look Back thread, Max Richter will perform his album The Blue Notebooks in full, The Notwist will do Neon Golden and The Album Leaf will return to In A Safe Place.

Ought, Iceage, Fumaça Preta, Andrew Hung, Sculpture, Younghusband, Vision Fortune and Grimm Grimm are also on the bill, and naturally there’s an audiovisual performance from Dinos Chapman, who released his album Luftbobler in 2013.

“We are so honoured to have been asked to curate ATP again this November in Prestatyn. Ten years ago we curated the first Nightmare Before Xmas and lost so many brain cells that it’s taken a decade to replace them. It is extremely special for us be involved again,” said Jake Chapman.

“The redux of ATP is something that so many of our fans have wanted and we are really thrilled to be returning to a new location with Jake and Dinos Chapman, who were the first ever Nightmare Before Xmas curators, so many moons ago,” added ATP boss Barry Hogan.

Prestatyn Pontins has “two large-capacity stages, both boasting multiple-tiered seated areas to assist with visibility,” according to ATP, plus an indoor swimming pool, football pitch, basketball and tennis courts, crazy golf, go-kars, air hockey and a large arcade games area. For the first time, the festival is offering family accommodation deals and a special programme of children’s cinema and entertainment. Early bird tickets go on sale this Friday, March 20.

The last holiday camp took place in December 2013, but ATP has since branched out northwards with an annual festival in Iceland. Last year ATP came under fire for cancelling its two-day Jabberwocky Festival in London with only a few days’ notice. 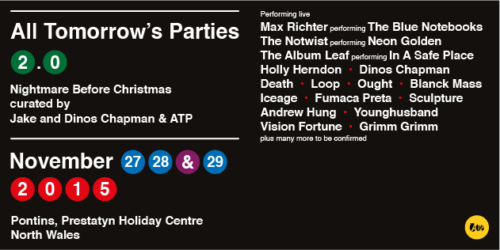