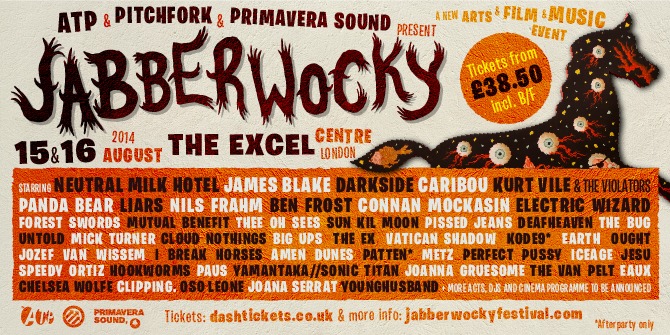 ATP has cancelled the inaugural Jabberwocky Festival, which was due to take place this weekend at London’s ExCel Centre.

ATP boss Barry Hogan apologised to fans in a statement on the company’s website, saying: “We have put everything into promoting Jabberwocky, and despite healthy ticket sales; all our efforts could not take those sales to the point that we needed to finally stage the event.”

He continued: “In the past ATP has weathered losses such as this and gone on with the show, taking huge direct financial blows as an independent company. But on this occasion, with an event of this scale and the high production costs that come with it – if we had gone ahead; it would have 100% been the end of ATP.”

Neutral Milk Hotel, James Blake, Darkside and Caribou were among the acts due to perform at the festival, which was billed as a replacement of sorts to ATP’s holiday camps, the last of which took place last year.

Hogan added that refunds would be available at point of purchase.

Update: Music fan Adam Nodwell is attempting to stage an event (or a series of events) in Jabberwocky’s stead, hoovering up the artists and finding new venues for them to perform in. Head over to his Facebook page to find out more and checkout the Jabberwocky Fallout blog.

Confirmed gigs include Neutral Milk Hotel at The Forum this Friday and Ben Frost and Forest Swords at Corsica Studios. On Saturday, Earth and Pissed Jeans will play Birthdays (sold out) while Kurt Vile and the Violators and Nils Frahm are at Village Underground.

Update 2: Promotion company The Zeitgeist Agency have issued a statement saying that the company behind ATP – Willwal Ltd – has not paid them “for several months”, and have revealed to them in writing that they used money that should have been going to Zeitgeist to instead secure venues and artists. This is all indicative of a massive cashflow problem (which would certainly explain the cancellation), and Zeitgeist have announced that they took legal action against Willwal on July 20, to no response. It also explains why rumours were flying around as early as a month ago that Jabberwocky would indeed be cancelled.

Update 13/08: Dash Tickets have issued a statement expressing their disappointment at the cancellation, adding that their “trust in ATP seems to have been misplaced”. “We feel compelled to make it clear that Dash has given to ATP all funds that Dash received for ticket sales to Jabberwocky. In addition to giving ATP all the ticketing funds, Dash has made substantial advances to ATP which remain unpaid, as do considerable fees for the work we have undertaken on their behalf.

They add: “It is important that everyone knows that Dash Tickets is in no way responsible for ATPs financial problems, nor with their conduct post cancellation. We are very keen to learn where the money has gone!” This seems slightly misleading, as Dash is the point of purchase and therefore should be responsible for refunds.

Update 2 13/08: ATP have issued another statement on refunds, asserting that Dash Tickets are indeed responsible for refunds:

“For the vast majority of people, Dash Tickets will be their point of purchase. It is their responsibility to refund the customer, as they were the company that took payments; not ATP. And if Dash are not being helpful facilitating this matter, your next point of contact should be directly with your bank or card provider to order a chargeback of your purchase amount.”

Ticketholders who booked through another agent can email feedback@atpfestival.com with any questions they might have.

Update 15/08: ATP have hit back at “vindictive” claims against them in a new statement, saying they are “NOT trying to pass the buck”. “Any funds we did receive from Dash are tied up in the cancelled event and we too have lost considerable amounts of money,” they state.

The company also state that they terminated their deal with PR firm Zeitgest “for doing a disappointingly substandard job on the Jabberwocky press campaign” and are now in a legal dispute over the amount owed. “When we dismissed them, they also started circulating rumours that Jabberwocky was in trouble, which of course did not help with advance sales and unfortunately, became a self-fulfilling prophecy,” they add. Read the full update for more information on refunds.

It is with deep sadness we regret to inform everyone that as of today Tuesday 12th August 2014, ATP is being forced into cancelling this weekend’s Jabberwocky festival. Refunds will be available to all customers at the point of purchase.

We have put everything into promoting Jabberwocky, and despite healthy ticket sales; all our efforts could not take those sales to the point that we needed to finally stage the event. Over the past month and all the way up until this moment we have tried every possible course of action to follow through in delivering Jabberwocky to you, but the position we unfortunately find ourselves in as a result of a succession of events that have lost money in an increasingly aggressive festival market, means we are no longer able to do so.

In the past ATP has weathered losses such as this and gone on with the show, taking huge direct financial blows as an independent company. But on this occasion, with an event of this scale and the high production costs that come with it – if we had gone ahead; it would have 100% been the end of ATP. We do not take this decision lightly and it was the hardest we’ve ever had to make.

All other ATP Presents shows will go ahead as planned, including ATP Iceland with our local partners there in 2015.

We apologise to all the people we have let down from fans to the bands, the venue and all the suppliers. We have tried everything in our power to save this event and continue, but the losses we have recently incurred have unfortunately been too much for a company of our size to bear.