Featured Stories I By Chris Kelly and John TwellsI 30.04.15 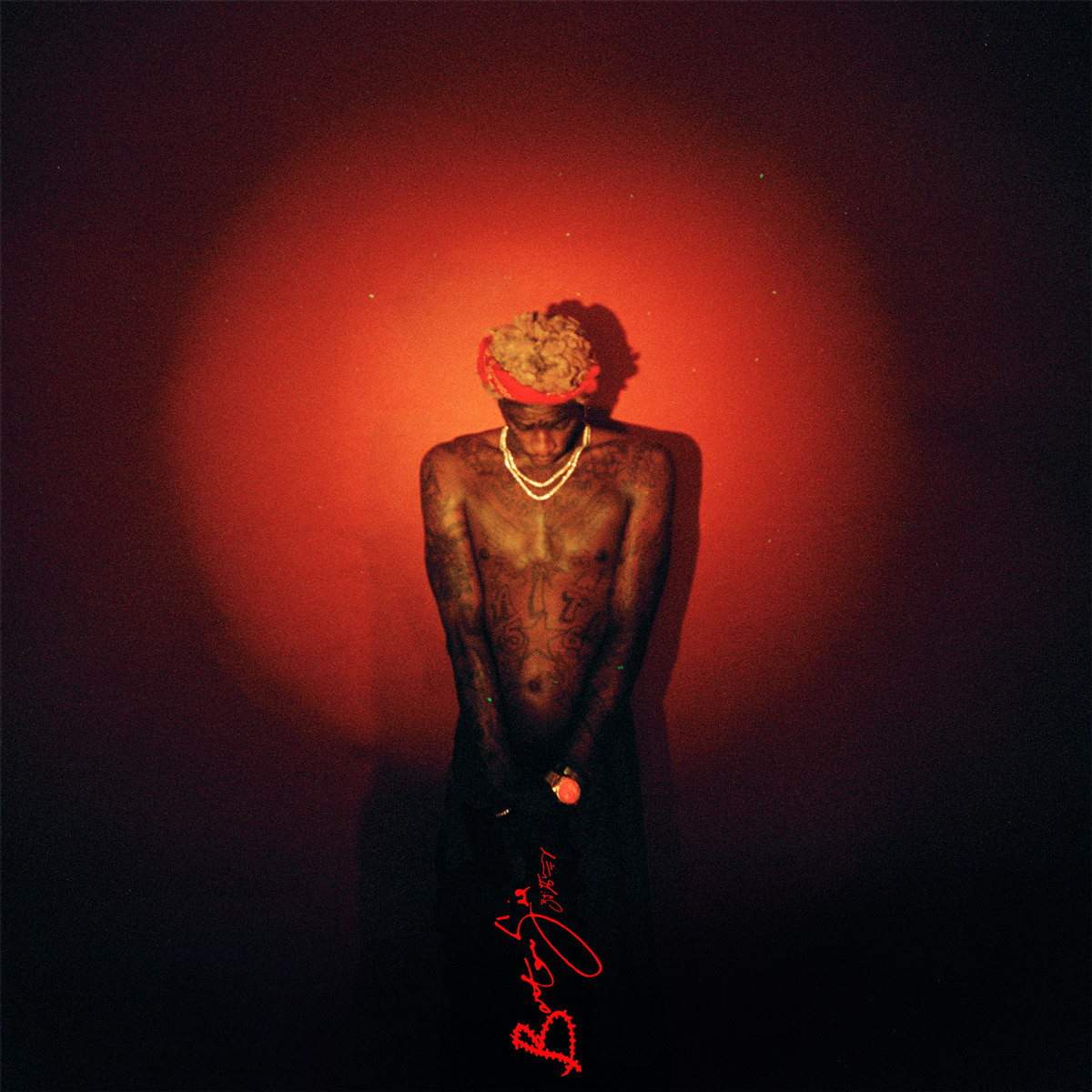 Young Thug hasn’t released a (legit) solo project since 1017 Thug, which seems like a lifetime ago: before ‘Stoner’ and ‘Danny Glover’, before Black Portland and Rich Gang, before he went from Lil Wayne’s biggest fan to a thorn in his idol’s side. But despite its title, Barter 6 isn’t really focused on the latter, apart from a few oblique shots (“Pussy boy I’ll leave you dead and call it dedication”). Rather, it’s a chance for Thugger to assert the latest version of himself.

“But really what is it to do,” he ponders on the lead track, “when the whole world constantly hatin’ on you?” The answer, apparently, is to show restraint and confidence. He changes his flow — from leaned out to rat-a-tat rapping to full-throated wailing — from song to song, verse to verse, even line to line. There’s a playful streak throughout, with his fanboy namedrops, “nerdy nerdy” and “dork” ad-libs and punchlines both childish (“She runnin’ away from my weed like it farted”) and outlandish (“Beyoncé bitch, I’m a bumblebee”). He’s also as self-aware as ever, bragging “every time I dress myself it go motherfuckin’ viral,” and taking a break from trolling to confirm: “No, I’m not gay, I fuck bitches on bitches.”

There’s nothing as immediate as ‘Lifestyle’ or his recent collabs with Metro Boomin; London on da Track and Wheezy offer an album full of muted trap lullabies, all ping-ponging synths and melancholy piano melodies. The beats on Barter 6 wash over you like a springtime stream rather than crashing into you like a summery wave, which suits Thug’s often lethargic, Xan’d out delivery.

In fact, there are times when the drugs seem to be getting to him (“I think I’m OD’ing on drugs,” “Geeked out my mind, man I’m tripping out, I don’t know none of these people,” the joyless hook of ‘Halftime’), but he can still go in: on ‘Just Might Be’, he lets a hook tumble forth and steps back on the interlude, evaluating himself and Barter 6: “That’s called breathin’, that’s how you let that bitch breathe, fool.”

For the most part, Rich Homie Quan has spent the last few years in second position to Young Thug; it took Rich Gang: Tha Tour for most people to realize that Quan is operating on an equally groundbreaking level, albeit with a different skillset than Thugger. Quan continues to bleed emotion whenver he’s on the mic, singing his melodies and harmonies with an often palpable pain in his heart. Those melodies (like on ‘Throw It Back’) and harmonies (like on ‘Eye’) are on full display on If You Ever, as are increasingly impressive pop chops (‘Take My Hand’, ‘Doing It’) and vivid imagery (“I got this shotgun you think it’s a dozen roses,” on ‘I Been’).

At 20 tracks long and heavy on DJ Drops, If You Ever Think is definitely a mixtape (and hopefully the last one that uses this increasingly-ridiculous naming convention). ‘Beside Yourself’ and ‘Worried Bout Shit’ bang but don’t break new ground, while ‘Now I Know’ and ‘Sorry’ don’t make full use of samples of Stephen Marley and Bobby Womack. It says a lot that the best songs here — ‘Flex’, a neon, sing-along summer anthem in the ‘Type of Way’ mold and ‘Daddy’, his painful recounting of his father’s nearly-fatal shooting — have been out for months. Still, we wouldn’t be surprised if Quan has a huge summer — just ask him.

Last year’s gravelly Life of a Hot Boy was a late highlight in the Atlanta’s 2014 run, and helped establish Bankroll Fresh as a genuine concern, a rapper who had more to offer than just one anthemic track. Its sequel, Life of a Hot Boy 2 (Real Trapper) is even better: Bankroll sounds more assured in his role, and while the tape rarely deviates from the accepted ATL standard, it does what it does so convincingly it’s hard to criticize.

Production across the board is high quality, handled mostly by local vet D Rich who incidentally was responsible for Hot Boy’s best tracks. By connecting with Southern rap’s past (echoes of No Limit’s glory days are audible throughout the tape), D Rich and Bankroll Fresh have arrived on a sound that’s urgent, current and effortlessly enjoyable. Surely he can’t be too far from breaking out.

While the entire Awful Records roster walks the line between sinister and seductive, KeithCharles Spacebar might just do it best. That dichotomy defines We’re All A Little Triflin, his first album since 2011’s miles-away BeforeCommonEra. Take the title track, for example: there’s that menacing beat, a sing-song hook and lyrical raunch-outs like “I all I want / give me throat / trachea soon as I’m waking up / I don’t call back ’cause I’m fake as fuck / tongue tied up in the labia.” Vivid! (Don’t worry, he’s still sex positive: “she ain’t even nut / this n*gga rude as fuck,” he admonishes.)

But KeithCharles also knows that you can’t go 100 all the time: across the album, he toys with negative space and ambience in a way that makes in-your-face lyrics and knockout productions stand out in relief, like his pleadings on the gorgeous ‘Stacy’. Plus, he’s able to nod to N.E.R.D., NoLA bounce and So So Def without falling into pastiche.

Guest spots are carefully chosen, both from within and without Awful. As she did on Father’s album, Abra steals the show on ‘All My Luv’; similarly, RichPoSlim goes off on ‘Always 1’. And by the time he duets with newcomer Indigo Tshai on the gauzy ‘The Come Down’, it’s clear that — no matter how triflin’ — everybody’s got feelings, too.

Memphis’s Lil Lody has settled into a pattern: he releases tape after tape (The Theory 2 and Da Street Bible were both excellent, check ‘em out) to a deafening silence that makes no sense at all. The guy penned Young Scooter’s ‘Colombia’ for fuck’s sake. This latest tape is equally good, and while the rapper/producer doesn’t contribute any beats of his own, the quality throughout is typically high, accenting Lody’s debt to Memphis royalty (‘Str8 Cash Shawty’ is a Triple 6 tribute in all but name).

Da Position of Doubt probably won’t do anything to aid Lody’s status, but we live in hope. Just listen to how he manages to transform a trance-y post-dubstep beat from Vega Beatz on ‘See You Win’ (itself a flip of Phaeleh’s ‘Afterglow’) into a trunk rattler that wouldn’t sound out of place on a Kevin Gates or Young L tape. Stop sleeping on Lody.

As a co-founder of Fool’s Gold, Nick Catchdubs has been mixing hip-hop and dance music since before that type of cross-pollination was de rigueur, releasing early singles by Kid Sister and Kid Cudi to key albums by Danny Brown and Run the Jewels. On his debut album, Catchdubs continues the movement he helped start, offering his own club-ready takes on the sounds and scenes of New York, the Bay and beyond.

Catchdubs fuses rubbery basslines, crystalline synths and samples, and block-rocking beats with vocals from a host of (mostly) underground rappers, getting us to care about some guys we wouldn’t have otherwise (sorry Troy Ave) and reminding why we didn’t like others in the first place (not sorry Heems).

Beyond the brash beats that wouldn’t be out of place on a Run the Jewels record, Catchdubs dips into his wide-ranging palette on the drum-rolling ‘Drop’, the bouncey ‘Heartbeat Jeep’ and the synth-pop meets turntablism tune ‘Run’. And, like the DJ’s-DJ that he is, there are a handful of warped interludes and instrumentals to help build the energy. The album is a 12-track party-starter, just add a Smoke Machine.

When an eight-track EP is only an 18 MB download, it’s usually cause to worry. Not that quality is everything, but it’s not 1997 – our internet connections can take it, c’mon, hit us with a crunchy 160kbps MP3 at the very least. Thankfully, even through the fog of lossy encoding, OGZay is still worth a listen. It’s not quite as essential as Future’s sizzling Zaytoven-produced Beast Mode or Maco’s surprising, gloomy 15 but the two clearly have chemistry.

Opener ‘OG Mac’ highlights Maco’s undeniable charisma while Zaytoven works in his usual mode, with rinky-dink piano underpinning a slovenly, bass-heavy beat. This sets the scene well – there’s canned piano lavished all over OGZay, and it threatens to derail the tape. It’s noticeable when these elements drift into the ether and Maco is quickly given the space to capitalize on the darkness that took 15 over the edge. ‘Live From the 3’ is the clear highlight: Maco’s humor and weirdness sits center stage as Zay’s beat rumbles in the ether, woozily heaving in-and-out of focus.

Chicago’s own Sasha Go Hard returns with a sequel to 2013’s Nutty World, a tape that shows what she does best: boss bitch anthems with lyrical dexterity, a fierce attitude and bell-ringing beats (that often dabble in horror score synths, like ‘Purge’ and ‘All I See’). It’s a script that she knows inside out, and ‘Vision’, ‘Threat’ and ‘No Money’ certainly live up to her nickname.

But Sasha is best when she tweaks to script enough to make a personal statement that goes beyond street rap tropes. She asserts her independence (and capably sings the hook) on ‘Don’t Fall In Love’, and touches similar notes on ‘Niggas Ain’t Shit’, a bit of storytelling about down-and-dirty men. The dance-rap ‘Today’ is a nice diversion, which she could stand to do more of. But if she’s not going to mix it up, she should stick to songs like ‘Bricks’, her sexually-charged 2014 single that nods to Nicki Minaj both directly (“never fucked Keef, never fucked Fredo”) and indirectly (“make him get down and eat me ‘til I come”): it’s powerful, personal and bullshit-free.