It’s become a tradition that the last page of this column is reserved for a release that, while not strictly “the best on Bandcamp” on musical or artistic merit, needs to be heard for its sheer “how did this get made?” quality. I mention this because a recently released record credited to Sun Kil Moon was a lock for that spot this month, but has since been removed from the site. It was simply too good for this world, but you’ll find it on YouTube now and a deserving substitute in its place.

The extra laugh is to make up for the seriously grim selection this month: dense psychedelic noise, diaristic existential crises, and a previously ambient producer creating musical nightmares. Heaviest of all is the Release Of The Month — a record that’s devastating in its honesty, and also one of the best albums of the year. Learn more about it after the jump. 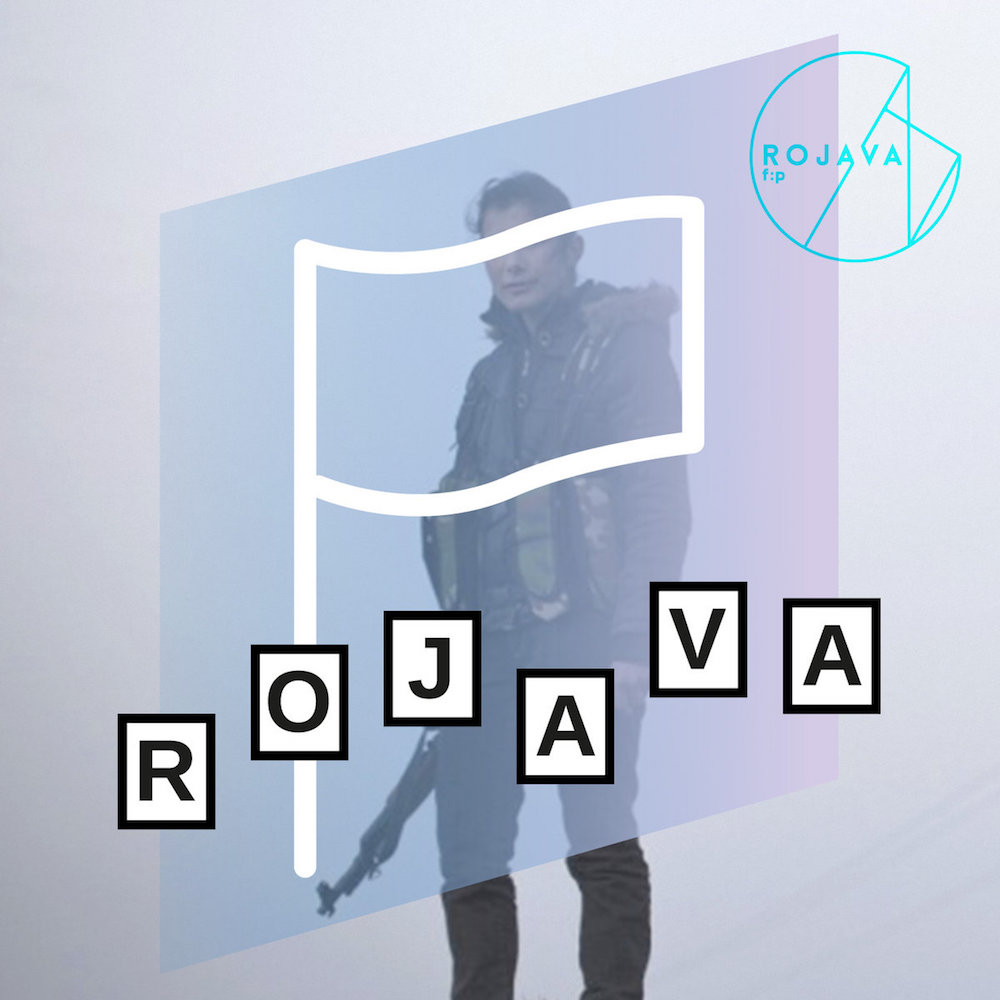 The first voice you hear on Rojava Revolution is a song sung by Viyan Peyman, an artist, activist and fighter for the Women’s Protection Unit, an all-female unit of over 7,000 women fighting against IS/Daesh in the semi-autonomous region of northern Syria known as Rojava. On ‘Dear Viyan’ she lives as a sample. Peyman was killed in battle about a year ago.

Her beautiful voice and that devastating realization set the tone for this compilation put together by the electronic music network female:pressure. Released on International Women’s Day with all proceeds going to Rojava’s The Village For Women Project, the 12 tracks were culled from an open call asking for music “in the service of a daily revolt against women’s oppression and the suppression of life force as such by male, capitalist militarism and its death cult.”

The power of the collection comes from the platform the producers give to others through their minimal techno, industrial noise and sound collages. Most of the guest vocals are pulled from interviews, and are first person accounts from female activists and fighters.

The album reaches a profound early peak on ‘Woman & The Gun’, which pairs a tense, glitched pulse by Sky Deep with a spoken part by activist Hevî, entrancing you with its taut atmospheres only to stop in deafening silence at key moments in the discussion. Other more traditionally techno moments, such as Empty Taxi’s anxious ‘Ishtar’ and the MLK-sampling ‘Warrior’ by Ksenia Kamikaza, give Rojava a unity that’s rare in compilation albums.

The release also takes advantage of Bandcamp’s ability to add liner notes for individual tracks, giving Rojava Revolution the depth of an internet art installation. Each track comes with writing, links, stories and messages of hope provided by the artist. The vocals on lo. batt.’s penultimate ‘160227 آه كوباني {“Ah Kobanî”}’ are revealed to be sampled from a woman singing as a doctor tends to her battle wounds, as the video proves. At one point she smiles and gives a peace sign, right as the English subtitles reference Kobani’s streets being “full of blood and corpses”.

More than just an album, Rojava Revolution provides a space to experience music and art while learning the stories of people both alive and dead. “This song is a piece of our soul. Hope lives in these frequencies,” says one contributor. Explore Rojava Revolution and you’ll discover that soul – it forms some of the most compelling protest music of of our time. 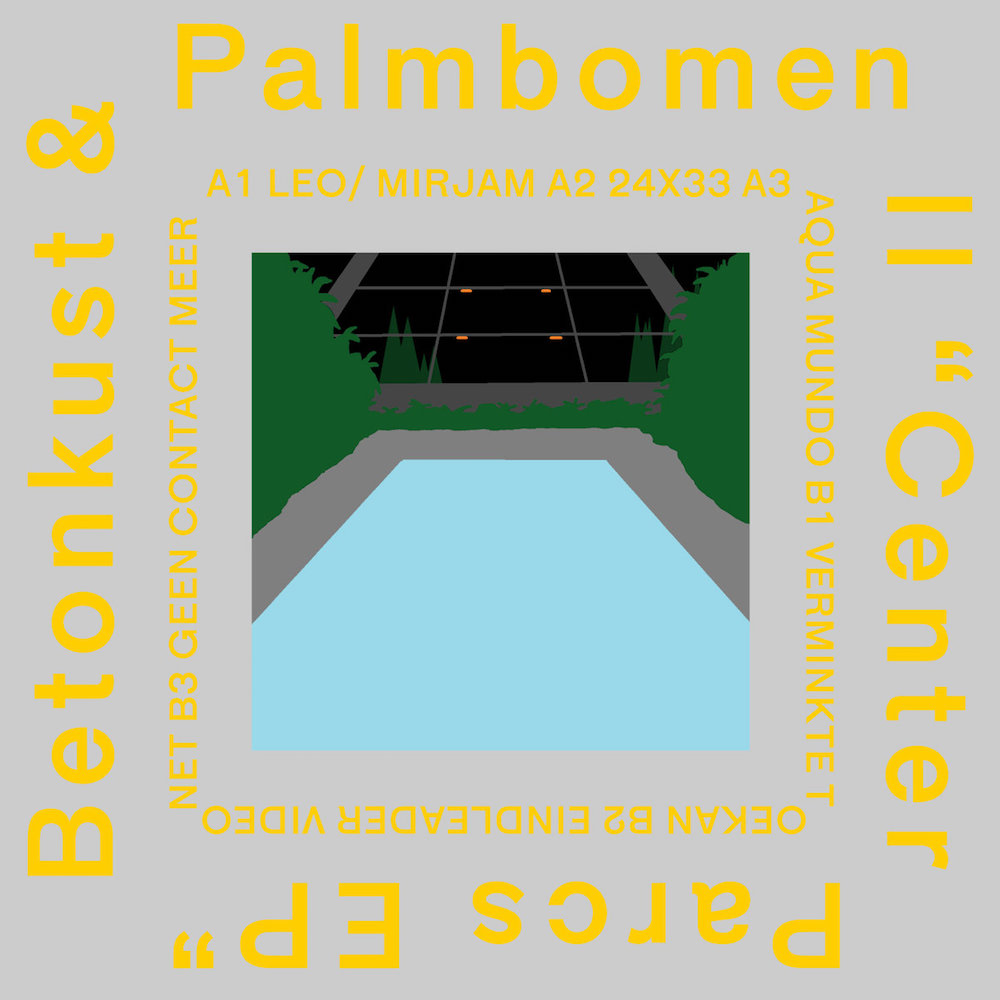 Listening back to Kai Hugo’s 2015 debut as Palmbomen II makes this release on 1080p seem inevitable. That album found Hugo indulging his imagination to create some of the most warped house music of the year, and this EP with the likeminded Betonkust is a welcome next step.

Warped exotica was always an essential part of Palmbomen — the name refers to the fake palm trees of Europe’s enclosed faux-tropical resorts — but Center Parcs, named after an actual resort, is the first time that influence has been so explicitly referenced. It’s an important distinction which leads to some of his best tracks, such as the tropically charged ‘Verminkte Toekan’, which drifts into the sunny, wandering ‘Eindleader Videnet’.

The previously released ‘24×33’ splits the difference between those two with sighing synths constantly tapped awake by a bright, chiming melody; meanwhile, the driving opener could have soundtracked some lost waterslide level in Streets Of Rage II. It’s his most focused release yet, but still sounds a bit like a old VHS tape of a vacation might look. 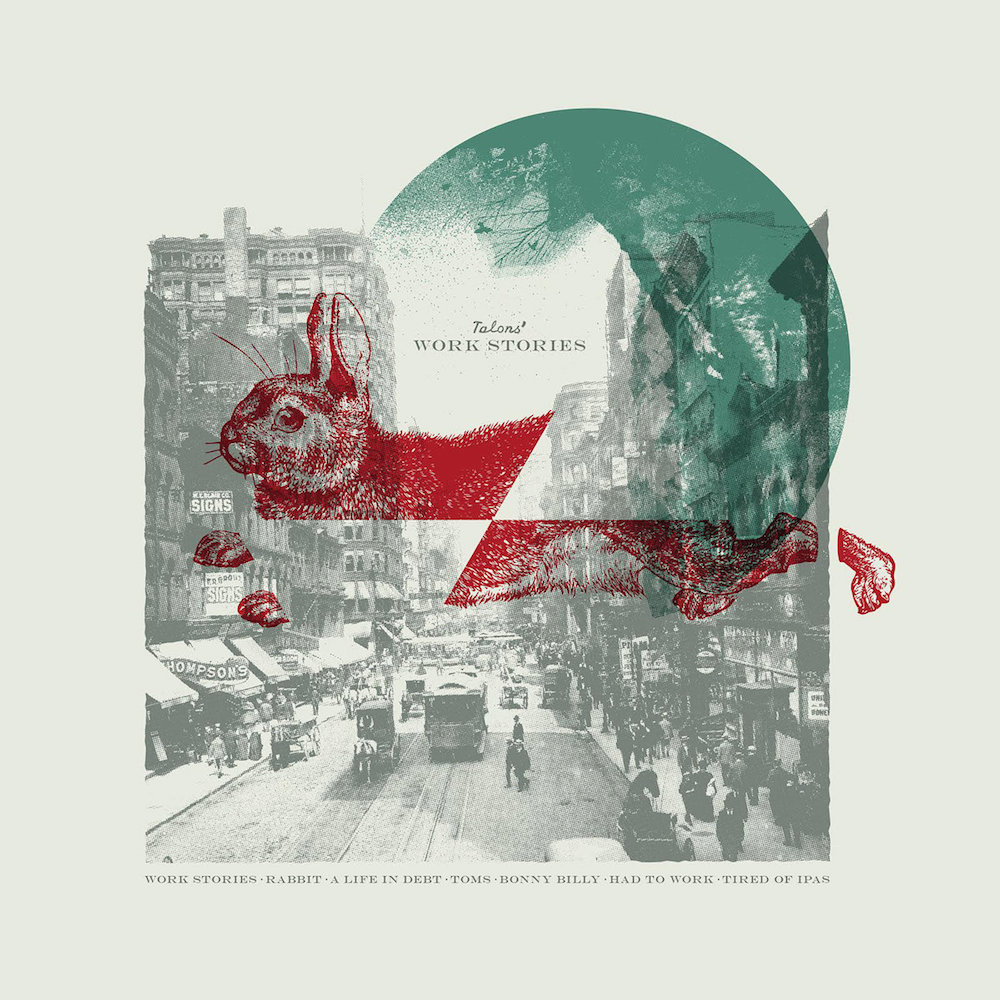 Akron-based folk musician Talons’ opened this year with a song about seeing a car crash on 65 North highway. He’s not clear whether the driver survived, and by the time he gets to the car going “across the median, towards the truck that I just passed,” the shock is too much, and from that moment his focus dives inward. He’s on the phone, complaining about his job. “Will my last words really be so trivial?” he asks. What followed was Growing Up, a stunning collection of diaristic songs intended as the second piece of an ongoing series. Now we have a third.

In Talons’ own words, Work Stories collects “songs about sprawl, fading optimism, losing track of house shows, NPR, etc.” Each track jumps from some brief, seemingly insignificant moment and dives into all the streaming thoughts, fears, hopes and regrets they might trigger. If any of this reminds you of the recent work of Mark Kozelek’s Sun Kil Moon — yeah, you’re not wrong exactly, but even if the frame of the window might feel familiar, the view inside is entirely different. If Talons’ brings anyone to mind, its Phil Elverum and the Microphones, whose influence shines in the warm, distortion-drenched guitar work of the opening title track, even before being The Glow is mentioned explicitly on ‘Bonnie Billy’.

On that track, he starts by lamenting his job, where no one has heard of his favorite records, before concluding with the realization that he doesn’t even listen to them anymore. That feels like a petty complaint out of context, but the power of this project is in its cumulative strength – how each song teaches you things about the others. Later, on ‘Tired Of IPAs’, we learn: “Now I’m missing my wife’s pregnancy / Working overnight at a job that I hate just to keep our healthcare.”

Talons’ describes what he does as “a new folk music made to resonate now rather than endure for decades,” and that makes sense, but with each concurrent release in this series he adds to an ever growing self-portrait. Where is he going? I don’t know. Where are any of us going? 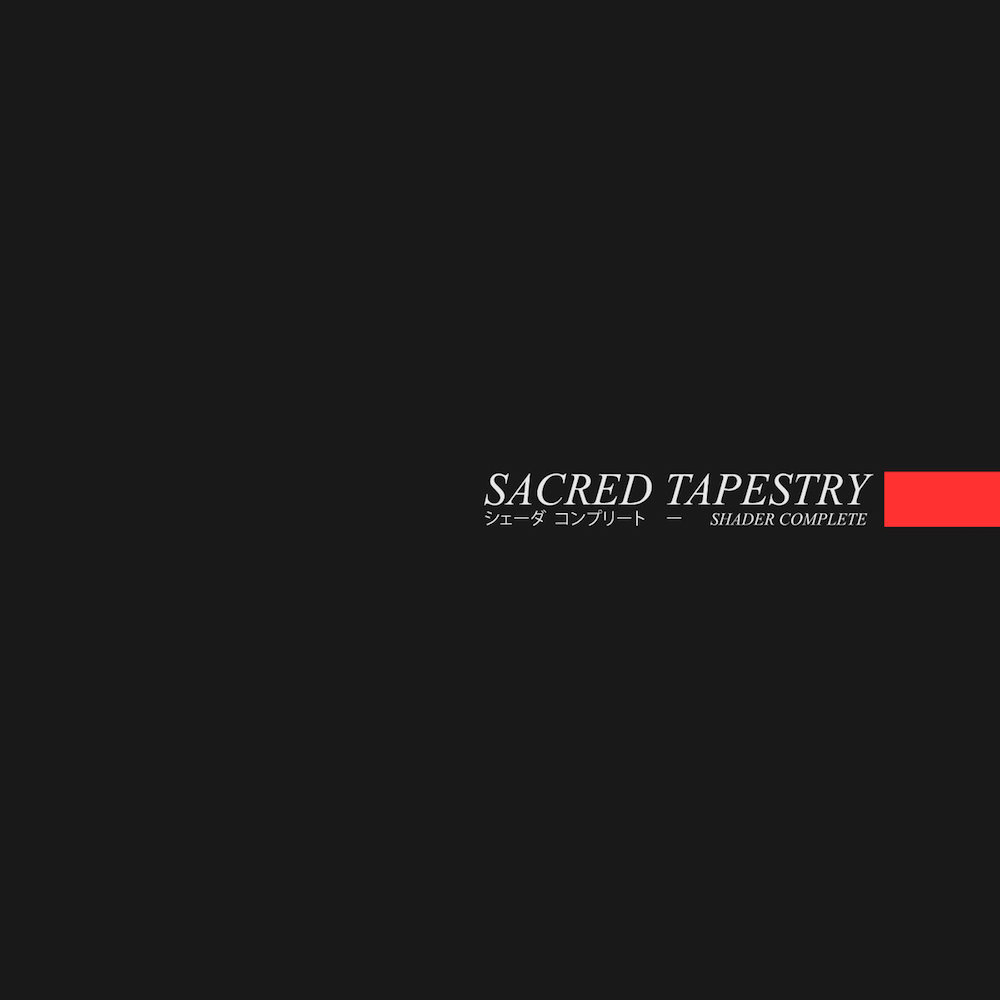 In the strange world of Bandcamp, it’s a big deal when Vektroid releases something. Her work remains one of the foundational influences on so much of what you’re hearing in underground music on the platform, and (as I’ve said before) I really wouldn’t be writing this column in the first place without her music. Vektroid’s work has slowed so much in the last few years that even a single song feels like an event — so imagine the surprise of many this Valentine’s Day when she dropped three entire albums — two previously deleted releases now reworked, and an unreleased record completed in 2013.

The brief and exciting glimpses of new material we’ve heard from Vektroid sound miles away from the vaporwave she helped pioneer, and in some way these refurbished releases feel like an opportunity to close that chapter before moving on. They offer a look back at her – and really vaporwave’s – formative years, from the minimal vignettes of Fuji Grid TV through “the lost chapter” of Sleepline to the far denser soundscapes of Shader Complete, the album that originally felt like the end of the project back in 2013. With the long awaited Vektroid album finally coming this year, these foggy, naggingly familiar collections might be one deep breath before the dive. 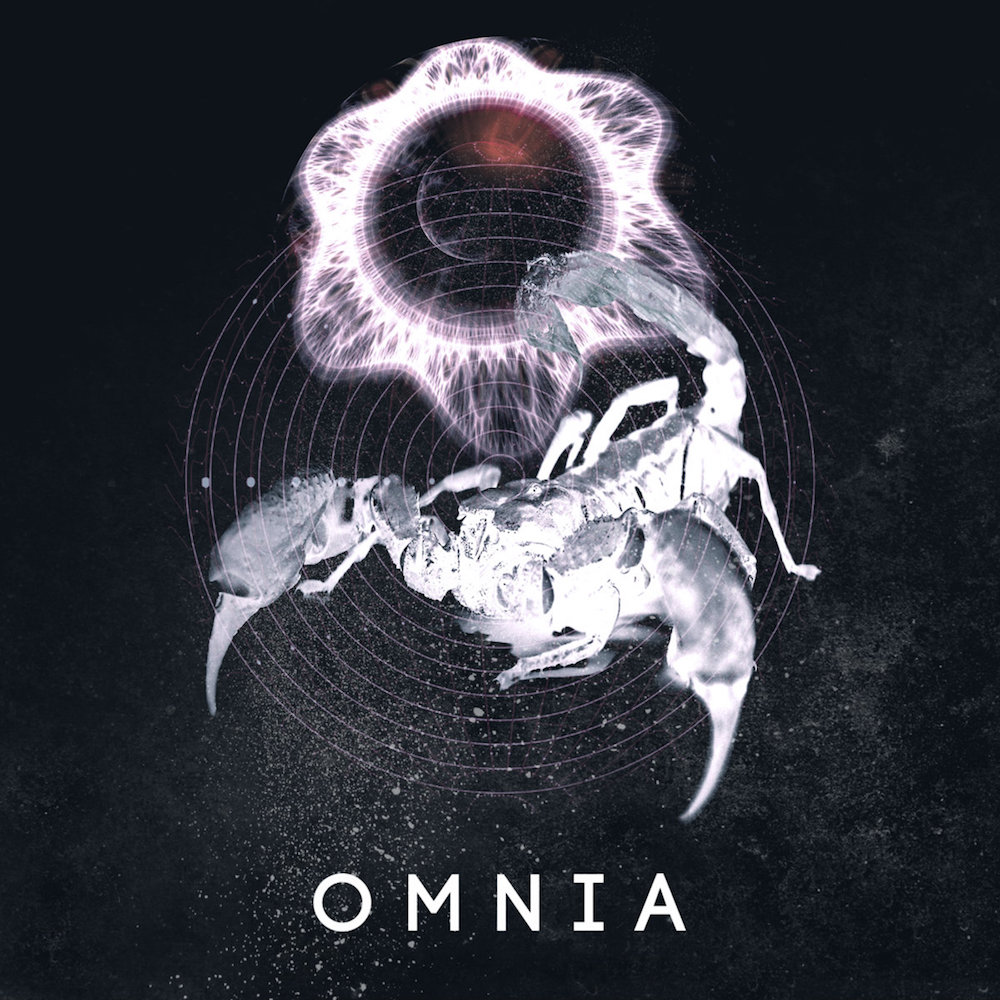 HKE is likely better known through his old moniker Hong Kong Express and as one of the founders of Dream Catalogue. Yet on the slippery, surreal new album Omnia, the altered name and the move to Olde English Spelling Bee make sense. Hong Kong Express releases, like last year’s brilliant HK, have been bleary affairs — their dark, dreamy atmospheres lit by soft streaks of neon not unlike the lonely cityscapes that grace his covers. While those dreamlike atmospheres remain, Omnia often feels like an inversion of those previous records, diving deep into futuristic, alien territory.

It’s an album marked by jagged sonic edges and sharply focused sound design, best exemplified on ‘Zero’, which abandons the lonely late-night glow of Hong Kong Express for synths with the anxiety and glare of search lights. That’s only one of Omnia’s aggressive peaks alongside the strobing overload of ‘Odium’ and the mutated epic ‘Requiem’, but even the more ambient moments, like ‘As Foretold’, are fraught with tension. The album’s one exception is on the gorgeous closer: a generous moment relief appropriately titled ‘Awake’. “It was all a dream” might seem like a cop out ending, but after the harrowing journey Omnia puts us on, it’s more than welcome. 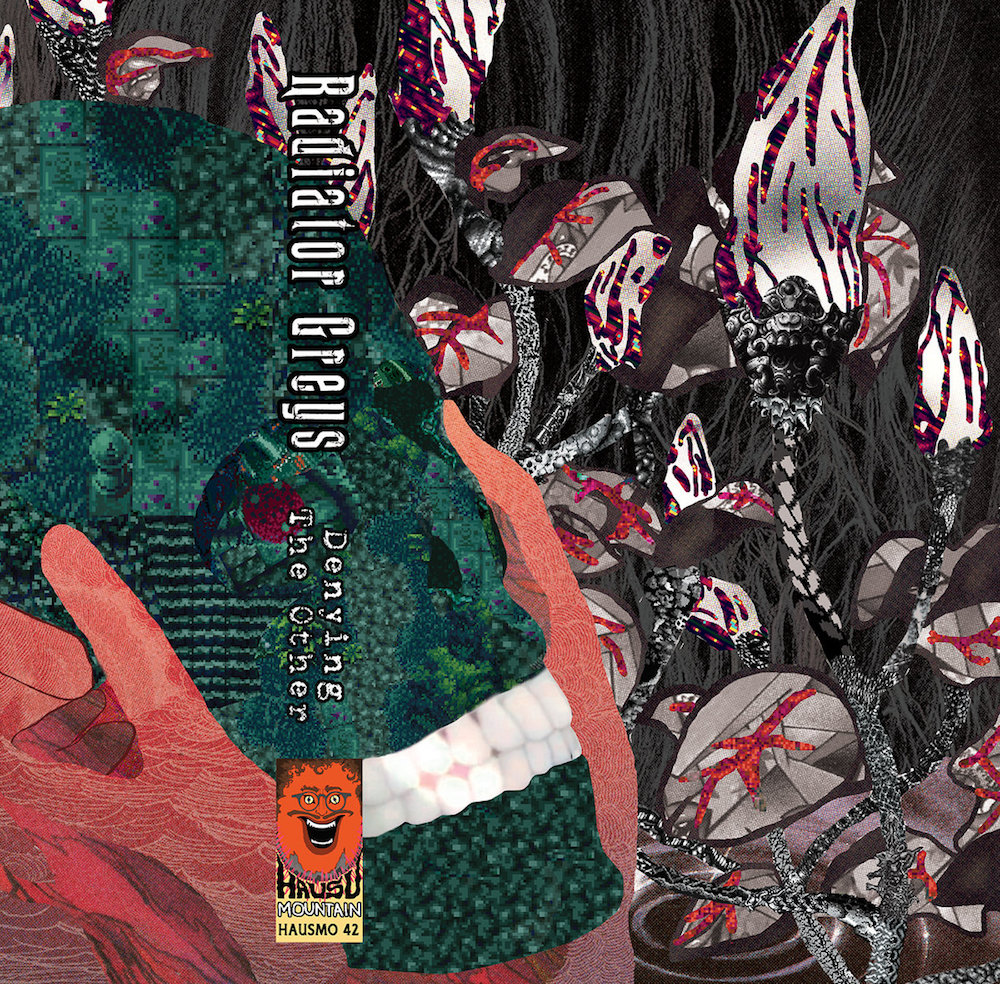 Radiator Greys
Denying The Other

Denying The Other begins with a boy reading The Chronicles Of Narnia, the sample patiently sinking into a foggy drone, and ends with savage, blood-curdling screams and a beat that lurches as persistently as the It Follows monster. As Radiator Greys, Josh Levi gets between those two points through five pieces which show his keen sense for structure, tension and release. It’s not just the way Levi guides you along towards his climaxes, but the range he moves through to make them.

The penultimate ‘Wait’ operates on a heavy, rigid beat, but carefully weaves in passages of immense beauty alongside garbled noise, splitting the difference between its opening and closing peaks. Although the journey through Denying The Over is never a straight line – in fact, it’s a total sensory overload at times – Levi makes it absolutely worthwhile. 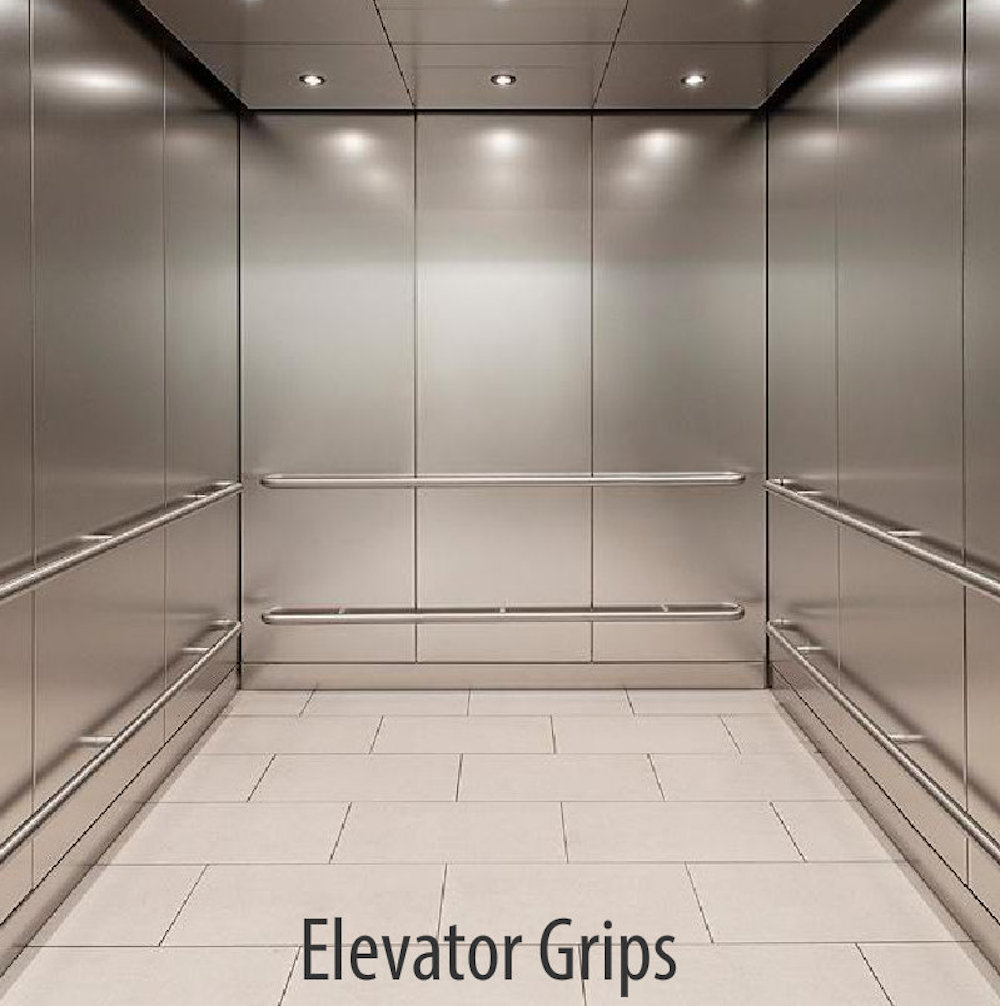 You could call Elevator Grips many things. A practically no-effort release made with software that writes music for you (terribly). A parody of a good, but intensely humorless, project. Something that was likely made on drugs, and probably not even particularly good drugs. A dumb joke? A VERY dumb joke.

PersonalIy, I see it as a gauntlet being thrown down. Death Grips used to be genuinely unpredictable, they used to feel artistically dangerous! But what now? One of their last releases had Bjork on it, and the response was a collective shrug. If Death Grips wants to shock us again they should listen close. Burn it all down again guys, break out the xylophones or something.