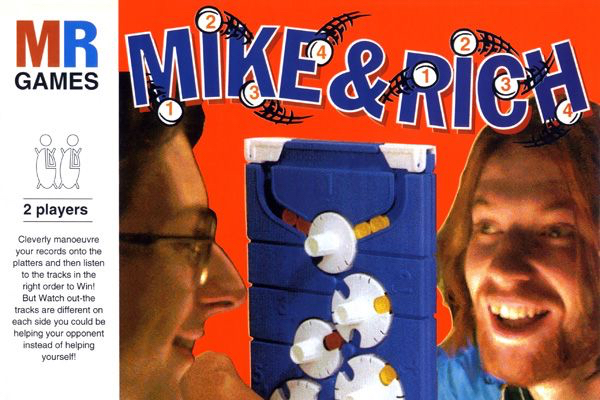 Back in 1996, old chums Richard D. James (better known as Aphex Twin) and Planet Mu boss Mike Paradinas (better known as µ-Ziq) put their heads together to brainstorm a bizarre collaborative album under the name “Mike & Rich”. The self-titled album, which became widely known as Expert Knob Twiddlers thanks to its excellent cover art, was described by Paradinas at the time as “an updated version of easy listening and funk”, and it’s a description that pretty much holds up.

Today, Planet Mu took to Facebook to post a selection of posters snapped by fans in record stores of the album’s iconic artwork. Interestingly, the posters include a line mentioning that it’s a reissue bundled with seven (!) unreleased bonus tracks – not bad eh? The label has confirmed that these extra tracks are “from the vaults”.

FACT dug a little further into this mystery, and discovered a now-deleted Tumblr post which contained a screenshot of a comment made on Richard D. James’ SoundCloud dump. On the comments for ‘Cheetah3 Teac’, the owner of the account (who at this point we have to assume is Mr. Twin himself) says “supposed to be re-releasing EKT with some extras when I get it together.”

We have reached out to Planet Mu for more information, and will update when there’s anything concrete. For now, listen to ‘Mr. Frosty’ below.

Read next: The 100 greatest IDM tracks of all time.