FACT picked London’s NAO as one of 10 R&B singers to watch in 2016, and with good reason. She’s just released her debut album For All We Know and is already notching up acclaim for her hybrid take on soul, R&B, house and garage. Claire Lobenfeld talks to the singer-producer about growing up with pirate radio, working with Jai Paul’s brother A.K., and the rich symbolism of her videos.

NAO is one of the most exciting up-and-coming voices in R&B, but she’s only been around for about two years. Her deft ability to meld UK garage, house and dubstep with the tenets of soul and R&B have been much more successful than many hybridists who have come before her — and a lot of it has to do with her penchant for patience and methodology.

Discovered during her tenure as a backup singer for artists including Kwabs and Jarvis Cocker, NAO (née Neo Jessica Joshua) roots herself in training and experience outside of the public eye. It’s why her pair of introductory EPs, 2014’s So Good and 2015’s February 15, which are already being reissued, caught attention without much fanfare. Her music doesn’t require quirks because her talent just speaks, or sings, for itself. Her debut full-length, For All We Know, hit stores on July 29. It seems like a quick turnaround for someone who’s only been making her own music for a couple of years, but the journey started in her childhood.

Growing up in East London with her mother and siblings, music was always around. “Everyone had their own device, whether it was a Walkman or stereo. My brothers listened to pirate radio and would practice MCing all the time.” Absorbing soul, rap, grime and UK garage was not only nourishing, it helped her get cool points among her classmates. “I loved dancing to UK garage, I loved singing to it, I loved knowing all the latest songs that were out so that I could go into school and sing them,” she says. “Everyone would be like, ‘What’s that song?’ and then they’d hear it on the radio the next week.”

Although singing was her dream, as a teen it was her mother’s way of keeping her out of trouble. “My mum found this singing club around the area where we lived and I’d have singing lessons there, and we’d do little concerts and small festivals or go in the market and sing.” It gave her pocket money and the motivation to continue on to study jazz vocal and composition at the prestigious Guildhall School of Music & Drama. “Studying jazz was a way for me to broaden my musical understanding,” she says. “Jazz isn’t necessarily a straight up part of what I do now, but the things that I learned definitely infiltrate the music.”

Her first two EPs tell their own version of NAO’s musical history. While they are rich in soul and funk, the influences of dubstep, house and UK garage are thick, especially on February 15 opener ‘Inhale, Exhale’. It’s one of a couple of older tracks that has made it onto For All We Know and the changes which that song and ‘Adore You’ from So Good have gone through are evidence of how NAO’s commitment, training and openness to collaboration have helped her redefine and refine her sound.

It’s hardly surprising to find her nailing the kind of retrofuturism that so many other artists attempt. The title track from So Good was a collaboration with A.K. Paul, whose brother Jai was something of an alt-R&B numen when his unfinished XL debut was leaked on Bandcamp and became one of the most celebrated soul releases of 2013.

Working with A.K. taught NAO how to bring lightness to her work. “Before I met him, my stuff was a lot darker. There’s something really amazing about what he and his brother Jai do – it’s intelligent, but funky. It makes you feel happier, but it’s still interesting [to] the ear,” she says. “When I went in to do the session with them, and I wrote the topline for ‘So Good’ and I was like, ‘Why is this so easy for me?’ I realized in that moment that it came easy because it was super soulful, and that is literally what’s in my heart, what I sing all the time.” 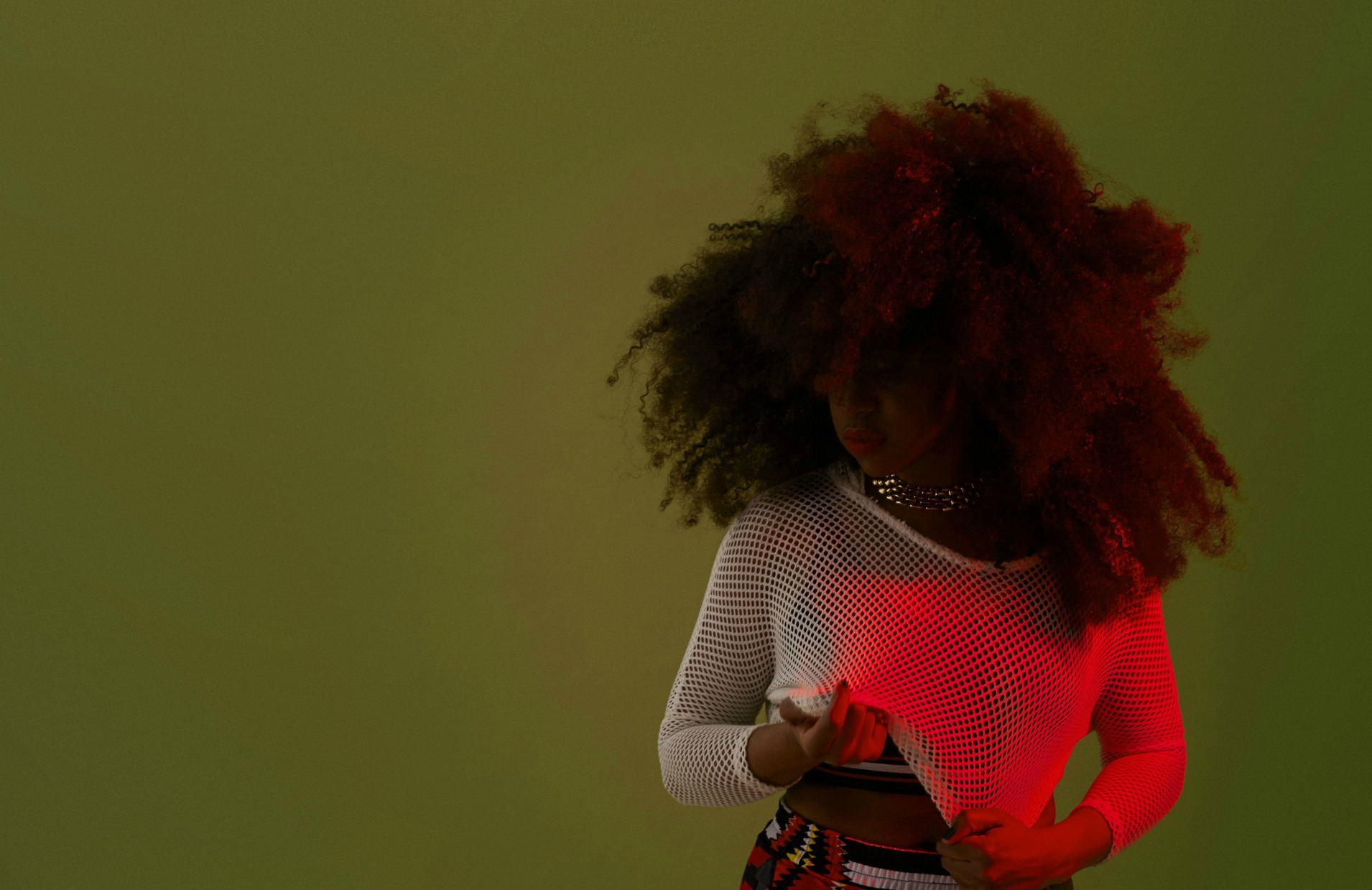 “If you listen to your insecurities, they hold you back”

Her soulful early influences — Michael Jackson, Prince — were what she wanted to explore, but it required a journey. “I finally think I’ve arrived at how to interpret that for myself within this album,” she says. For All We Know sounds both nostalgic and concerned with what comes next in soul music, a little like what Janet Jackson was doing with The Velvet Rope, except where that album was muted and lonely, NAO’s record is brightly colored and imbued with themes of emotional freedom.

You hear that on ‘Give Me A Little’ and ‘In The Morning’, two of For All We Know’s best tracks. Both play big on the heart — the good and the bad parts — and on sound. There are moments throughout the album that offer a sense of ‘90s throwback, but it’s not used as an empty trope. It doesn’t take long to realize why you’re getting that kind of musical deja vu: NAO isn’t following trends, but that kind of fun, experimental R&B, which is both pop-leaning and deeply indebted to soul singers of the past, is hard to come by. Typically, what we’re delivered from the genre is either pure pop (Chris Brown, Tinashe), entrenched in rap (Jeremih, Ty Dolla $ign) or deeply rooted in the club (Kelela). NAO takes a sound we used to know and adds her own spin to it. Last year The-Dream said that R&B is always “alternative” because of its constant reinvention — NAO is daring to forge a path for what’s next in the genre.

Some of that is taking inspiration from people who have already pushed into new frontiers. She cites James Blake and Beyoncé as contemporary influences and lists Lemonade as something that’s delighted her this year. It’s clear that NAO would find inspiration in the complexities of Lemonade’s visual component — for her, the details aren’t just in the music, they’re in the videos, too. Released last year, her full-length’s lead single ‘Bad Blood’ took on an earthly spirituality when she pushed out her visual interpretation of the song.

“The naked lady represents Eve or Mother Nature. She has to be naked because I can’t imagine what Mother Nature would look like in clothes. But what was beautiful about her was, even though she was naked, the audience didn’t [seem] to sexualize her because she wasn’t supposed to be,” she explains. “She’s come across these characters who are trapped in a state of mourning or lost, they’re attached to this ‘bad blood’ – something has happened, and they can’t get out of it. She’s realigning them to happier memories, she trying to connect them back to better times and that’s symbolized by the trees growing out of their mouths.”

Grappling with the past is important for NAO. The ‘Bad Blood’ follow-up ‘Fool to Love’ isn’t a love song, she notes, but about fighting your inner demons. “The lyrics say, ‘I was a fool to love you, we could have had it all,’ which is me saying to those demons, ‘We shouldn’t have listened to you.’ If you listen to your insecurities, they hold you back.” For the video, she enlisted Top Boy actor and former garage MC Ashley Walters, who battles with an invisible character throughout — a character who is actually just his interior self. “He’s fighting himself, he’s fighting the things that make him feel bad and hold him back. He’s dealing with that quite visually and physically,” she says. “Does he win? I don’t know, really. I hope so.”

Asked if she would like to make a visual album like Lemonade, she’s pragmatic. “If one day there should be enough money in the book to allow that, that would be amazing.” Between iPhones and the internet, people now have the ability to make larger-than-life projects on a home video budget. But from speaking to her, it’s clear that NAO doesn’t mind the wait — she likes to get things right. After all, that patience is what got her here in the first place.

Read next: Meet Alexandria and Ethereal, the Aaliyah and Timbaland of Atlanta’s Awful Records