Beyoncé returned this week with another “visual album”. But what do its abstract images mean, where do they come from and what light can they shed on the songs? Chris Kelly searches for the subtext and inspirations beneath the bubbles of Bey’s Lemonade movie.

If Beyoncé’s 2013 self-titled album was the proof-of-concept for the “surprise visual album”, then Lemonade is its apex. That last effort felt like an anthology of music videos. Not Lemonade, premiered in full on HBO on Saturday night. A sophisticated hour-long art film that uses movements and motifs, not just tracks on an album, its breadth and depth see it surpass similar pop soundtrack films like Kanye West’s Runaway and Lana Del Rey’s Tropico, which now seem quaint in comparison. Lemonade is in a league of its own.

It’s a hero’s journey through grief. If her self-titled album was micro – a personal exploration of feminism, career and self – then Lemonade is macro – an exploration of those themes across time and place. And while the album is stunning on its own, it’s in visual form that Lemonade truly comes to life.

This is in part down to the cadre of directors curated and assembled by Bey, some of whom you may recognise, others you may not. Kahlil Joseph has directed short films for Kendrick Lamar and Flying Lotus and music videos for Shabazz Palaces and FKA twigs. Melina Matsoukas is a long-time Beyoncé video director who helmed ‘Formation’. Todd Tourso (Beyoncé’s creative director) and director-cinematographer Dikayl Rimmasch on the other hand have relatively short videographies, especially when compared to music video legends like Jonas Akerlund (‘Haunted’, ‘Superpower’, the On The Run documentary) and Mark Romanek (who reportedly shot Lemonade’s ‘Sandcastles’ segment).

But unlike the album’s carefully demarcated music credits, the film credits are left vague. The result is an even gauzier picture of who contributed what to the project, which only reinforces the cohesive quality of the film. Without specific credits, viewers and critics can only speculate about authorship. Beyoncé’s suicide dive into water resembles a similar shot in Flying Lotus’ Joseph-directed Until The Quiet Comes short film, and those sped-up, smash cut spasms are reminiscent of Akerlund’s past work, but who’s to say who authored what? And more importantly, who really cares? On Lemonade, Beyoncé is the auteur.

But mysteries remain. Why the grand New Orleans vistas? Who inspired the film’s already-iconic baseball bat scene? And what’s True Detective got to do with it? Pour yourself a glass and explore the art and allusions behind Lemonade.

Though she was born and raised in Houston, Beyoncé’s maternal grandparents were both Louisiana Creoles, and it is her generational connection to Louisiana (and New Orleans, specifically) that drives so much of Lemonade.

One of the frequent settings is the ruins of Fort Macomb, a location featured in the first season finale of True Detective. In the HBO show, Fort Macomb was Carcosa: the mystical, mysterious villain’s lair where darkness prevails. In Lemonade, Fort Macomb represents the persistence of history, its hideaways and tunnels evoking the Underground Railroad. When guitarist Little Freddie King appears in one of those tunnels during ‘Daddy Lessons’, he’s not only a silhouetted stand-in for Beyoncé’s estranged father Matthew Knowles, but an homage to an entire line of Delta blues guitarists (King is a cousin of the late, great Lightnin’ Hopkins).

Throughout the film, there are no clear demarcations between reality and surreality or past and present; color and black-and-white are used interchangeably. A young girl in the plantation house could be Beyoncé, or Blue Ivy, or Beyoncé’s mother, or the daughter of a slave – she represents any and all of these women.

Lemonade lingers on the mothers of Trayvon Martin, Eric Garner and Michael Brown as they hold photos of their murdered sons; they are intercut with actresses who hold photos of long-forgotten men, connecting Martin, Garner and Brown to a long, pitiful tradition. And during ‘Daddy Lessons’, the film intercuts home video footage of Matthew Knowles with both Blue Ivy and Beyoncé at the same age. In True Detective, Rust Cohle memorably posited that “time is a flat circle”; in Lemonade, Beyoncé maintains that “the past and the future merge to meet us here.” 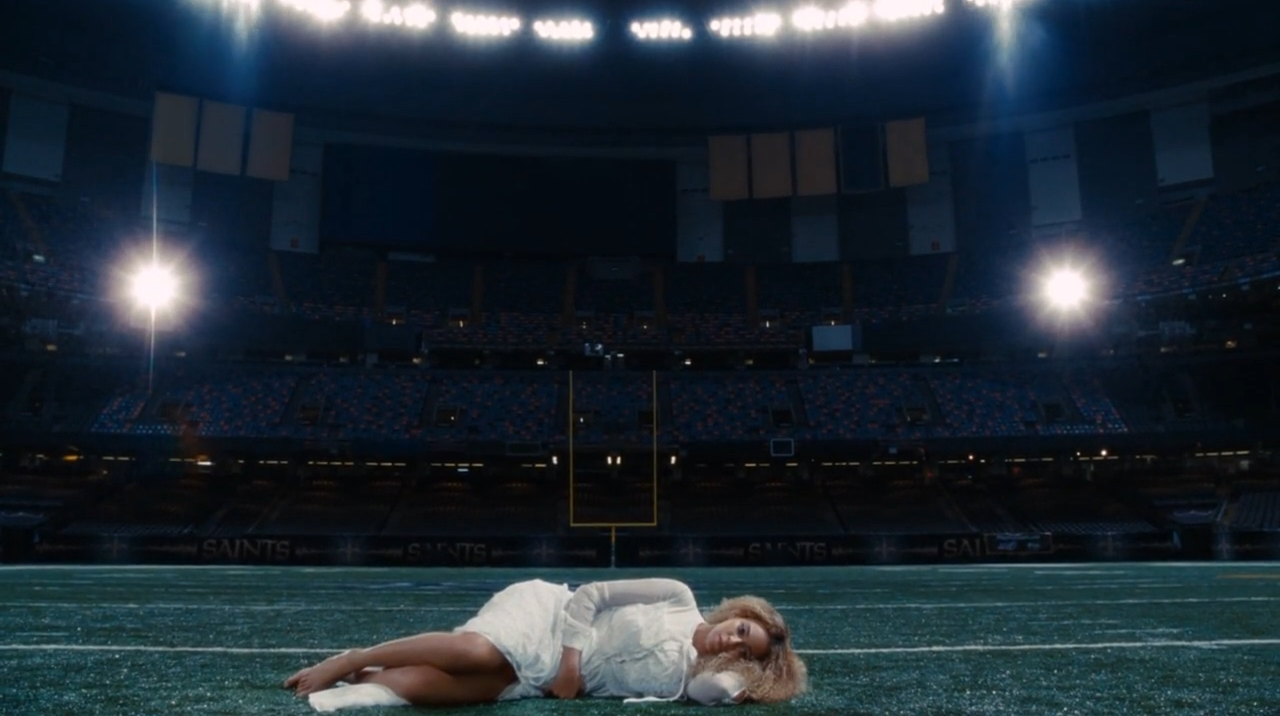 Throughout, Lemonade pays tribute to New Orleans culture, from jazz funerals and the Edna Karr Marching Band to Mardi Gras Indians and Queen of Creole cuisine, Leah Chase. Beyoncé also returns to the Superdome, which was not just the site of her first Super Bowl performance but a shelter of last resort after Hurricane Katrina, where three people died.

Lemonade repeatedly returns to the moss-covered bayou, to buildings that resemble plantation homes and their attendant slave quarters. But instead of an antebellum memory, these scenes portray a dream: the fantasy of an all-black, matriarchal utopia when women dress up, prepare meals, take photographs and perform shows, not for a master but for themselves. Anachronistic details like period dress and antique cameras contribute to the dream-like feeling of these scenes, which evoke post-Civil War black towns like Zora Neale Hurston’s Eatonville, feminist gatherings like the Michigan Womyn’s Music Festival and (as dream hampton notes) Julie Dash’s Daughters of the Dust.

The music of Lemonade contains a handful of samples and interpolations of everything from an OutKast classic to a tweet by Vampire Weekend frontman Ezra Koenig. Likewise, the Lemonade film is rich with allusions to and inclusions of the work of others. Most notable is the poetry of Somali–British writer Warsan Shire (who is credited for both “film adaptation and poetry”). Adaptations of Shire’s previously published poetry and seemingly new material are spoken by Beyoncé throughout Lemonade, providing context and connective tissue that is vivid, explicit and visceral.

After Shire’s poetry, the second most immediate allusion is the video for ‘Hold Up’, which is seemingly inspired by Pipilotti Rist’s 1997 video installation ‘Ever Is Over All’. Described by MoMA as a “whimsical and anarchistic scene,” ‘Ever is Over All’ features a woman smashing car windows with a long-stem “flower” much in the way that Beyoncé does with a baseball bat. The ‘Hold Up’ video is equally whimsical and anarchistic, Beyoncé’s L’Oreal commercial smile contrasted with fiery explosions.

On occasion, multiple allusions combine with original work, with layers of meaning. During “Apathy” (which includes the video for ‘Sorry’), a music box version of Tchaikovsky’s “Swan Lake” plays, as Beyoncé reads a eulogistic poem (in voiceover) to a troupe of dancers that are painted with the Yoruba-inspired ‘Sacred Art of the Ori’ of Laolu Senbanjo. A Nigerian visual artist, Senbanjo has describeed the Sacred Art of the Ori as a “spiritually intimate experience” that connects the minds, bodies and soul of both artist and muse. Here it is part of a web of connections between Beyoncé and her lover, Africa and America, pop music and classical. 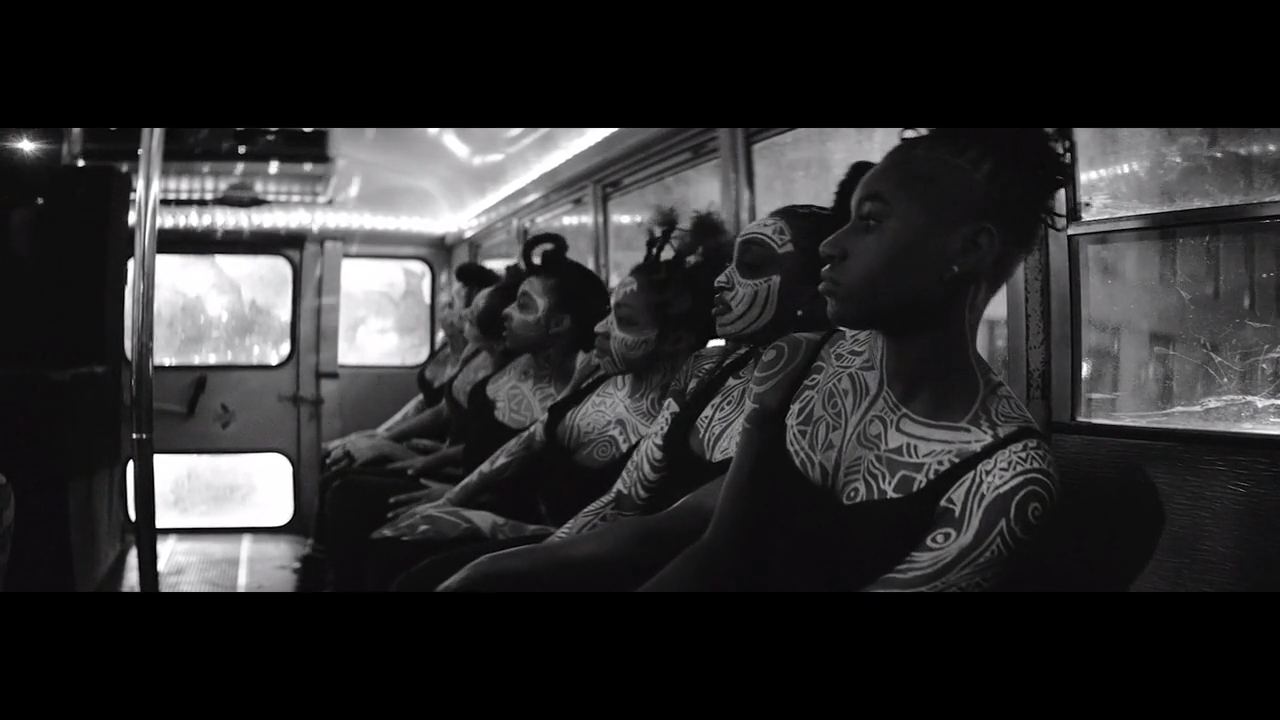 Known as the “Who Taught You to Hate Yourself?” speech, Malcolm X raised issues of self-hatred – of hair texture, skin color, nose shape – that Beyoncé explores on ‘Formation’. And while the quote is specifically about black women, its inclusion opens a portal to the past that reveal truths about the present, asking questions about police brutality and black self-love that have still not been answered. In Lemonade, a lyric begets a quote that (possibly) begets knowledge that is only a Google search away.

Beyoncé looked not just outward for inspiration on Lemonade, but inward as well. The film nods back to her previous work, specifically the visual components of Beyoncé. In ‘Anger,’ as Beyoncé threatens to wear the skin of her lover’s mistress over her own, dancers wear white fabric that is stretched over and connects their bodies, a visual reminiscent of the similarly costumed dancers in ‘Ghost’. Likewise, ‘Hold Up’ features the surveillance footage of ‘Haunted’ and well as the destruction of ‘Superpower’ (both directed by Akerlund).

The allusions to her previous work and the work of others are most effective when combined, like in ‘Emptiness,’ the chapter soundtracked by ‘6 Inch’. Beyoncé rides in a limousine, much like she did in ‘Partition’, but where ‘Partition’ was about a backseat encounter with her lover, ‘Emptiness’ is heavy with the red lights, peep show stages and street pick-ups of anonymous sex work.

Perhaps another nod to her apparently altered relationship with Jay Z is the lace bodysuit she wears while burning down a bedroom, which resembles the ones worn in promotional materials for her Mrs. Carter and On The Run tours – efforts that namedropped and featured her husband. And even when the references are imagined (that red hallway and flickering light evokes David Lynch) or more oblique (the lightbulb swinging is reminscent of Massive Attack’s Kate Moss-starring ‘Ritual Spirit’ video), they only make the symbolism richer.

Her own public image

Much of the discussion of Lemonade has focused on the truth of the narrative (is it specifically about her marriage? Who is Becky with the good hair?). The film uses techniques that further blur the distinction between fact and fiction.

While much of the film is stylized and cinematic, there are many moments that rely on documentary-like footage, like the segment of “Accountability” that focuses on a New Orleans man who was inspired to change his life after meeting President Obama. There are also what appears to be home movies (Matthew Knowles with his daughter and granddaughter, Beyoncé and Jay Z getting married, getting tattooed, going on vacation) and footage that is shot in a grainy home movie style (the women on the street, the couples in love, the family on the stoop, the people in ‘Daddy Lessons’). The quote from which Lemonade draws its title (“I was served lemons but I made lemonade”) comes from a video of Jay Z’s grandmother Hattie White’s 90th birthday celebration.

Juxtaposing documentary and narrative footage underscores what Beyoncé has done with her lyrics, toying with the distinctions between public and private, general and specific, real and fake, past and present. Just as she did by intercutting the mothers of Trayvon Martin, Eric Garner and Michael Brown with actresses holding photographs of unknown men, Beyoncé suggests that the distinctions are less important than some may make them out to be. 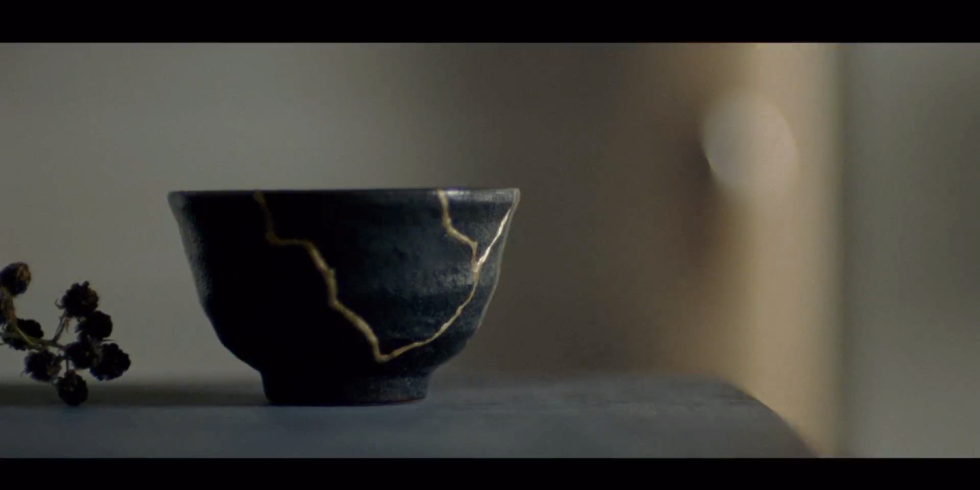 After drawing on art, poetry, history and cinema to allude to the seven stages of post-infidelity grief, Lemonade drops perhaps its most telling detail around the 40-minute mark with a brief shot of a small cracked bowl. The bowl is Japanese kitsugi, or “golden joinery”, a style of ceramics which repairs broken pieces of pottery into new objects, with the previous cracks left visible through lacquer mixed with powdered gold. The meaning is pretty clear: a broken bowl, or a broken relationship, can be fixed – and the work it takes to repair can make the final object more beautiful than it was before.