Aphex Twin doesn’t talk much, but when he does, he loves talking about gear. Scott Wilson digs through some of his most revealing interviews to chronicle the synths, sequencers and other devices that helped define his influential sound.

Richard D. James has probably generated more online debate about what gear he uses to make his music than any other producer. He’s notoriously secretive about his practice, and it can be difficult to differentiate facts from fiction in many of the interviews that do exist. Talking to Future Music in 1993, he claimed to have built or converted almost all his synths, and said that he’d been crafting musical devices since he was a teenager.

“I didn’t have any equipment when I started,” he said. “I used to make tape loops and put them on ghetto-blaster motors or reel-to-reels that I could get for five quid from junk shops. I did a hell of a lot with those, like creating finished collages of sound that I’d then make, say, five copies of. I’d sync up all the motors and play the tapes back, fluctuating the tape speed to create effects like flanging, chorus and phase-shifting.”

Whether James is quite the technological genius he claims to be is up for debate, but his music suggests he’s got an effortless way with hardware that most producers would struggle to achieve over a lifetime spent in the studio. A rare live video from 1993 shows James hunched over a table full of gear, long before all-hardware techno sets were as prevalent as they are now.

Many of James’s claims are unverifiable (and some fans have speculated that his live sets are at least partly prefabricated), but a few things seem concrete: the huge list of gear used to make Syro on the record’s sleeve, his love of modular synths, DAT tapes and other obscure and obsolete items.

Reducing the vast list of gear he’s used to just a few key components is a difficult task, but below are seven that show how his sound has evolved, from the early tracks made with a cheap Casio sampler to his experiments with one of the most baffling synths ever made. 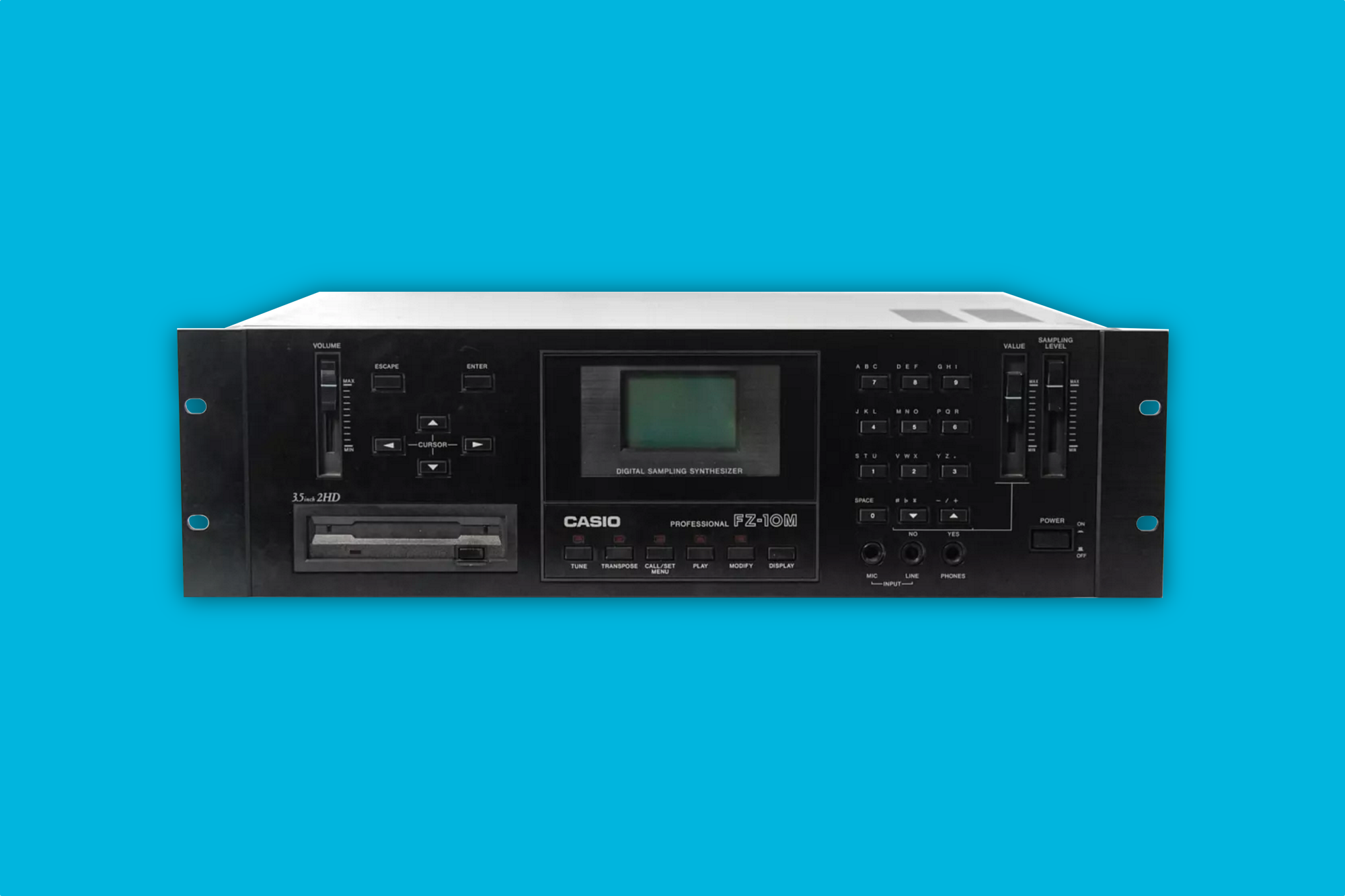 Samplers have been a core part of James’s sound since his teenage years. He even claims that he built a sampler for a college project over the course of a year. “The teachers didn’t know what a sampler was, so it was all down to me,” he told Future Music. “It worked for about eight weeks and then packed up. Half the time it didn’t sample, it just made really good noises – mad stuff.”

His most frequently used sampler is Casio’s FZ-1 (and FZ-10 rack-mounted version), a hybrid synth and sampler keyboard with a digitally-controlled analog filter famous for its unique bite. The beats on the 1993 Polygon Window track ‘Quoth’ were supposedly recorded on an afternoon spent in a scrapyard beating metal with hammers and then fed into an FZ-10.

He also used a design quirk of the FZ series to create glitches (similar to a trick Autechre would employ). “I used to do this trick on them when I was a kid, turn it off/on really quickly, once in a while it will not quite erase the contents of memory and you get mental corrupted data sounds,” he said in a 2014 interview. At that time there was no glitchy type sounds in existence, which is funny to think about now with the world awash with bloody bit shifters etc – they all sound shit compared to the real thing.”

The FZ series used floppy disks, something that James claims almost lost him one of the tracks from his 1994 album Classics. “Once I was doing a track into the early hours, in Kingston halls of residence – I think it was ‘Dodeccaheedron’ – and I accidentally pressed the off switch, but it doesn’t cut out till you let go, so I was holding on to it with my life like Dutch boy and dike, trying with my foot to get to a floppy disk off a shelf but couldn’t reach it. So I was screaming with twitching finger until someone came to my room to rescue/pass me a floppy!” 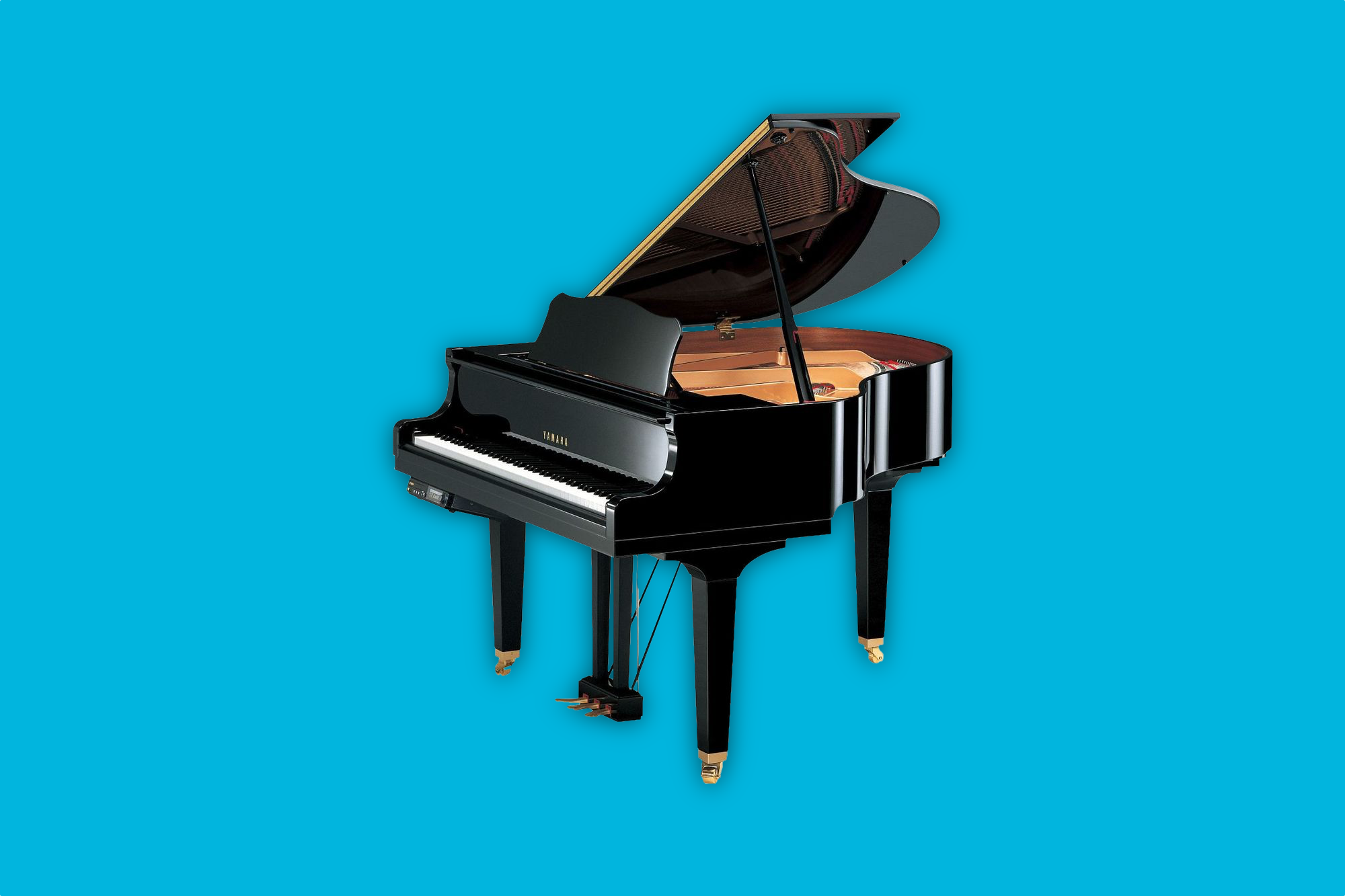 Whether you love or hate the divisive Drukqs, most people would agree that ‘Avril 14th’ is one of Richard D. James’ best Aphex Twin tracks. It’s not just the composition that makes it special; unlike most of James’s tracks up until the early ‘00s, it was recorded with an acoustic instrument into microphones rather than a synth: Yamaha’s Disklavier player piano.

The Disklavier is a standard Yamaha acoustic piano rigged with a mechanism that can play the keys without human input. It accepts MIDI data, so you can write the music on a computer or sequencer and send it to the Disklavier. The result is something that sounds human but not quite; the mechanism that plays the keys make a faint click that can be clearly heard on ‘Avril 14th’, something that only adds to its haunting mood.

In 2015, James released a whole album of mechanically-made music: Computer Controlled Acoustic Instruments Pt2, which combined Disklaviers with robot drummers and other automated music-making tools. It was also a Disklavier that appeared on Syro’s closing track, ‘aisatsana [102]’. 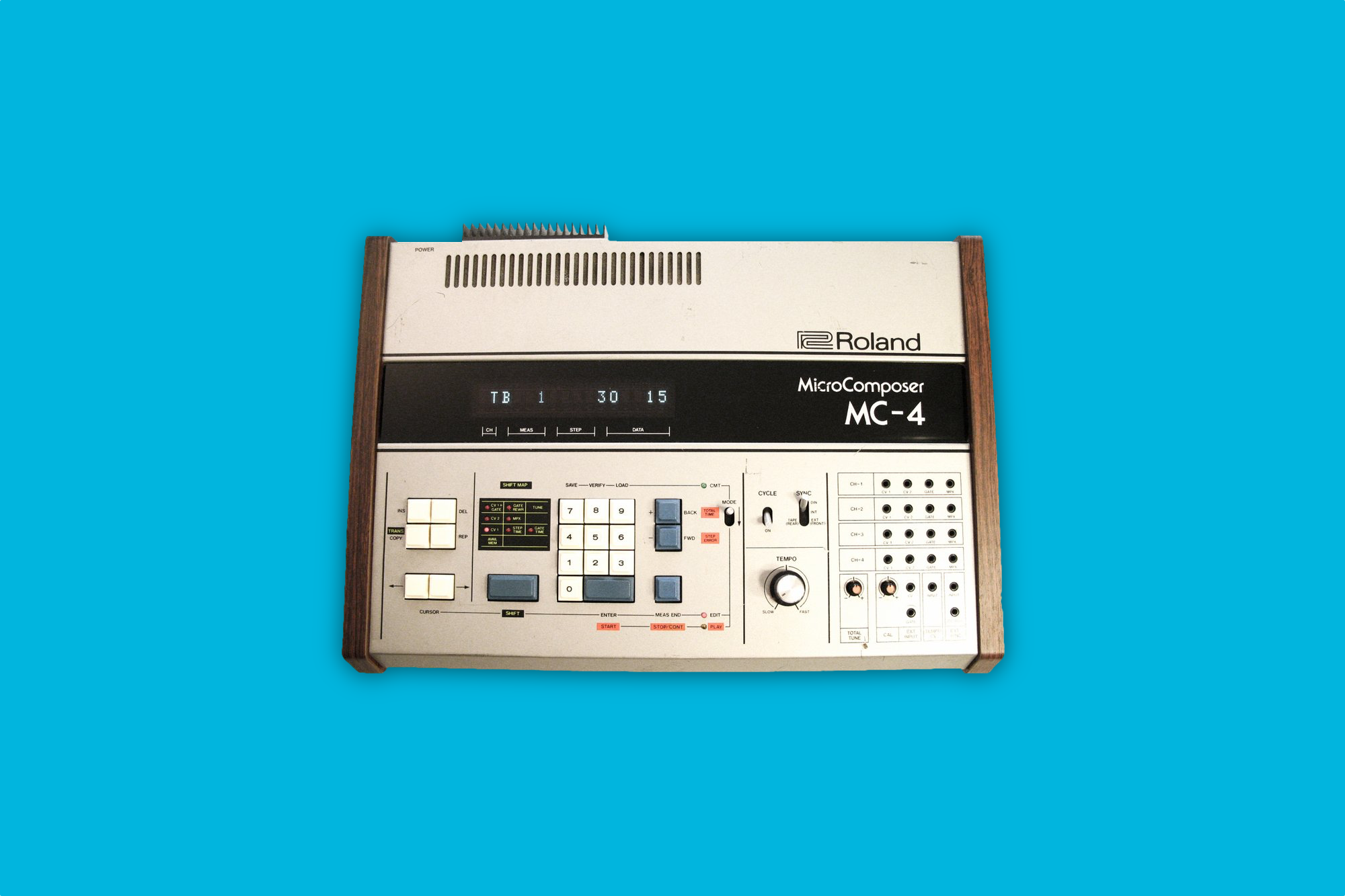 Nobody knows for sure what (if anything) differentiates James’s AFX alias from Aphex Twin, but it’s the kind of music that seems firmly aimed at the dancefloor, full of slamming beats and face-melting acid lines. However, it’s definitely more focused in terms of the gear used. A lot of the Analord series was made with Roland instruments from its golden era: the TB-303, TR-909 and SH-101 (Analord is also an anagram of “A Roland”).

While James sometimes used a MIDI-equipped Atari ST to control his synths in the early years, he’s also highly proficient with hardware sequencers such as the Roland MC-4 Microcomposer. Released in 1981, the MC-4 pre-dates the invention of MIDI, and connects to synths and drum machines via old-school control voltage and gate outputs. While MIDI is more user-friendly, the CV of the MC-4 is widely believed to have more accurate timing.

CV-controlled gear is back in vogue now, but when the Analord series arrived it was decidedly retro. The MC-4’s primitive numeric keypad input is notoriously difficult to program (James once described it as “like making tracks on a taxi meter”) but he used it to make his gear produce wild, unpredictable sounds, especially on Analord 1, whose tight, labyrinthine ‘MC-4 Acid’ proves that MIDI isn’t everything. 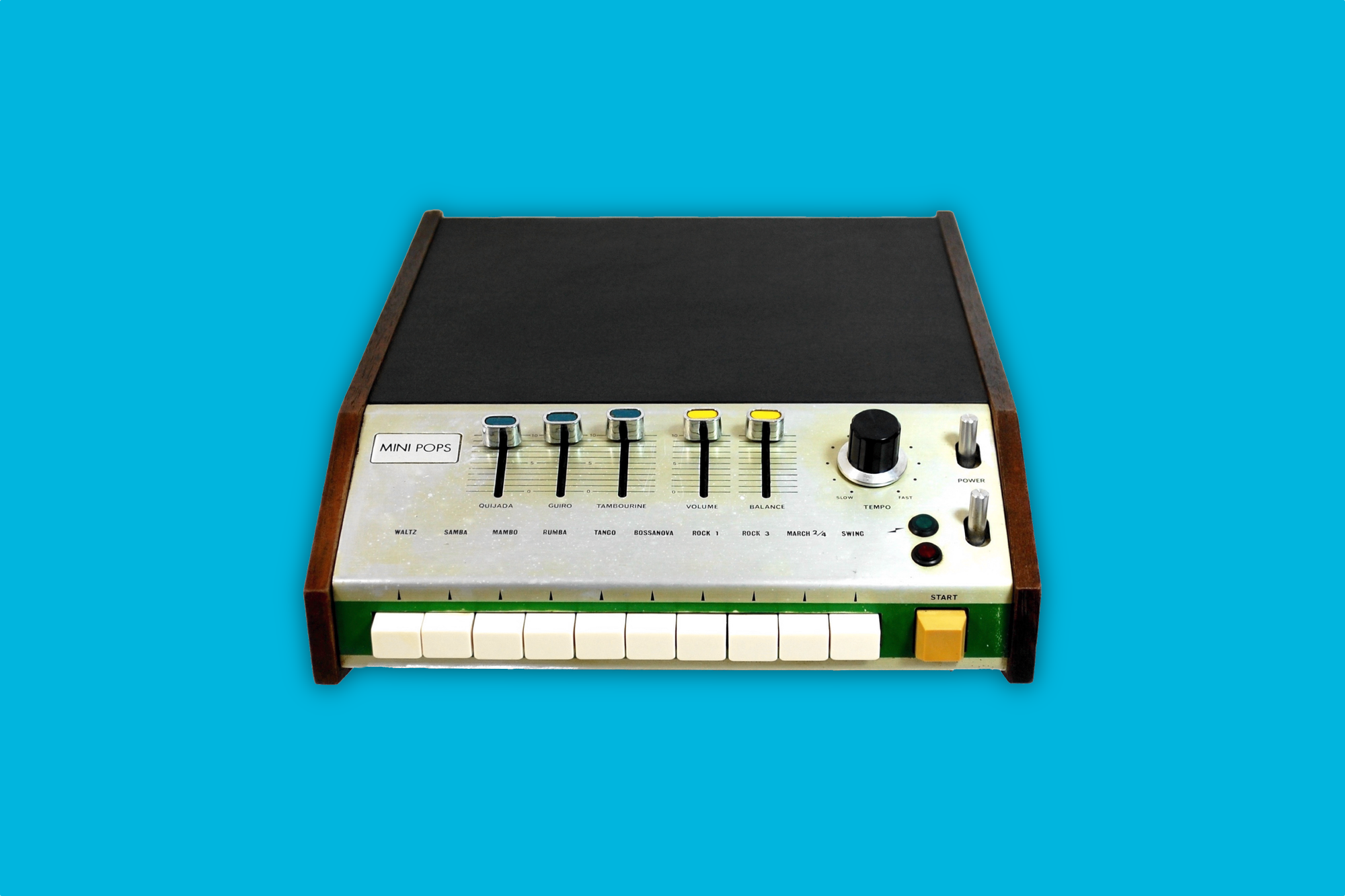 When James made his return in 2014 with Syro, he did away with secrecy and listed all the gear used to make the album on the sleeve. Over 100 synths, samplers, drum machines and effects units went into crafting the album, but some stood out more than others, not least the Minipops 7 drum machine, the instrument that gave the name to opening track ‘minipops 67 [120.2] [source field mix]’.

Released in 1972, the Minipops 7 was released by Keio, the Japanese company that would later be known as Korg. The drum machine was very limited compared to many of its peers; there was no sequencer, and it contained only preset rhythms aimed at lounge musicians such as merengue, jazz-waltz and cha-cha, but it found popularity with musicians such as Jean-Michel Jarre.

As with all of James’s gear, it’s likely that the Minipops 7 heard on ‘minipops 67’ is highly modified in some way. The Syro sleeve lists it as “Korg Minipops7 Midi. sepouts,” which suggests it’s been modified to be sequenced over MIDI (a technology not invented until 1983) with separate outputs for each drum sound. Where other musicians would probably just use an off-the-shelf 808 or 909, James retrofitted an obsolete samba looper and made it a piece of kit gear heads would kill for.

“I bought a Roland 100M mono synth when I was 13… but I got really pissed off with it,” James told Future Music in 1993. “I started customising my keyboards, then changing the components. When we started secondary school there was an electronics course, so music and electronics went hand-in-hand.”

Nobody has been able to verify whether James’s Frankenstein synths are real, but we do know that he’s a fan of the Eurorack format, which allows him to build his own instruments with different modules. The Syro gear list names at least two Eurorack modules: Make Noise’s DPO and the Intellijel Rubicon (CIRCLONT14 [152.97] [shrymoming mix]), both of which would allow him to create unique sounds that would be tricky to do with all-in-one instruments.

“The freedom to patch whatever you want, getting out of the chair to plug something – it’s like a quest/journey when you start patching,” James has said of the appeal of Eurorack modular gear. “Making connections in that way seems very natural to [the] way my brain works.” 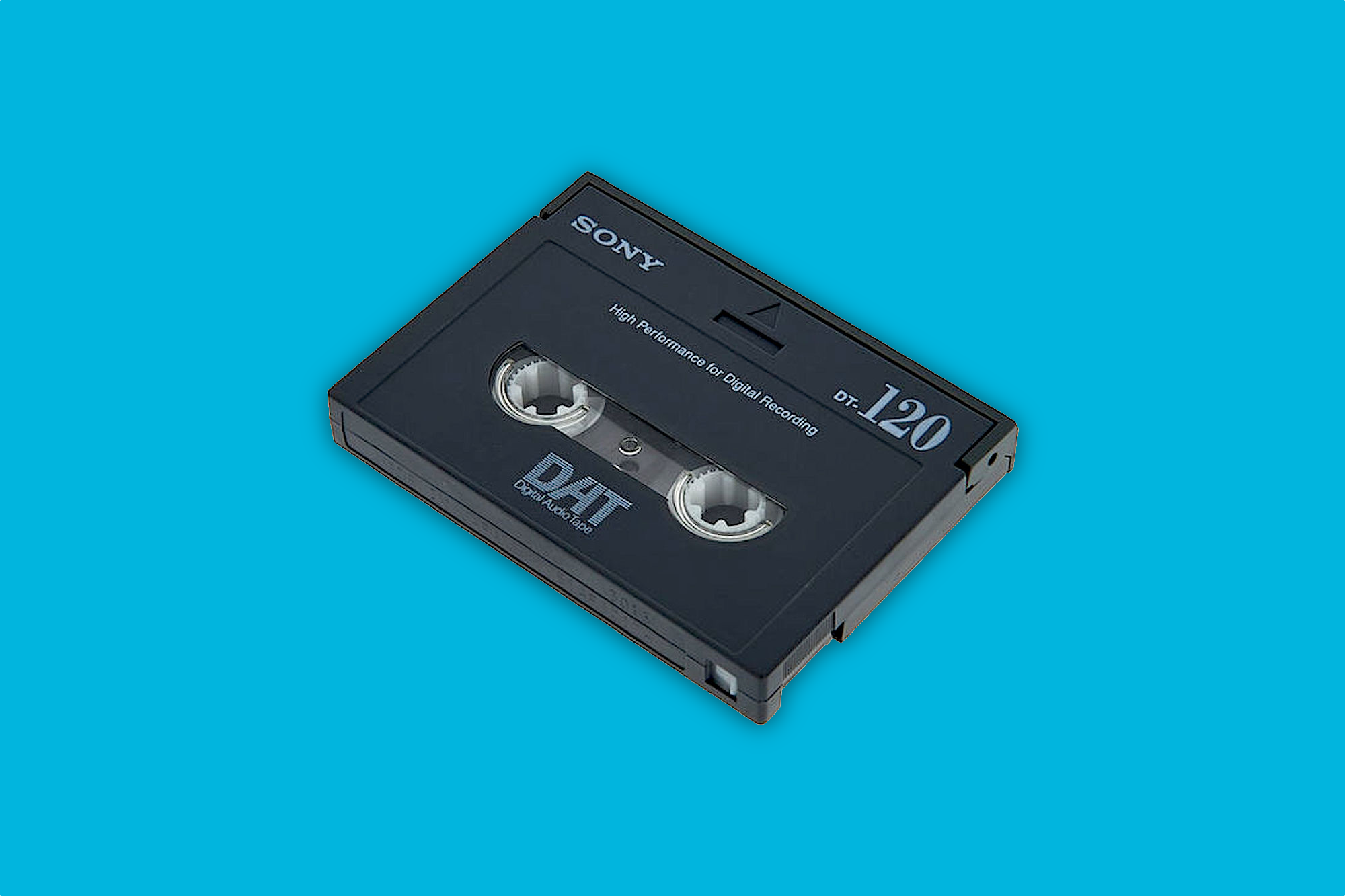 If you need proof of the extreme nerdery of Aphex Twin fans, go to the WATTM forum, where you will find an entire discussion about whether Selected Ambient Works 85-92 was recorded onto cassette or DAT.

A digital form of tape offering much higher audio quality, DAT was developed by Sony and introduced in 1987 (James claims he didn’t buy a DAT recorder until 1993, meaning SAW 85-92 was likely recorded on cassette tape).

Using a DAT isn’t noteworthy in itself, but James claims he used the long play mode to achieve a more lo-fi sound rather than go for high fidelity. “Sean Booth [of Autechre] said to me once, ‘do you record all your tracks on long play?’ I was quite impressed he worked that out, used to do it to fit more tracks on the DATs! Wasn’t bothered, it was loads shitter quality.”

It’s difficult to tell exactly which Aphex Twin tracks were recorded onto DAT, but at least some of the infamous SoundCloud dump from 2015 was culled from tapes in his archive. Some people maintain that DAT has a character that’s as distinctive as cassette tape and reel-to-reel, and if you wanted to recreate James’s sound at home, recording straight to your hard drive probably isn’t going to cut it. 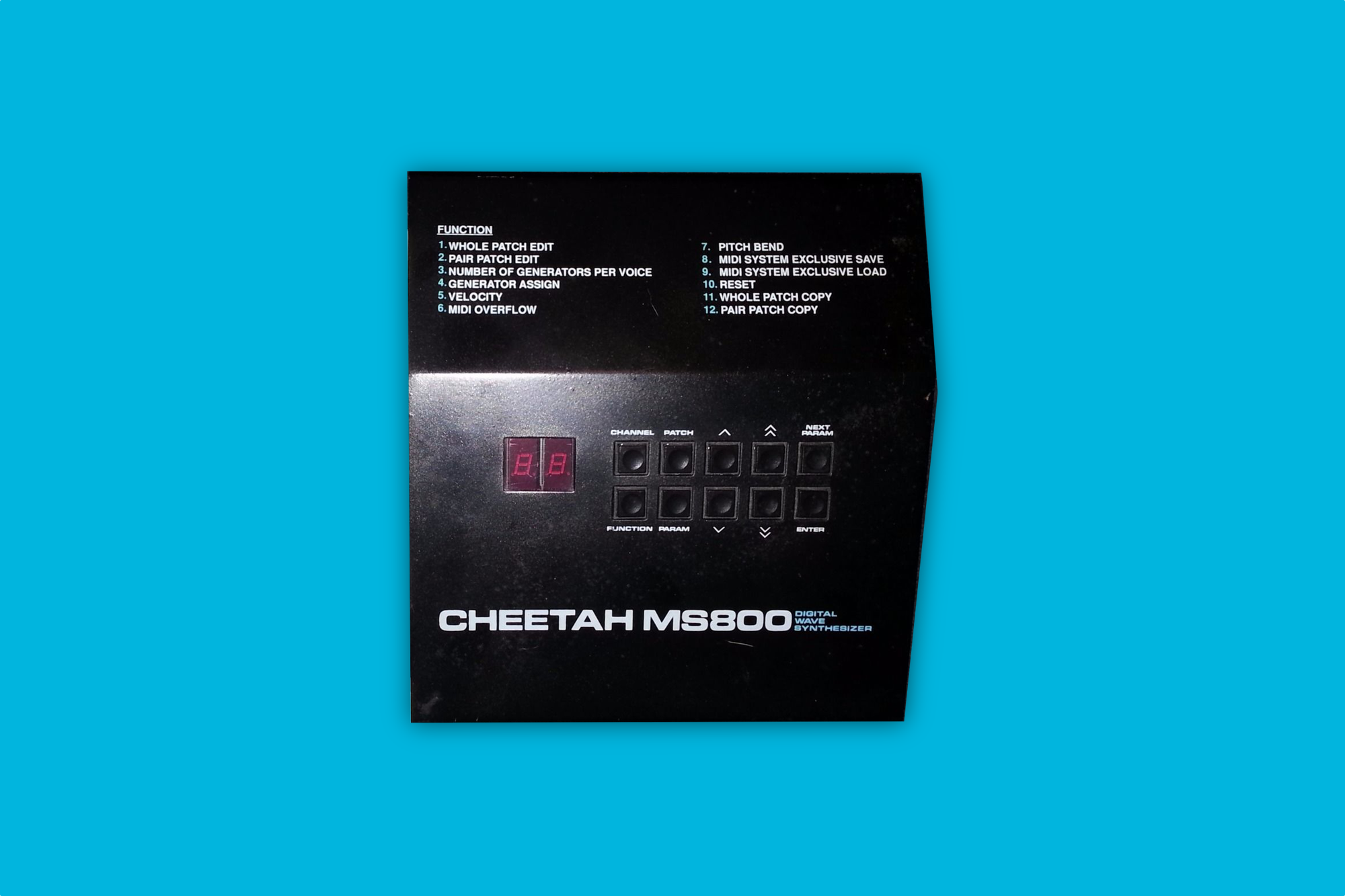 James loves synths so much he dedicated a whole record to one: 2016’s Cheetah EP, which is named after an obscure British digital synth from the early ‘90s. Despite the Cheetah MS800 being described as both “unfathomable” and “mind-numbingly confusing to program,” James supposedly made much of the  clean, digital-sounding EP using the synth.

GForce Software’s Chris Macleod was asked to design sounds for the synth at the time, and had to start from scratch. “The preproduction unit didn’t have a single factory sound, well, not that I could bloody well find,” he said on the GForce website. “The most bizarre thing is that you couldn’t hear your parameter changes in real time. You have to enter ‘edit mode’, adjust your parameters and then exit ‘edit mode’ to hear your changes.”

The MS800 was so central to the concept of the Cheetah EP, Warp marketed it like a piece of gear, with an advert for the EP designed to look just like a classic synth ad and a booth at the Summer NAMM show in Tennessee, where the synth sat in a plexiglass case. Only a man who so famously hates marketing his records would sign off on this.