Es Devlin began her artistic career as a set designer for theatre. In the 30 years that have followed, her practice has evolved to encompass the creation of stage sculptures for musicians including Kanye West and Beyonce, as well as immersive installations such as 2016’s Mirror Maze and global events including the London 2021 Olympics closing ceremony.

Devlin’s latest installtion is ‘BLUESKYWHITE’, a large-scale work commissioned by 180 Studios, which is currently showing at LUX: New Wave of Contemporary Art, a new exhibition co-curated by Fact and SUUM Project. The work combines light, music and language, and was conceived as a sculptural expression of our emotional response to the possible extinction of blue sky.

The installation is formed of two parts: In Part I, text from Byron’s 1816 poem Darkness underscores the viewer’s passage through a 24m long red-lit tunnel. Part II draws from contemporary solar geo-engineering models documented by Elizabeth Kolbert and others which suggest that a haze of suspended particles might reduce global temperature to pre-industrial levels and might also turn the blue sky white.

In this film, we speak to Devlin about her inspiration for the work, and how her work as a visual storyteller has developed throughout her career across stage, music and art.

LUX: New Wave of Contemporary Art is open until December 18 at London’s 180 Studios, 180 The Strand. For opening times and tickets visit 180 The Strand’s website. 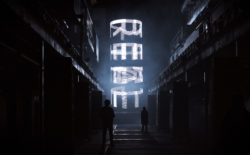