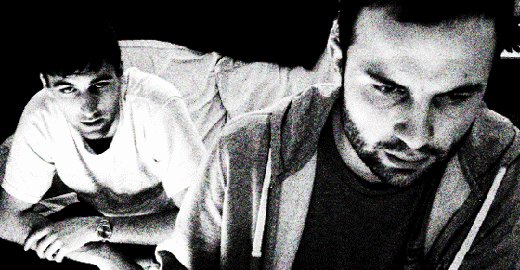 “The final component of the sound in Terminator 2: Judgement Day is Foley. Foley sounds provide pivotal sonic anchors to the body and unify the spaces in which a body moves. If sound effects explore the fragility of the body, Foley places and contains the body within specific spaces. One of the most significant uses of Foley in Terminator 2 occurs in the hospital sequence, as the T1000 is walking down the hallway, scanning for Sarah. The Foley sounds reveal one of the most important science fiction themes: transformation. In this case, the sound design deals with transformation of forms, specifically, human and machine.”

Well, no wonder Darkstar are into it. Foley is a sound production technique used in films which Darkstar talked about when I went to meet them for a cup of tea in steamed-up Stoke Newington café recently. Darkstar are James Young and Aiden Whalley, from Cheshire and Yorkshire respectively: their epic, lovelorn cyborg woozy-step reaches its apex in their heart-stopping single ‘Aidy’s Girl Is A Computer’, which you can read more of my hyperbole about in The Guardian here.

They release their debut album on Kode 9’s label Hyperdub in the new year.

I know you both used to be into bands – was this the case when you first met?

“We met in 2002…everyone we knew was making a lot of garage and grime, we were getting a lot of west London MCs in at the time.”

So did you make a clear transition from guitar bands into electronic music?

“Not really…I had been into bands but I got into garage when I was living in Leeds, and hip-hop too. 2-step was absolutely massive in Leeds, but it was banned as well, it was way too rowdy – Sheffield too. There were no garage nights left in Leeds by 99/2000. There was a massive market for it, but nowhere to hear it out.”

When did Darkstar come about?

Was dubstep a big thing for your development?

“It was, those early days at FWD>> with people like Youngsta, it was actually shocking, it really really impressed me. It’s definitely the best club in London. But its influence on us definitely phased out a year or two ago.

“We record lots and lots of vocals, all the time, we have always recorded songs, we’ve always had vocalists round the house. But there’s less vocoder used in the album, it’s more humanised.”

But there’s clearly a lot of computer love there.

“‘Aidy’s Girl’ came from us trying to make Apple sing to us. There’s a programme called Melodyne, which takes syllables and words and time-stretches them, so the computer does actually appear to sing. But it got a little bit warped, it got a little bit too strange. ‘Aidy’s Girl’ had three whole verses originally, but we had to strip it down and chop it up to fit over the instrumental properly. One full verse is actually on the end of the ten-minute mix for Mary-Anne Hobbs.”

Does the cyborg theme stretch beyond ‘Aidy’s Girl’?

“When we first started the album it was a concept that ran throughout the album, with interludes with two robots talking… but now, we’re not sure how much of that’s going to make the final cut. We’re still deciding.”

Is A.I. pretty shit? I’ve been put off seeing it by so many bad reviews.

“It is pretty shit. But it’s one of those shit films which you need to see anyway. Then obviously we’re named after the John Carpenter film…we like Alien, 2001, Dune, anything like that. We both studied post-production, and started to analyse a lot of science fiction sound production. The use of machinery, the sounds of motors, distorted technology, we’d break down the wall of sound, and read interviews with Foley artists… that was a massive influence on the interludes we wrote. There are three or four drawn-out, string quartet type pieces on the album, that have these kind of robot dialogues.

“The person who did that kind of space soundscape best, last, was Jamie Vex’d. That made a really big impression.”

How finished is the album?

“Not that far away, we’ve got to wrap it up in the next six weeks. The artwork’s been done, the name’s not finalised yet.

“The majority of work completed is full vocal tracks and ranges in tempos and moods. But it has strayed significantly from the sound of ‘Need You’ and ‘Aidy’s Girl’.

“…We have worked with one singer for all of the album and have designed a sound similar to that of the ‘Videotape’ cover we did for Radiohead. All of the music and production has been done by Aiden and myself and I have written all the lyrics apart from one Human League cover. There was much more of a conventional approach to writing the new stuff…we tried to write full songs on a guitar or piano before even beginning to record and produce.

“We feel much more comfortable in doing this because it keeps us interested in developing the track rather than working in loops with a sequencer. It’s refreshing going to the computer ready to record a full mapped out song rather than getting stuck after 32 bars.”

“It was meant to be our live debut at Nail the Cross, but it’s not going to be ready – we’ve bitten off a bit more than we can chew, it’ll take a bit longer. Three or four guys on synths and drum machines, and one singer.”

Can you define the Hyperdub soun

“I dunno, but I’ve got a real sense that Steve (Kode9) is going to move on quickly. I think he’s getting itchy already… I listened to his Radio 1 mix the other day, and it sounded…really tribal.”