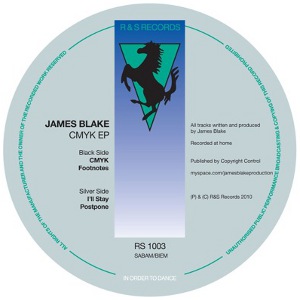 I must admit, when I hear everyone ranting and raving about an artist, my first instinct, instead of listening, is to do the opposite: tune it out and see whether it comes to me. Case in point is James Blake. With so many people, publications and forums hyping this young man up, I wondered whether the hype could be justified.

When I found out he was the guy behind the Harmonimixes, synth-driven bootlegs of Pharrell and Snoop’s ‘Drop It Like It’s Hot’, Destiny’s Child’s ‘Bills Bills Bills’ and Outkast’s classic ‘Ms Jackson’ among others, I was even more intrigued and knew it was time to start playing closer attention to the young Londoner.

The four-track CMYK EP is Blake’s first release for the illustrious R&S label, following shorter singles for Hessle Audio, Brainmath and Hemlock. The opener and title track is enough to prick up anyone’s ears, but it’s hard to put my finger on what makes it so good. Is it Blake’s own vocals that make it, alongside brazen samples of Kelis, Aaliyah and more? Is it those hazy synths, bubbling around with the claps, piano keys and subtle sub-bass before erupting? Either way, it works, and it’s the most anthemic thing Blake’s done to date.

You can barely make out the words on ‘Footnotes’’s re-tuned vocal, while ‘I’ll Stay’ sees Blake drop his trademark synths and sepia vocals to a slower tempo. For me the highlight of CMYK though, is closer ‘Postpone’, with its beautifully arranged chords, ghostly wails and crashing drums.

With his obvious love for R’n’B at the forefront, CMYK sees Blake play with samples – sometimes chopping them to a point where they’re no longer recognisable, sometimes leaving them barely touched – and combine them with his own harmonious arrangements, somewhere between the dancefloor and hotel corridors, on a super sleek EP. I’m sold.