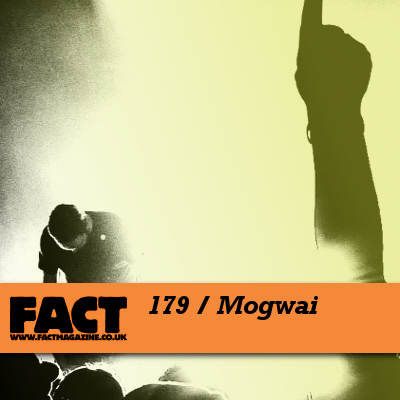 This Friday’s FACT mix is the work of Scottish post-rock legends Mogwai.

Formed in Glasgow in 1995, Mogwai this week released their first live package, taking in a concert recording, Special Moves and a DVD companion, Burning. It marks 14 years of existence for the band, whose early albums Young Team and Come On Die Young represent some of the most influential music of the era – taking the long-form instrumentals of Louisville’s Slint, and injecting them with a very human, and very British melancholy and sense of humour, looking to their peers Arab Strap as well as the likes of The Cure and Fugazi for inspiration. Later in the decade, Mogwai worked with Andrew Weatherall, Alec Empire, The Manic Street Preachers and more.

The noughties saw Mogwai continue to hone their sound, reaching new peaks with tracks like ‘Glasgow Mega Snake’ and ‘Auto Rock’, while also moving into soundtracking, working with Clint Mansell on Darren Aronofsky’s The Fountain and most notably, providing the score for Zidane: A 21st Century Portrait, the film study of French football legend Zinedine Zidane.

Mogwai’s FACT mix was made by long-term member Barry Burns, and features The Fall, Fad Gadget, Tuxedomoon and more – read an interview with him about the mix and recent Mogwai goings on below the tracklist. Special Moves / Burning is out now.

We’re guessing Burning has been taking up a lot of your time lately. How’s that all going?

“It was actually recorded and finished so long ago now that it’s nice to talk about it again. It’s going well and it looks like there’s a decent amount of interest in the film. We had been asked frequently in the past to do a live album and/or film so we got off our arses and did one and we’re pretty proud of the outcome.”

What else have you been up to, music-wise?

“We’re in a gloriously dull industrial estate outside of Glasgow right in the middle of recording the new album now so the last six months have been a lot of writing and rehearsing and gossiping. We also wrote a 20 minute piece of music for the artist Douglas Gordon and Olaf Nicolai for a new project in Germany which will see the light of day soon.”

“Well, I was going to do a (more usual for me) electro / techno mix but I had a very sore back and took a very strong prescription painkiller and in my stupor decided to scrap that idea and have a load of bands like Fad Gadget, Severed Heads and Tuxedomoon plus some other weird little pop tunes from France and Australia. You can almost hear the back pain vanishing as the mix goes on.”

“Apart from the stuff on the mix… John Maus, John Bender and I just heard the new Phantom Band album yesterday which sounds great. But I am a musical fidget and change what I listen to constantly. Could be Bill Callaghan’s sexfunk period work on the iPod next… or Bob Dylan’s skateboarding hits of the 80’s. Yourself?”

Anything Mogwai / Rock Action-related on the horizon you’re able to tell us about?

“We have a new EP from Remember Remember soon plus the Errors remix album (we did a remix on this too). From our tiny stable of Japanese bands we have the final Afrirampo album and a new album from Envy. It’s the first proper Mogwai album on Rock Action next year too so hopefully that won’t ruin everyones super awesome fun.”