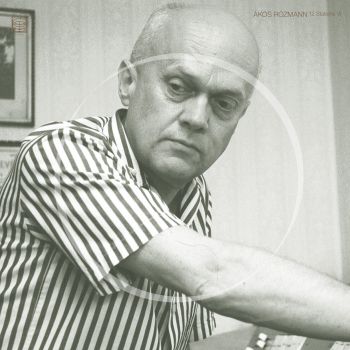 The next release on Ideologic Organ, the Editions Mego sub-label curated by Sunn O)))’s Stephen O’Malley, is by the late Ákos Rózmann.

Rózmann, who was born in 1939 and passed away in 2005, was an electro-acoustic composer who was criminally under-appreciated during his lifetime. He studied composition and organ at the Bartok conservatory and Liszt Academy in Budapest, before earning a scholarship to study electronic music in Stockholm.

Inspired by the electronic tools at his disposal, and by the pioneering work of Pierre Henry, Rózmann rejected traditional acoustic composition entirely – going so far as to declare that instrumental music “had no future”. By day he earned his living as an organist at the catholic St. Eric’s Cathedral in Stockholm, and by night he recorded organ sounds there, to use as source material for his slowly evolving electronic pieces.

Presumably influenced by his own Catholic Weltanschauung and immersion in religious music, Rózmann sought to address big themes in his music, particularly that of the conflict between good and evil. “In Rozmann’s imagined world,” Mats Lindström writes in his album notes, “No room was given to chance. Big powers, luminous or dark, would lie behind the most trivial every day events.”

Over time, Rózmann’s Catholicism ceded ground to Tibetan Buddhism. One of his most famous works, 12 stationer (12 stations), which took 23 years to complete, is a musical interpretation of the Tibetan Wheel of Life.

“During his lifetime he never sought, nor did he win any mentionable recognition,” Lindström continues. “As a true modernist, he didn’t compose with an audience or the critics in mind. His mission was to compose for the future. It was his conviction that the mystical energy for compositional work should derive straight from God.”

It features Rózmann himself on piano and voice, with additional voices Iona Maros (soprano) Miklós Maros and Viveca Servatius. It was composed between 1978 and 2001 at EMS elektronmusikstudion in Stockholm, and cut for vinyl in January of this year by Rashad Becker at Dubplates & Mastering in Berlin. The photos of Rozmann that adorn the sleeve are by Gudrun Edel-Rösnes.

12 Stations VI is available to pre-order now direct from Mego, and has an official release date of April 10.