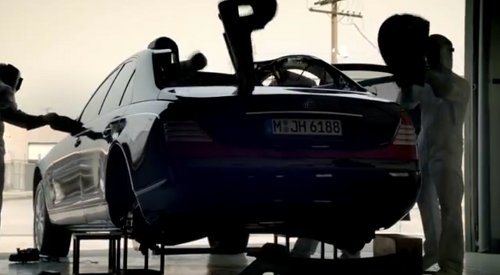 We recently reported that the bashed-up Maybach used in the video for Jay-Z and Kanye West’s ‘Otis’ was being put up for auction.

It looks like Watch The Throne‘s spirit of opulence didn’t extend to the bidders. The customised 2004 Maybach 57 was expected to reach at least $100,000 in auction. As Rap-Up report, however, it ultimately only fetched $60,000 on the night. The lot, promoted as an art piece rather than a functioning vehicle, was sold at the New York Contemporary Art Evening auction on March 8, and was allegedly snapped up in less than five minutes.

The auction was organized in aid of charity Save The Children. Other works available on the night included Andro Wekua’s collage paintings and a portrait of assassinated Fiat executive Carlo Chiglieno by Johannes Kahrs. Now that the Maybach’s passed into new hands, it looks like Hova and Yeezy will have to find a new set of wheels to get them about on their upcoming European tour.