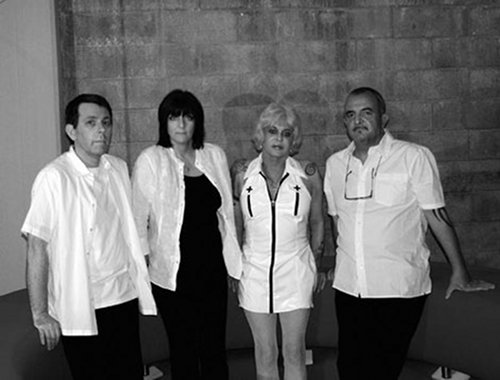 Before his untimely death in 2010, Throbbing Gristle/Coil lynchpin Peter ‘Sleazy’ Christopherson was masterminding  a reinterpretation of Nico’s 1970 Desertshore LP.

Following his passing, TG members Chris Carter and Cosey Fanni Tutti have endeavoured to shepherd his sketches to completion. As The Quietus report, the pair gave the in-progress works a live outing on Saturday, offering a number of insights into who will feature on the finished LP.

The pair were performing at the Tyneside Cinema as part of Newcastle’s 2012 AV festival. If the recordings on the night are anything to go by, recently announced Meltdown curator Antony Hegarty will sing on ‘Janitor Of Lunacy’; Einsturzende Neubauten’s Blixa Bargeld contributes to ‘Abscied’; and Enter The Void director Gasper Noe also features on ‘Le Petit Chevalier’. Cosey also provided vocals on ‘My Only Child’. The event was titled ‘Wishful Thinking: In Remembrance Of Peter Christopherson’, and also featured contributions from field recording titan Chris Watson and Sunn O))) associate Attila Csihar.

Throbbing Gristle ceased activities in the wake of Sleazy’s death; Desertshore will be the final release under the TG moniker. The band had originally recorded three days of public sessions for Desertshore at London’s ICA back in 2007; a selection of material from these sessions was released that same year in a limited edition 12xCD-R box set, entitled The Desertshore Installation. Desertshore is due on Industrial Records later in the year.