The Hacienda rebuilt inside the V&A Museum 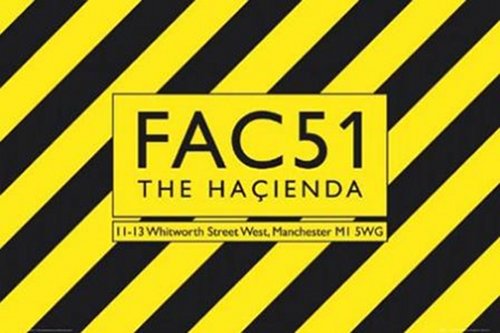 Those under the age of 35 are unlikely to have made it to The Haçienda; those over it will probably have fairly unreliable memories of their time there.

Original designer Ben Kelly has erected a small simulacra of the club inside the gallery: visitors can lap up the iconic painted girders, the neon Kim Philby bar and the general Red Dwarf ambiance in person. According to Kelly, the process involved selecting “elements that represent the design of the club, although the space is only a small fraction of the original. There are stripes on the columns, as well as black and white bollards, and we’ve recreated some of the signs. Unfortunately, we’ve not had any original parts of the club, they were all sold off, so it’s all been done from scratch.

The Haçienda was opened by Tony Wilson and New Order in 1982 at a former warehouse in Manchester; rather inauspiciously, the opening bill featured rotund shit-stirrer Bernard Manning. The club became the epicentre of the UK acid house movement, and also played host to acts including The Smiths and Madonna. After years of financial woes, the venue finally closed in 1997. Kelly speaks passionately about the importance of the club:

“It was so influential. I’m, of course, hugely honoured that they chose the Haçienda as one of the items and that I was asked to work on the overall design. I never dreamed when I took on the job 30 years ago that what I was designing would be something that people would be looking at today. When Peter Saville suggested to Tony Wilson that I do the design, I thought it would just be a bit of work. But it has become this huge thing which never goes away. I get calls in my office every week from design and architecture students who are doing projects about it.”

The model will be displayed alongside Factory artist-in-chief Peter Saville’s seminal album covers. Other examples of seminal British design include Bowie album covers, the Morris Minor, and the almighty ZX81 Spectrum. The exhibition, titled ‘British Design 1948-2012’, runs at the V&A Gallery from March 31 until August 12.