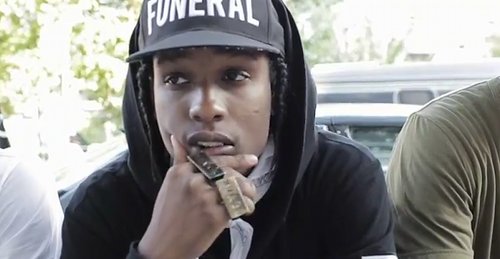 You had to be quick off the blocks to hear recent A$AP Rocky/Lana Del Rey collaboration ‘Ridin”.

The joint track briefly set the internet into conniptions of excitement, before suddenly and ignominiously vanishing. Although ‘Ridin”  was originally set to feature on a compilation from producers The Kickdrums, Rocky had apparently snaffled the track for his own album.

In an interview with Billboard sister blog The Juice, Rocky discussed his plans for the track: “I might not put it out before because people already know what it is. It sounds crazy so far though. We were just gonna call it ‘My Bitch’, but we’re not gonna get much play with that, so we called it ‘Ridin’. [It] is some Bonnie and Clyde shit”. A$AP claimed to have had a “crush” on the singer since having first seen her videos, and called himself a “huge Lana Del Rey fan”.

In the interview, Rocky also revealed that Santigold, Pharrell Williams and ‘Niggas In Paris’ producer Hit-Boy all feature. Rocky also sounds admirably level-headed about his upcoming work: “Honestly, I just want to do my best. I don’t plan on being the best rapper alive or the worst rapper alive, or even consider [myself] as a rapper. I just want to be an artist and do my best, and be a great businessman, an entrepreneur that paves the way for people, for generations to come behind me. I just want to have longevity and create a legacy for me and my boys.”