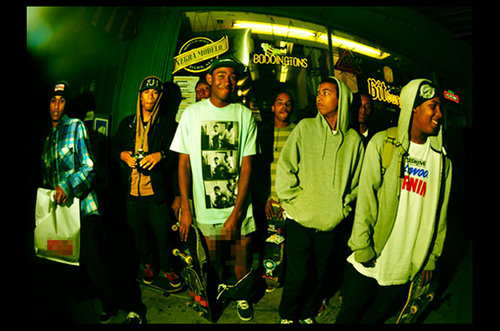 The BBC’s Newsnight is always swift to cover the big issues: international conflicts, the Eurozone crisis, and – as of last night – the politics of swag.

Anyone who made it through the debate on wealth distribution and the analysis of Rick Santorum’s campaign climbdown would have come across a bizarre feature on L.A. gadabouts Odd Future. O.F. – or, as Jeremy Paxman wearily described them, ‘Odd Future Wolf Gang Kill Them All Expletive Expletive’ – are currently touring the UK, and it seems that the Beeb were eager to use this as a cultural talking point.

The report focuses on the collective’s business model, namely their giving away of their music gratis and subsequent focus on selling merchandise (there’s also a slightly absurd “do Odd Future pay tax or don’t they?” investigative angle). Newsnight‘s attempts to “explore the paradoxes of Odd Future” are fairly unsuccessful, but there are plenty of amusing/annoying (delete as applicable) moments to enjoy. Mike G looks very, very tired; merch-man Lucaus Vercetti attempts to flog the cameraman a T shirt with his face on it; and Tyler tells beleaguered reporter Stephen Smith that they make music to  “piss old white people off like you”. You can watch the clip here (skip to the 38.30 mark)

On a related note, the slightly hipper Vice took a camera down to the Odd Future show to grab some vox pops from over-excited fans in the queue. Watch and weep.