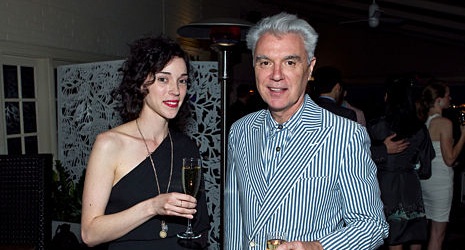 Annie Clark’s album with Byrne is set for this fall.

On Wednesday, St. Vincent’s Annie Clark announced via Twitter that she had finished an album-length collaboration with former Talking Heads frontman David Byrne. Speaking to Pitchfork at Coachella, she talked about the origins of the LP, the idea for which came about when Byrne and Clark both attended the benefit show Björk and the Dirty Projectors put on for Housing Works, a New York City non-profit that fights homelessness and AIDS.

The two originally intended to perform a similar benefit, but after writing material for the project, Byrne suggested turning it into an album instead. The songs contained on the LP involve music and lyrics written by both artists in a close-knit process, with each taking vocal duties.