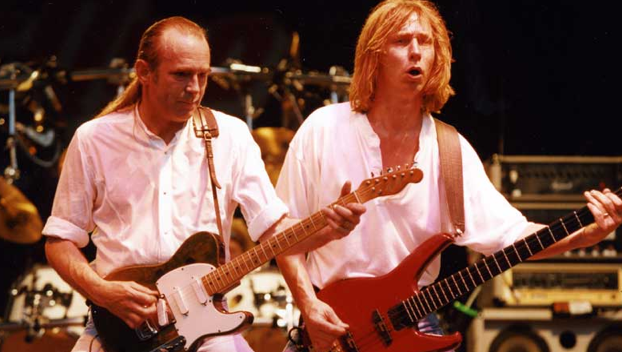 Status Quo are to star in their very own movie – not a concert movie, you understand, or even a documentary, but a “90-minute action caper”.

The film, entitled Bula Quo!, is being directed by one Stuart St. Paul, best known for his stunt work on films such as Batman, A View To A Kill and Robin Hood: Prince Of Thieves.

The veteran rockers will appear as themselves alongside Saturday Night Live graduate and US comedy staple John Lovitz and, er, Craig Fairbrass of Eastenders “fame”.

“The one thing Quo fans know is to expect the unexpected,” says the band’s Francis Rossi. “Of course, Rick [Parfitt] and I have already acted in Coronation Street, one of the biggest TV shows on the planet, so this should be no trouble at all – according to management.”

The film, which will feature 12 new Status Quo songs, is scheduled to be released next year.

In other film news: having wowed the world with his childishness in Some Kind Of Monster, Metallica’s Lars Ulrich is now the subject, or more accurately the quarry, of another documentary feature. It follows British lifestyle journalist Kate Spicer in her attempts to help her brother, Tom, who has Fragile X Sydrome (a form of autism), to achieve his dream: to meet Lars Ulrich. Its title? Mission To Lars, of course.

Slated for a limited release through Picturehouse cinemas in the UK this June, Mission To Mars‘ action takes us from Tom’s care home in Exmouth on a road trip across the States in search of the famously cranky drummer.

Spicer says: “We had this fantasy of hitting the road with Tom and recreating some of the magic of our teenage years cruising around in £100 cars, eating Burger King and listening to heavy metal on the tape deck. We thought it would be fun, bonding. We wanted to do something good for our brother. We were also sick of him endlessly asking”.

It’s all for a good cause: profits will be donated to Mencap. The soundtrack features an original score by Tunng’s Mike Lindsay, and contributions from Bob Dylan, Devendra Banhart and Blur. Here’s a clip: