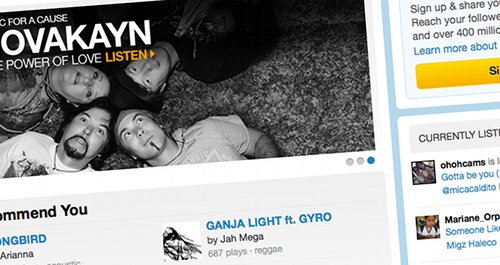 We all know Twitter is now a world-conquering, inescapable part of modern life, right?

Well, if you thought music could act as some sort of escape from it, think again. Twitmusic is gathering steam as one of the most popular music-sharing applications around, with everyone from global megastars (Bryan Adams, MC Hammer) to more underground figures (Kode9, Scratcha DVA) recently advocating its usage. Effectively, it’s a music playing service that allows users to easily share tracks on Twitter, the rough premise being that when Twitter allows news to spread quicker than ever, there’s now an outlet for good music to be spread quicker than it could through regular means, even those already prevalent on the Internet (YouTube, Soundcloud, etc).

TwitMusic also serves as a recommendation service, where like Pandora (remember that?), fans will be able to search for an artist like they, and through viewing their tastes, check out some similar music. Artists on Twitmusic also have the ability to link their uploaded songs straight through to iTunes, effectively making Twitmusic another outlet to sell music online.

The service was founded late last year. You can check it out at twitmusic.com. It’s not the only service of this sort gathering steam though: we’d also recommend interested parties to check out the more personally-focussed This is My Jam.