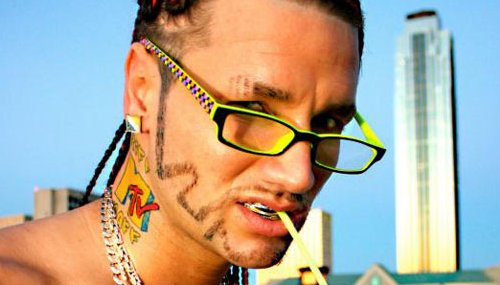 For the unfamiliar, Riff Raff is a rapper who came to (minor) fame on MTV show From Gs to Gents, where he was eliminated in the first episode. He adopted the name MTV Riff Raff, but then switched to Riff Raff SODMG (Stacks on Deck Money Gang) after being taken under the blinged-beyond-belief wing of Soulja Boy, whom he often appears dancing with on YouTube in a disconcertingly hypnotic manner. He’s also had his odd moments of quality – ‘Bird on a Wire’ [embedded below], a collaboration with fellow newcomer Action Bronson, is pretty brilliant for one.

The next step in Riff Raff’s topsy-turvy career, it seems, is to sign with Diplo’s Mad Decent label. Riff Raff revealed to Fuse earlier this week that he’d inked a five year deal with the label – who also release music from Rusko, Major Lazer and more – and that an advance of sorts came in the form of a $45,000 Mad Decent chain. It features “egyptian blacklight amethysts and nepalese mayonaise tinted topaz”, in case you were wondering.