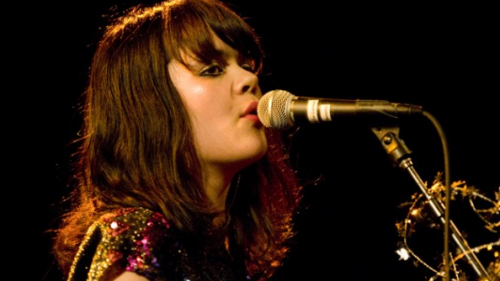 Kohl-eyed fabler Natasha Khan will be returning as Bat For Lashes with a new album later this year.

As revealed yesterday, The Haunted Man is due on October 15. Khan played her first UK live show in two years last night in Cambridge. Prefix point towards video footage of three new tracks, each of which offer an insight into what we can expect from the Brighton singer’s next offering. As per signature track ‘Daniel’, two of the tracks (‘Laura’ and ‘Marilyn’) are named after individuals; the third, ‘A Wall’, presumably isn’t, unless Khan’s a big golf buff.

‘Laura’ – the “first song that’s going to come out”, and no relation to the Scissor Sisters smash – sees Khan comforting a wayward friend (sample lyric: “Laura, you’re more than a superstar”). It’s a lilting piano ballad, and a dangerously schmaltzy one at that. The woozy ‘Marilyn’ sounds much, much more promising, combining a Casiotone bassline with King Night choirs and all some fancy vocoder-work. ‘A Wall’ also scrubs up pretty well, sounding like Bjork at her most sylph-like. Khan, as ever, is a winsome and charming presence onstage. Scroll down to enjoy clips of all three tracks; Khan’s tour dates are also available below.