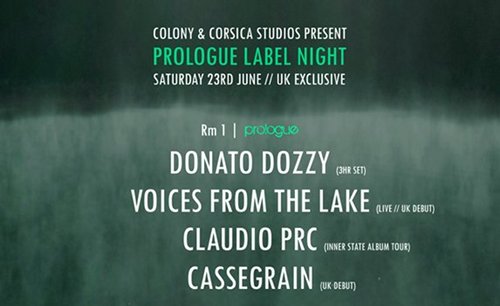 Colony is heading to Corsica Studios for a night of delights by turns dreamy and pummelling.

On June 23, German techno label Prologue will be rocking up with an assortment of banner artists. Top of the bill in Room 1 is Italian mesmerist Donato Dozzy, whose signature combination of hyper-repetitive techno and trance flourishes is as vital as ever. Having spent over two decades in the game, he’s a classy and sensitive selector in a live setting. It won’t be Dozzy’s only appearance on the night: he’ll also be offering the London debut of his Voices From The Lake project with Neel. Their s/t debut was all crawling tempos and amniotic textures, should provide one of the dreamier moments of the evening. Sardinian Claudio PRC will be keeping things dark, and Cassegrain will be making their UK live debut.

Room 2 will feature some altogether musclier fare. Sigha will be sticking to the vinyl for a heavy set with nods towards industrial, and Perc Trax stompers Forward Strategy Group will also be making a sublime racket. Isodyne and Tengui will also be stopping by, as will hosts MB & CB.

The night runs from 10.00pm until 7.00am. Tickets and further information are available here.

FACT have two pairs of tickets to give away to the event. Each winner will also receive a copy of Voices From The Lake’s debut LP, out this year on Prologue. In order to nab yourself a prize, fire an email over to competitions@thevinylfactory.com, including the word ‘Colony’ and your name in the title field.