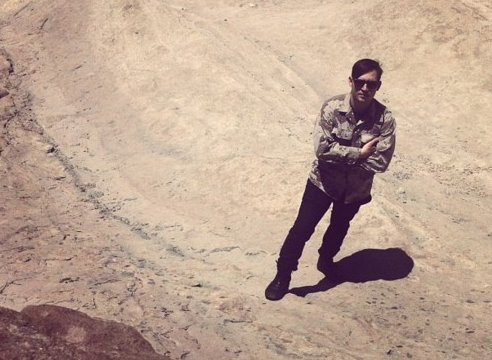 The label will present the UK live debut of Vatican Shadow, Dominick Fernow’s acclaimed “militant religious industrial” project – apparently this is an exclusive, and there will be no other VS shows in this country, at least not in 2012.

Vatican Shadow started out as just one of the many different aliases that Fernow (pictured above) uses to release music on his own Hospital Productions label, but the project soon took on a life of its own, and in recent months has arguably eclipsed the now LA-based artist’s work as Prurient. Its sinister, isolationist and seductively rhythmic sound is partly inspired by the techno of FUSE, Polygon Window, Sandwell District, etc, while the ethno-industrial offerings of Muslimgauze have also played a significant shaping role not just on the music, but on the deliciously paranoid, War On Terror-obsessed aesthetic – what Fernow describes as its “atmosphere of degeneration”. 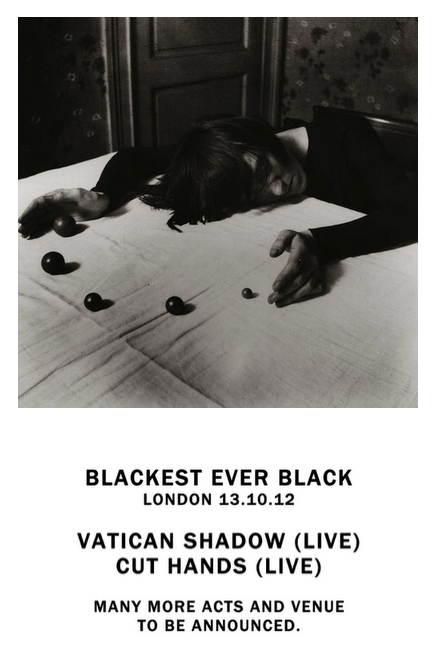 Vatican Shadow’s one and only album, Kneel Before Religious Icons, was reissued on vinyl by Type earlier this year, while two tracks from his debut tape, Byzantine Private CIA, were hand-picked and remastered for a 12″ release on Blackest Ever Black back in March, Iraqi Praetorian Guard, accompanied by a remix from Regis. This last two months have seen Fernow launch of Bed Of Nails, a new imprint dedicated to Vatican Shadow and related projects, and release two collaged-based VS zines via Hospital Productions.

Joining Vatican Shadow for the Blackest Ever Black label night will be Cut Hands, aka William Bennett. Bennett, founder of Whitehouse, is another purveyor of extreme electronics whose embrace of rhythm – in this case intense, fit-inducing polyrhythms played on African percussion instruments – has earned him a new and appreciative audience. Following the release of last year’s Afro Noise I album, Cut Hands has a new single, ‘Black Mamba’, due out in July on Blackest Ever Black, ahead of a sophomore full-length on Susan Lawly in Autumn.

Blackest Ever Black [full disclosure: independently operated by Kiran Sande, a FACT staff member] is home to gothically-charged releases from Raime, Tropic of Cancer, Young Hunting and others. Cut Hands headlined the last B.E.B. London showcase in October 2011, on a bill that also featured Raime, Regis and a one-off reunion set from British Murder Boys. Apparently “many more” acts are yet to be announced for the 2012 show, a co-presentation with BleeD, in the coming months; while the venue will be revealed, and tickets made available, “very soon”. In the meantime you can find more information here.