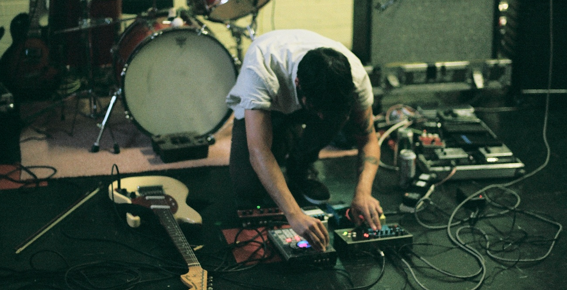 Southern Records’ Latitudes imprint is to release The Men Parted The Sea To Devour The Water, a recording of a live session by The Haxan Cloak.

The ‘Cloak, aka London-based Bobby Krlic, earned much acclaim for his debut, self-titled LP of 2011 – released on Aurora Borealis, it was a terrifically assured synthesis of dark ambience, grinding electronics and neo-classical composition. He has since signed to Tri Angle (home to oOoOO, Evian Christ, Balam Acab et al), and is a working on a new album for the label; The Men Parted The Sea serves as a stop-gap until it materialises. As stop-gaps go, it’s a generous offering, comprising half an hour of audio.

“This recording is about trying to re-interpret my own work, I think,” says Krlic. “I never want to give a straight recreation of any of my recorded material when I play live – one reason is because it is too logistically difficult, but the main reason is that I just don’t think it suits me as a performer; it makes me feel uncomfortable. I like to treat performance as a composition also – a different beast. So on this Latitudes session, and when I play live generally, I think of it as me remixing my own work essentially. If my recorded music so far exists within one sphere, I’d like to try and move the live element to a completely different sphere – I don’t like the notion of being stuck in one place, or pigeon-holed, I guess.”

The LP is officially out on July 9 in a limited run of 700 180g white vinyl and 500 CDs, both featuring original foil-stamped artwork by Krlic, and all hand-numbered. More information here.