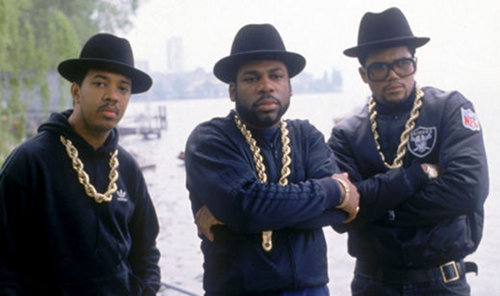 Update: Run-DMC, it seems, will definitely be reuniting to share a stage once again. Exclaim report that the pair are scheduled to appear together at Austin’s Fun Fun Fun Fest in early November.

The news arrived in a short promo clip (incldued at the bottom of this post) for the festival, which leaves you in little doubt that Queens’ finest will be appearing. DMC will also perform a solo set at the event, which runs from November 2-4. Fun Fun Fun Fest has a pretty niftly line-up thus far: Danny Brown, Rakim, Bob Mould and Atlas Sound are all confirmed to play.

AllHipHop claim to have it on good authority that Run and DMC have privately confirmed the reunion. A “source close to both camps” has claimed that the reunion is now set in stone, and is reported as saying “Run-DMC is definitely back together, and it’s a great day for hip-hop”. The news, which emerged on Friday, doesn’t appear to have been corroborated elsewhere as yet.

Run DMC haven’t been active as a unit since 2002, when Jam Master Jay was shot as he left a recording studio in Queens. The murder remains unsolved. At the time, Run was categorical about the group no longer having a future as a duo: “We can’t perform anymore. Nobody wants to see Run-DMC without Jay. Run-DMC is officially retired. I cannot get out in front of my fans with a new DJ. Some rock bands can replace the drummer and I don’t know any other way but to be the three original members. That’s all I can say. We are retired.” The group opted not to reunite for their 2009 induction into the Rock & Roll Hall Of Fame.

Run-DMC remain one of the most important hip-hop ensembles of all time. Founded in 1981, the group went on to have a crucial role in shaping the development of hip-hop in its first decade.  The trio’s 1984 LP Run-D.M.C was the first rap record to go gold, and 1985’s King Of Rock went platinum. 1986’s Raising Hell, meanwhile, is one of the most essential hip-hop records of any era. Since the group retired, Run has been trawling the reality TV hinterlands with his MTV show Run’s House. He also released a little-loved solo LP, Distortion, in 2005. DMC has had a quieter decade, releasing 2006’s Checks Thugs And Rock N Roll and appearing in a documentary about adoption.