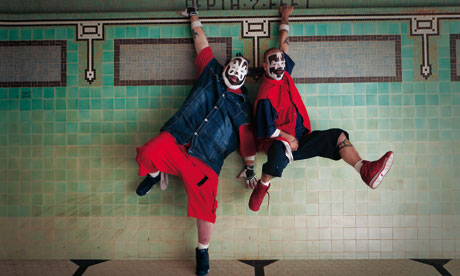 It’s that time of year again: the Insane Clown Posse has announced the lineup for 2012’s Gathering of the Juggalos.

The Gathering of the Juggalos is an annual event, wherein Insane Clown Posse’s fanatical Juggalo subculture descends on Cave in Rock, Illnois for five days of Faygo-soaked mayhem.

Along with ICP and their entire Psychopathic Records family, the surprisingly entertaining lineup includes George Clinton and Parliament Funkadelic, the Pharcyde, Danny Brown, Raekwon, DMX, Master P, Geto Boys, Tech N9ne, Kool Keith, Warren G, and Biz Markie. And because nu-metal never died for the Juggalos, P.O.D., Soulfly, Static-X, Fear Factory, Mushroomhead, (Hed) PE, and Kottonmouth Kings will also perform. Along with a comedy stage and a host of wrestlers including living legend Ric Flair, the Gathering promises to be an irony-free tribute to low culture.

The Gathering of the Juggalos takes place August 8 – 12. This year’s promotional infomercial is exactly as absurd and over-the-top as you would expect; see how many of the 23 minutes you can stomach.