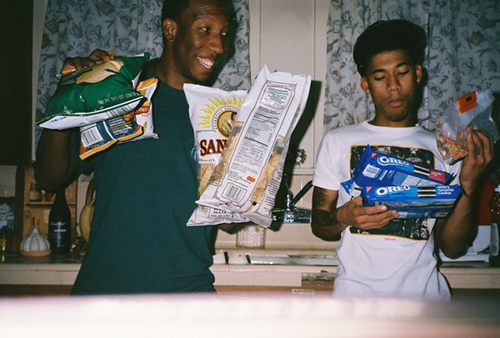 In a year when plenty of Odd Future have felt the warm glow of the spotlight, MellowHype have kept a fairly low profile.

Odd Future’s prodigal son, quirky cousins, and boy-done-good have garnered most of the attention, but MellowHype – the union of Hodgy Beats and Left Brain – have also been putting out pretty vital work. This year’s smoggy, hazy ’45’, was easily up there with the best parts of 2011’s BlackenedWhite. Hodgy Beats, meanwhile, released the shamefully underrated Untitled EP. MellowHype now have a new album on the way, titled Numbers. ‘‘Fakuoy’ is the first taste, and it’s definitely got the appetite going.

Hodgy is on fierce form, barely letting a couplet go by without a neat sleight-of-trope (“my flow is warmer than jackets”) or kooky intervention (“I got a question: who made these guys administrators?”). Left Brain’s beats are often lumbering and belligerent, but the ‘Fakuoy’ beat – a gossamer-thin synth figure, surrounded by a corona of light  – is barely there. Hodgy’s a versatile and nimble MC, and this rice-paper canvas brings his talents into sharp relief. Click here to download.