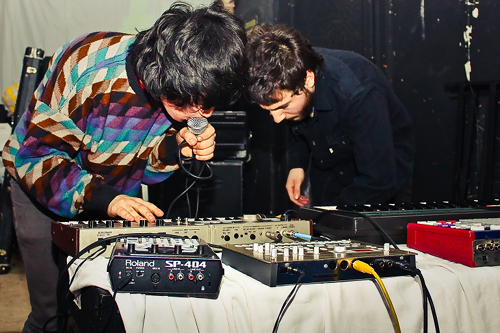 A host of great acts have played penpal for fledgling Russian artists as part of a curious global scheme.

Over the last few months, Moscow magazine Look At Me have offered obscure Russian acts the chance to have a track produced by well-known contemporaries from the UK and North America. The winning acts were also offered the chance to perform in showcases Primavera and EXIT. Ten artists were whittled down from 600 submissions, and the resulting collaborative mixes have now been made available to stream in full.Teengirl Fantasy, Nite Jewel, Maria Minerva and D/R/U/G/S are among the contributors donating their time and mixing abilities; Arcade Fire’s Jeremy Gaya, Thieves Like Us and Dent May also feature.

There’s some fascinating stuff on the tape. Teengirl Fantasy take Curd Lake – a “chillwave project from a small military town somewhere in Siberia” – under their wing, and add some dreamy gloss to the dinky original. Saint Petersburg trio Ifwe are clearly a good fit for Nite Jewel, whereas Maria Minerva’s role on Rosemary Loves A Blackberry’s ethereal electro piece is trickier to pinpoint. [via Ad Hoc]