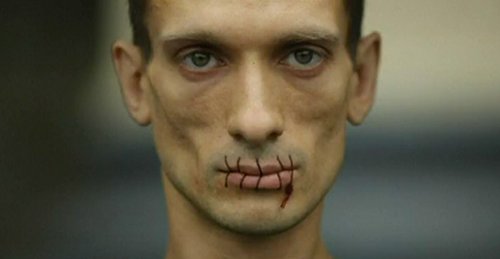 The Russian artist who made headlines yesterday speaks to Dazed Digital about his eye-catching act of protest.

Protests in Russia against the imprisonment of three members of feminist punk group Pussy Riot, themselves jailed for an anti-Putin protest back in February, have reached fever pitch. Nothing made this clearer than Petr Pavlensky, a Russian artist who sewed his mouth shut while holding a banner that read “Pussy Riot act is a replay of a famous act by Jesus Christ.”

The shocking sight of Pavlensky’s sewn lips has raised the international profile of the protests. In the interview with Dazed, Pavlensky identifies himself as an artist practicing contemporary art who was educated at the Industrial Academy and Institute of PROARTE.

Asked what he wanted to say with the act, Pavlensky said: “Sewing up my mouth, I showed the situation of the contemporary artist in Russia, living in an environment where there’s a ban on publicity, the tightening of censorship and suppression of public statements in contemporary art.”

The three imprisoned Pussy Riot members, Maria Alyokhina, Nadezhda Tolokonnikova and Ekaterina Samutsevitch, remain in jail on a charge of “hooliganism” and face up to seven years in jail for their crimes. Tolokonnikova has since gone on hunger strike.