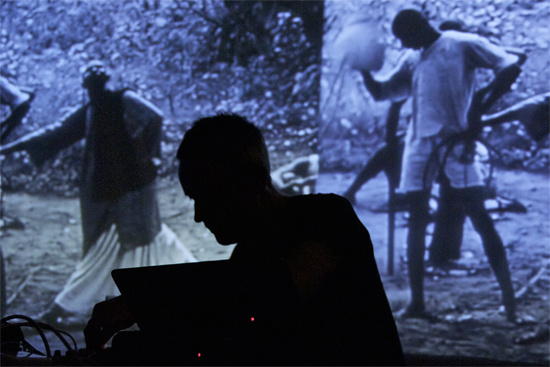 Black Mamba, the follow-up to 2011’s acclaimed debut album Afro Noise Vol.1, which found Bennett using combining furious African percussion sounds with electronic synthesis, sequencing and processing to create a sonic barrage unlike any we’d heard before. By the same token, the project also found Bennett creating some of the most accessible, at times even beautiful music, of his career. ‘I’m Comin’ Up Your Ass’ it was not.

It’s been known for some time that Bennett would be releasing Black Mamba through his own Susan Lawly label in Autumn 2012, but he’s now shared the tracklist too, via his blog (see below). The artwork has yet to be revealed, but you can bet your bottom dollar that it will be one of the ‘veve’ illustrations by Mimsy DeBlois that has graced every Cut Hands release to date.

The title track from Black Mamba is being release as 12″ vinyl-only single (b/w ‘Krokodilo Theme’) next week, on Blackest Ever Black [full disclosure: a label operated by FACT staff member Kiran Sande]. Music from the album also features extensively in the soundtrack of the upcoming Reincarnated, Vice’s documentary feature about Snoop Dogg‘s time in Jamaica.