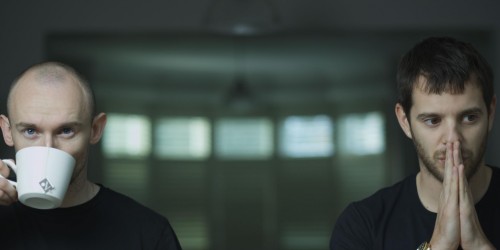 The artist formerly known as The Streets and ex-The Music singer Rob Harvey share details of their collaboration.

The D.O.T.’s debut LP is entitled And That and features collaborations with Detroit rapper Danny Brown and vocalist Claire Maguire. The 11 track LP will be released on October 22, and the band will tour the UK in support of it.

As announced this summer, the duo whittled down 60 songs to craft the album, which ranges from “straight pop songs” to “dancey” numbers. Previously, they have shared songs through their website.

Watch the video for lead track ‘And a Hero’ below. Tour dates and the album’s track listing follow, via NME.

Tracklist:
1 And A Hero
2 You Never Asked’ (featuring Clare Maguire and Danny Brown)
3 Goes Off
4 Weapon Of Choice
5 Shut Up And Keep Talking
6 Like You Used To
7 What You Livin’ For
8 Right Side Of Madness
9 Strong Skunk
10 Colours That Don’t Exist
11 Where Did I Go