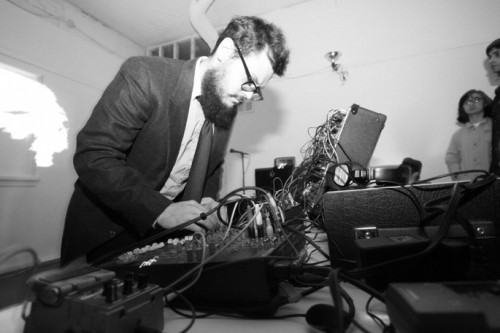 M. Geddes Gengras is something of a serial collaborator in the LA scene centred around the Not Not Fun camp.

His CV includes work with Amanda Brown’s Pocahaunted and LA Vampires projects, and Britt Brown’s doom/drone group Robedoor. He’s perhaps best known, though, as Sun Araw’s wingman in a recent collaboration with reggae legends The Congos, giving rise to the ICON GIVE THANK album released on RVNG Intl back in March.

Gengras’ solo back catalogue is less well known but no less substantial, largely confined to cassette releases on the likes of Digitalis and his own Peccant Tapes imprint. He’s now announced a new solo album to be released through Holy Mountain, the label responsible for skunk-fuelled transmissions from Om, Wooden Shjips and others [via Exclaim].

Test Leads explores expansive, icy kosmiche stylings across four sprawling synth work-outs – quite a shift from the dub haze of ICON GIVE THANK, perhaps, but certainly not without precedent in Gengras’ output.

The album is due for release on October 30. You can hear snippets here – full tracklist below.