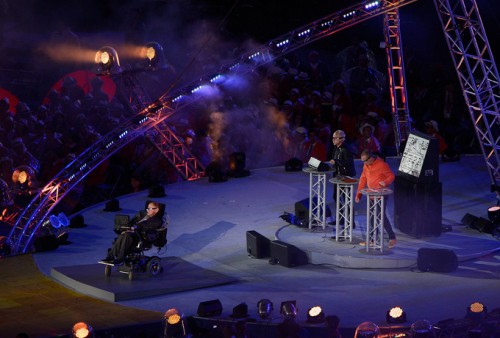 By all accounts, the London Paralympics opening ceremony was something of a spectacular.

Although far from as batshit loopy as Danny Boyle’s psychotropic pageant of the absurd, last night’s extravaganza had plenty of unlikely set-pieces: a two-storey apple,  a Higgs-Boson particle made of umbrellas and the sight of a confused looking Ian McKellen brandishing a placard all made indelible stains on our retinas. For our money, though, the strangest section of the night was a duet between esteemed physicist Stephen Hawking and rave grandfathers Orbital.

The clip below shows the pair performing ‘Where Is It Going?’, taken from their recent album Wonky, before briefly segueing into a live punk version of Ian Dury’s flag-waving 1981 classic ‘Spasticus Autisticus’. Hawking, kitted out with Orbital’s trademark LED glasses, overlays Orbital’s trance instrumental with a call to “transform our perception of the universe”. It’s gaudy stuff, and there’s a heavy waft of naffness about the whole affair, but it’s wonderful fun nonetheless. We’re not entirely sure why the Brothers Hartnoll haven’t come under the same stick as George Michael for using their appearance to hawk new material, but when Dad dancing is this hypnotic, who cares?

The Paralympics run until September 9. The ceremony garnered a peak audience of 11.2m UK viewers, the highest Channel 4 viewing figures in a decade.