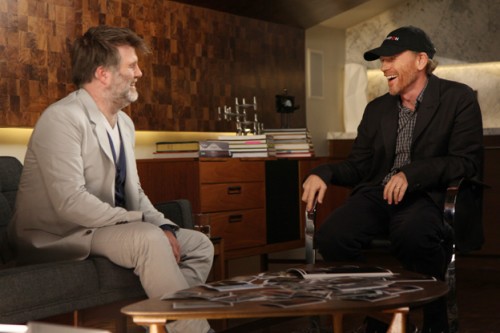 As Rolling Stone reports, Ron Howard will mentor James Murphy as he works on a short film this fall. It will be a part of a series of shorts inspired by the winning photography submissions in a Canon contest.

The characteristically neurotic Murphy admits that the whole affair is still strange to him. “Now I’ll be able to call Ron Howard, which is super weird… This is the beauty of having been in a band that did well enough, I guess. You have access to something as crazy as this,” he said.

This will be Murphy’s second high profile film in recent memory, as his final LCD Soundsystem shows were documented in Shut Up and Play the Hits. Earlier today, Murphy was announced as part of Corsica Studios’ tenth anniversary celebration.

While Murphy shows no signs of slowing down, neither does Ron Howard. The child star turned blockbusting director, is no stranger to musical collaborations: he’s set to film Jay-Z’s Made in America Festival this weekend.